Khan confident he can beat Crawford with speed

By Chris Williams: Amir Khan (33-4, 20 KOs) is confident that he’s going to pull off a big upset by defeating the unbeaten WBO welterweight champion Terence Crawford (34-0, 25 KOs) with his speed, intelligence, size and experience next month on April 20 on ESPN pay-per-view at Madison Square Garden in New York.

Khan admits that he’s the underdog in this fight, but he feels that the boxing world is wrong in them picking Crawford to win. Khan wants to prove them all wrong by going out there and boxing his way to a decision. He doubts that he’ll be able to knockout Crawford, but he does feel he’s got the boxing skill-set to get the job done against him.

In terms of experience, Crawford hasn’t been tested against anyone of note at welterweight since moving up to the weight class. Crawford has beaten Jose Benavidez Jr. and Jeff Horn. Both of those fighters are flawed, and not considered to be one of the best in the division. Horn is a fighter that captured the World Boxing Organization welterweight title in 2017 in roughing up Manny Pacquiao in Brisbane, Australia and winning a controversial 12 round decision. Horn lost to Crawford in 2018 by a ninth round knockout. Crawford recently stopped Benavidez Jr. in the twelfth round last October.

The part where Khan says Crawford has a resume is a point that many boxing fans would take issue with. The truth is, Crawford’s that great. He’s matched carefully by his promoters at Top Rank, who have quite skillful with the way they’ve matched him. Like we’re seeing with Top Rank matching heavyweight Tyson Fury against Tom Schwarz on June 15 in a showcase fight for Fury, the promotional company has been doing a lot of skillful match-making with Crawford. His best wins as a pro have come against these fighters: Jose Benavidez Jr., Jeff Horn, Yuriorkis Gamboa, John Molina Jr., Viktor Postol, Felix Diaz, Julius Indongo, Dierry Jean, Hank Lundy, Thomas Dulorme, Raymundo Beltran, Ricky Burns and Breidis Prescott. Khan would likely beat most of those guys. The top light welterweights – Regis Prograis, Ivan Baranchyk, Jose Ramirez, Kiryl Relikh and Maurice Hooker would likely beat all the fighters Crawford has faced. The fact is, Crawford’s resume is weak, and we don’t know how good he is. His wins over Horn and Benavidez don’t say much, because those aren’t elite welterweights. It wouldn’t be surprising if Crawford does lose to Khan, because he’s not faced really good fighters. Crawford has just been skillfully matched. Top Rank didn’t put Crawford in the World Boxing Super Series 140 lb tournament, and he was never matched against arguably the best fighter in the division in Prograis. Now at 147, Crawford hasn’t faced Errol Spence or Keith Thurman, who are viewed as #1 and #2 in the weight class.

“He’s up there in the top five in the pound-for-pound,” Khan said about Crawford. “There are a lot of great fighters in boxing. He’s up there. I don’t have him at #1 or #2. He is very dangerous. He is very tough to beat, but I really believe I have the skills and the tools to do that. I don’t think Crawford has proven himself in the welterweight division as of yet. To beat him will be even harder, but I believe I can do this,” Khan said.

For Khan to beat Crawford, he’s going to need to be aggressive like he did in his win over Phil Lo Greco. Starting fast against Crawford is a must. Khan can’t just give away rounds and expect to win on points. Throwing single shots against Crawford is not the way to win. Like a lot of counter punchers, Crawford struggles when he’s dealing fighters that throw combinations. If you look at the fights where Crawford had problems against Gamboa, Dulorme and Postol, he looked bad when those guys flurried on him. Crawford was boxing Postol for most of the fight. In the 12th, Crawford decided to stand and fight, and Postol was lighting him up with shots and forced him to go back to moving around the ring. Crawford got the worst of it when Postol started throwing combinations. If Khan can unload on Crawford with speedy combinations, he can catch him with a shot he doesn’t see, that could could be game over for him. Crawford is good at countering fighters that throw one shot at a time, but when throw a lot, he’s overwhelmed and not equipped to fight that type of contest.

“I was at the top before. I can be back at #1, I believe, and I want to be back there again,” Khan said. “To do this, I have to beat Crawford. I was motivated against Canelo, but he was the bigger guy. He just put me with a big shot and put me away. In this fight against Crawford, I have to be in my best shape ever. I can’t make any mistakes against him. He’s up there as one of the best pound-for-pound fighters in the world, he’s dangerous and unbeaten,” Khan said.

Khan was one of the top 140 lb fighters eight years ago in 2011, but he never proved that he was the #1 guy. When he did try and prove it, he lost back to back fights to Lamont Peterson and Danny Garcia.

A victory for Khan over Crawford won’t make him the #1 fighter at 147. Since Crawford isn’t considered the number one fighter at welterweight, a win for Khan won’t suddenly make him the #1 guy at 147. For Khan to be the top guy at welterweight, he’ll need to beat Errol Spence, because the perceived #1 fighter at welterweight in the eyes of the boxing public. Crawford is arguably #3 at 147 behind Spence and Keith Thurman. For Khan to become the top welterweight, he’s going to need to win his fight on April 20 against Crawford, and then defeat Spence to take the #1 spot. Since Crawford is #3 at 147, a logical move for Khan would be for him to take the next ranked guy in Shawn Porter followed by Thurman and then finally Spence.

“Everyone is thinking he’s going to win quite easily, but this is where I can cause a big upset,” Khan said about the boxing world thinking Crawford is going to beat him. “This is my time. This is the peak of my career. Physically, I feel stronger. I have speed on my side. When I compare myself to where I was at three to four years ago, I feel a lot better now than I did. This is going to be a tough, don’t get me wrong. There are times where we’re going to have to dig deep. Crawford is one of those fighters who is going to come to fight. If he wants to come fight me, I’m always going to be there, standing there. If he wants to come forward, there’s going to be a lot of exchanges. I prefer he come to me so he’s not running,” Khan said.

Crawford is a counter puncher, so he’s going to be waiting a lot by the ropes, looking for opportunities to counter Khan. When Crawford does go on the attack, he gets hit, and he looks slow and not great in terms of his stamina. Moving up in weight robbed Crawford of a lot of the speed that he once had. But also he’s getting older name, and can be hit more than he did in the past when he was younger. Crawford is also fighting bigger guys that are younger and more talented than the weak opposition that Top Rank has been feeding him over the years. Even the hardcore boxing fans gave Crawford a pass when he was matched against Indongo, Diaz and Molina rather than Prograis and Baranchyk. Crawford has been matched well by being put in against beatable fighters, but he’s clearly not been tested other than in his fight with Gamboa in 2014. That was a case of Crawford fighting an old small guy, who has been plagued with activity problems with his career.

“I can’t see myself stopping Crawford,” Khan said. “I see it going the distance, and me winning on points. I feel like I’m the better boxer of the two, and I can take it all the way to the end and win on points. It’ll be amazing to be the WBO champion and to beat a pound-for-pound fighter. God has given me this chance to get one win to where I need to be rather than having three or four fights. If he make me chase him, and I catch him and he’s countering me and he’s too quick and too sharp, then it’ll be a hard fight,” Khan said.

Knocking out Crawford is possible. Khan is selling himself short. If you saw Crawford’s fights with Diaz, Horn and Benavidez, he looked like someone that could be knocked out if he’s hit a lot. Crawford looked shaken up by the short 5’5″ Diaz when he got hit hard by him. Crawford’s chin is no better than any fighter. He’s just someone that has been matched well, and does a lot of counter punching. Crawford’s power isn’t at the level as guys like Danny Garcia, Keith Thurman, Spence, Dulorme and Egidijus Kavaliauskas. Crawford counter punches, jabs and moves around the ring. 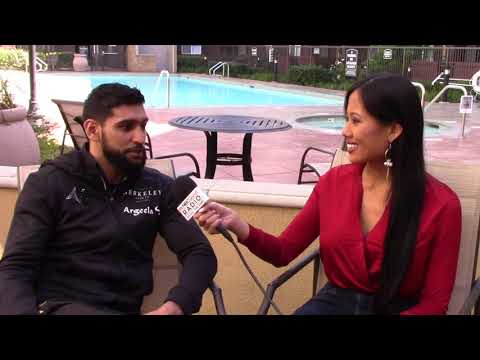 Tyson Fury says of Deontay Wilder: “The fights got to happen” »