Hearn wants Andrade or GGG for Jacobs after Canelo fight 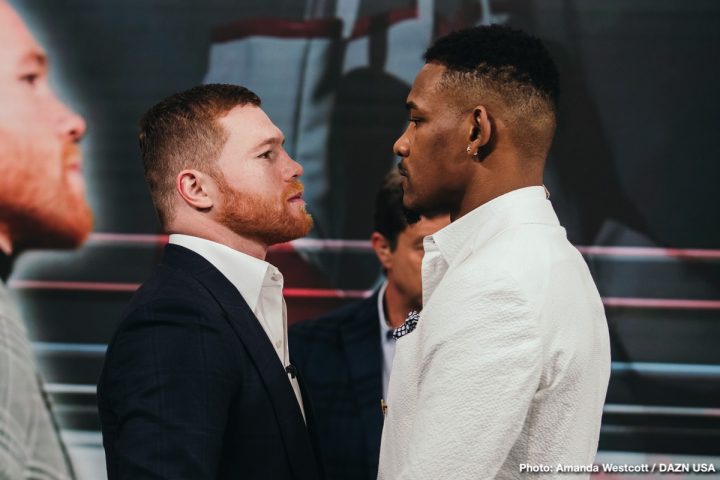 By Sean Jones: Matchroom promoter Eddie Hearn is already planning ahead for his fighter Daniel Jacobs for his next after his May 4 unification match against WBA/WBC middleweight champion Saul Canelo Alvarez, towards a fight with either Gennady Golovkin or WBO champion Demetrius Andrade.

Jacobs, 32, has to do hi job against Canelo first though in their fight on May 4 on DAZN at the T-Mobile Arena in Las Vegas, Nevada.

Hearn doesn’t seem to care which of the two Jacobs (35-2, 29 KOs) fights after Alvarez, since it would be a big deal for him regardless. In addition to those fights, there would also be a chance for Jacobs to battle Canelo (51-1-2, 35 KOs) in a rematch.

Alvarez is interested in unifying the middleweight division by winning the last 2 belts not already in his possession with the IBF belonging to Jacobs and the WBO strap held by Andrade. Hearn thinks that’s amusing, because he feels that his fighter Jacobs will take Canelo down to defeat, and then go onto the other appealing fights with Triple G, if he signs on with DAZN, or the Matchroom promoted Andrade.

“Canelo wants to prove he’s the best and that’s good, but we also want to sweep the division, and there’s Demetrius Andrade,” Hearn said to ESPN Deportes. Since we started working with him, we thought about making him an undisputed champion, but first we have to beat Canelo. I see Daniel very confident, he recognizes that he will have a tough fight and respects Canelo, but we feel he is a bigger, faster and stronger fighter, he has all those things that will give us a 50-50 fight,” Hearn said.

Jacobs, 5’11 1/2″, is definitely a lot taller than Canelo. When the two stand next to each other, it looks two guys that are a couple divisions apart from one another. Canelo looks like a welterweight standing next to a big middleweight. If Jacobs is able to take advantage of his size in this fight, he’s got a real shot at defeating Canelo to take his two titles from him. Golden Boy Promotions might be still drunk on Canelo’s success from his wins over Rocky Fielding and GGG, and not realize that Alvarez is not as invincible as they think he is.

Canelo could have lost both of his fights with Gennady with a different set of judges working them. As far as Canelo’s victory over former WBA World super middleweight champion Rocky Fielding goes, Golden Boy unquestionably chose the weakest of the champions at 168 for him to fight.

There are even contenders better than Fielding. The win for Canelo over Fielding is a hallow one, showing only that he could beat a fighter that is more of a fringe level contender type of fighter, and not a championship level fighter in the same mold as Callum Smith, Rob Plant, Gilberto ‘Zurdo’ Ramirez, Jose Uzcategui, Billy Joe Saunders or Chris Eubank Jr.

Hearn views the Canelo vs. Daniel Jacobs fight as being one that is “50-50” when they meet up in two months from now. Even though Canelo’s two fights with Golovkin were controversial, he still rates him as the #1 fighter in the middleweight division. What’s interesting also is Hearn believes Jacobs is #2 in the middleweight division, despite him having lost to Golovkin. The recent controversial defeat by GGG to Canelo has him demoted to #3 in the 160 lb weight class in Hearn’s view. Canelo and Jacobs both believe that as well. They both see Golovkin as the #3 guy now.

“We feel he is a bigger, faster and stronger fighter, he has all those things that will give us a 50-50 fight,” Hearn said about Jacobs being bigger and supposedly stronger than Canelo.

Hearn says if they don’t do the Jacobs-Andrade fight after Canelo, then he’ll look to match Jacobs with Golovkin, if he inks with DAZN. Golovkin hasn’t made a decision yet which network platform he’ll be signing with, but Hearn says his decision is “imminent.” He doesn’t know when, but he feels that Golovkin is close to making it known which platform he’ll be signing with. Most believe it’ll be DAZN. There’s a rematch clause in the contract for Canelo with his May 4 fight with Jacobs. So if Canelo loses to Jacobs, then those two will likely face each other in a rematch, which is a good thing for Daniel. Fighting Canelo twice in a row would be a dream come true for Jacobs, and a much bigger deal for him than to face Andrade or a rematch with Golovkin. Jacobs inst going to turn down a rematch with Canelo, because it would give him another huge payday, and a chance to show the boxing world that he’s a better fighter than him. It might turn Jacobs into a bigger star than Canelo, but it would at least show the hardcore and casual boxing fans that he’s a more talented fighter than him.

Jacobs didn’t look very powerful in his last three fights against Sergiy Derevyanchenko, Maciej Sulecki and Luis Arias. Jacobs’ power doesn’t seem as good as it was four years ago in 2015. One reason for that could be all the weight that Jacobs has to take off to make the 160 lb weigh-in limit for his fights. Jacobs looks drained each time he makes weight for his fights nowadays, and it could be that he’s getting diminishing returns after years of melting don 160 to fight in a division that is well below his normal fighting weight. It’s quite possible that Jacobs’ body is telling him something by him looking weak now in his middleweight contests.

If Jacobs moved up to 168 to fight at super middleweight, he would likely be stronger, feel better, and look better. Unfortunately, there aren’t any Canelo-like stars at super middleweight for Jacobs to fight. The biggest names at 168 now are Eubank Jr. and Saunders, and neither of them might not even be the best fighter in the division. Another reason for Jacobs’ lost power is the movement that he’s now making. Jacobs used to be a seek and destroy level fighter through most of his career, but ever since his fight with Golovkin in 2017, which he lost, he’s turned into a mover. The movement that Jacobs uses in his fights has robbed him of his punching power.

If Jacobs beats Canelo, then a fight with Golovkin is a given if he signs with DAZN. Even if Jacobs loses to Canelo, there’s still a very good chance that he’ll meet up with GGG for a rematch in the near future. The reason for that is there’s currently just three good middleweights that fight on DAZN in Canelo, Jacobs and Andrade. If Golovkin signs with them, then those are the three he’ll be fighting. Those are all good match-ups. Andrade will be fighting in June in Rhode Island. He doesn’t have an opponent yet. Hearn would like to put the Andrade vs. Saunders fight together if Billy Joe moves back down to 160.