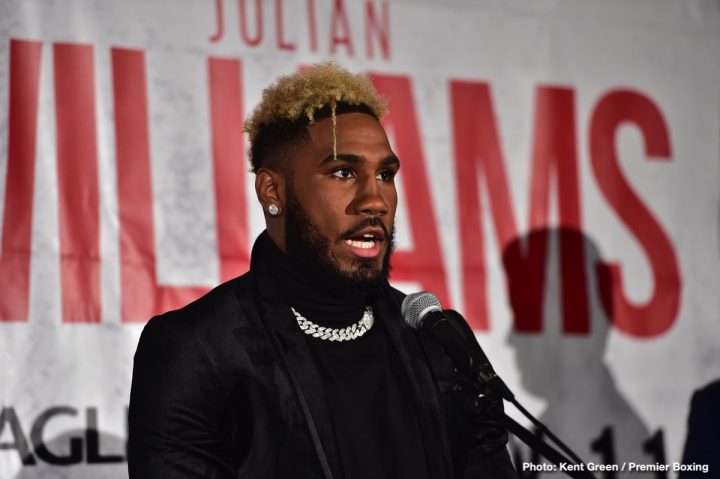 By Dan Ambrose: Jarrett Hurd says he overestimated Mikey Garcia going into his March 16 PPV fight against Errol Spence Jr. in Arlington, Texas. IBF/WBA junior middleweight champion Hurd, who may be the best fighter in the 154 lb division today, says he didn’t underestimate Spence’s ability to win the fight, since he felt he was going to get the victory all along, but he thought Mikey was capable of more than what he showed.

Spence (25-0, 21 KOs) surprised Hurd, as well as many other boxing fans, by taking the previously undefeated Garcia (39-1, 30 KOs) to school in winning an embarrassingly easy 12 round unanimous decision by the scores 120-107, 120-108 and 120-108. Hurd says Spence didn’t win the fight because Mikey went up two weight classes to challenge him. He won because he has the boxing skills to do the job on Mikey. In other words, Mikey would have lost just as bad if the two of them were both fighting in the same weight class. It was a situation where the 2012 Olympian Spence was better trained and more talented than Mikey. It makes sense. Spence is an Olympian, who has been surrounded by the best coaches and fought against the best in the world. In contrast, Mikey has Robert Garcia as his trainer, and his amateur career was nowhere near what Spence had. Mikey has become over-reliant on his power, and he failed to learn the skills that Spence showed against him.

“He was great,” Hurd said to Fighthub about Spence’s performance against Mikey Garcia. “I thought Errol Spence was going to win the fight. I don’t think I underestimated Errol Spence. I thought too highly of Mikey. That’s what it is. The weight class wasn’t as issue [for Mikey]. People can’t say it was the weight class. Errol went out there and displayed the skills,” Hurd said.

Hurd is right about the skills being the difference between the two fighters. Spence spent most of the fight boxing Garcia from the outside, and getting the better of him on the inside as well with his talent. Garcia looked like a novice in there, who wasn’t ready to fight someone at the level of Spence. It’s too bad Mikey didn’t get exposed to better fighters before he fought Spence, because it wouldn’t have been such a shocker to see him get routed like that. The way Mikey fought, he would have badly lost to WBA/WBO lightweight champion Vasiliy Lomachenko if he’d fought before he mixed it with Spence. Mikey says he wants to return to the lightweight division. If he plans on fighting Lomachenko anytime soon, it would be a bad idea.

Spence, 29, had a little bit of a chip on his shoulder from all the negative comments that boxing fans were making about him going into his fight with Garcia. Spence’s critics felt that the only reason he was going to beat Garcia is because of his size and power. This annoyed Spence, because he knew that he was capable of a lot more than what the boxing fans thought he was. He wasn’t just a crude slugger, who uses his size and power to squash his opposition. So instead of looking to crush the weaker, less skilled Mikey Garcia, Spence decided to beat him with his boxing skills, which is what he did in front of a large crowd at AT&T Stadium in Arlington, Texas.

“A little bit,” Spence said when asked if he was bothered by not being able to knockout Mikey. “But the way I beat him, a lot of people didn’t expect me to beat him that way. They expected me to come forward and bully him and overpower him. I beat him in a systematic way and broke him down. I wasn’t really looking for the knockout. It wasn’t my game plan, but after watching the fight, I thought I could have went for a knockout a little bit more. He was good at surviving. He was 39-0, so he had a lot of experience. He knows how to block punches, and roll with punches and absorb punches. He knew what was coming. With me, my game plan was to let my skills show, and show the world I do have a high boxing IQ, and I can box, and I do have the ability to outsmart somebody instead of just using brute strength. My whole mentality throughout the fight was for me to coast through, even though I did throw 1,000 punches. It was more to out-punch him, and show people that I’m not just going to beat him like you think I’m going to beat him with brute strength. I’m going to beat him in different ways,” Spence said.

Spence is correct when he says Mikey was good at “surviving.” That’s what it looked like Mikey was doing out there. He was just looking to go the distance in the fight, and he accomplished that, but in doing so, he made himself look bad. Mikey should have gone all out to try and win the fight, but he clearly didn’t want to risk getting knocked out, so he played it safe and lost the fight by a decision.

When Spence made these comments about Pacquiao, he was still hopeful that the Filipino star would follow through after agreeing to face him next. But it’s not turned out that Pacquiao isn’t going to fight Spence. The Filipino star created a Twitter poll this week, leaving out Spence’s name entirely. The four fighters on Pacquiao’s four-fighter poll are as follows: Floyd Mayweather Jr., Keith Thurman, Danny Garcia and Shawn Porter.

“I’d put myself in the top five [pound-for-pounds],” Spence said

Hurd (23-0, 16 KOs) will be defending his IBF & WBA junior middleweight titles on May 11 against his #1 IBF mandatory challenger Julian ‘J-Rock’ Williams (26-1-1, 16 KOs) on Premier Boxing Champions on FOX and FOX Deportes at EagleBank Arena in Fairfax, Virginia. A win for Hurd, 28, over Williams will setup a fight between the winner of the Tony Harrison vs. Jermell Charlo II rematch.