This was an exciting fight between these two warriors. A rematch would be an excellent for the boxing fans.

Castano was the one pushing the fight, throwing more punches, and working harder to force the action. The judges were likely impressed with Lara’s late surge in the last four rounds in the 9th through the 12th. Castano lost some of the zip on his shots, and Lara was able to get into the fight.

In the 12th round, Lara landed the better shots against a tired looking Castano, who left himself open while going on the attack. It appeared that Castano had done more than enough to get the nod by the three judges based on his work in the first eight rounds of the fight, but they gave Lara a lot of the close rounds. That’s not surprising, because Lara is the more established fighter of the two having held the World Boxing Association junior middleweight title from 2014 to 2018. Never the less, Lara still winds up with nothing to show for his work tonight given that the fight was scored a draw.

Castano retains his WBA title, and he can either move on and fight someone else or have his management arrange a rematch. It’ll depend on the money obviously, and the other options that might float Castano’s way. Now that Castano has been seen by a lot of different fighters and their managers, it wouldn’t be surprising if he’s given an offer for an interesting fight. Castano against Jarrett Hurd would be a nice fight, as would a match against Jaime Munguia.

With the fight being scored a 12 round draw, Castano, 29, retains his WBA ‘regular’ 154 lb title. There’s no word whether the two will face each other in a rematch. Lara has options. He can always face IBF/WBA junior middleweight champion Jarrett Hurd in a rematch, although it’s a fight that he might fancy given how much punishment he took last April in losing to him by a 12 round split decision. There’s also WBO champion Jaime Munguia, but he’s promoted by Golden Boy Promotions. They might not want to let Munguia fight Lara. WBC champion Tony Harrison is also an option for Lara. 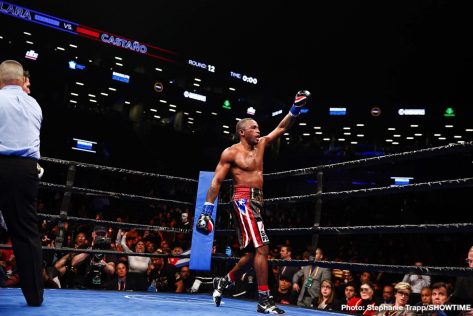 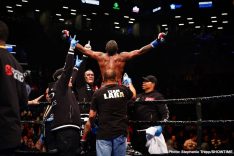