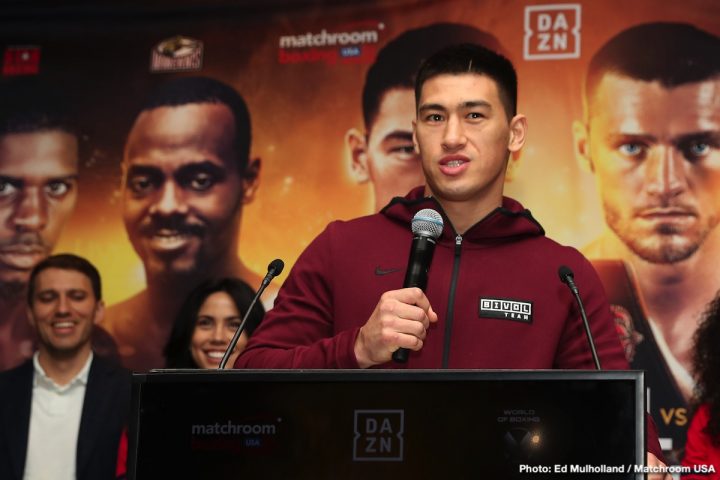 By Jim Dower: Dmitry Bivol (15-0, 11 KOs) says he’s interested in fighting Saul Canelo Alvarez and/or Andre Ward after he defends his WBA light heavyweight title this Saturday night against Joe Smith Jr. (24-2, 20 KOs) on DAZN. Bivol says willing to fight Canelo or Ward. He likes that Canelo is interested in moving up to 175 to challenge the champions in that weight class. But Bivol is equally willing to move down to 168 to challenge Canelo at that weight.

Canelo (51-1-2, 35 KOs) currently holds the WBA ‘regular’ super middleweight title that he won in beating Rocky Fielding (27-2, 15 KOs) by a third round knockout on December 15. Although there was speculation that Canelo would vacate his WBA 168 lb title immediately so that he could focus on unifying the 160 lb weight class, he still has held onto the title. It’s possible that Canelo will move back up in weight to super middleweight when an intriguing fight against someone like Chris Eubank Jr. is put together by his promoters at Golden Boy Promotions. Canelo’s venture into the 168 lb weight class was clearly a strategic one in which he and Golden Boy spotted a vulnerable champion in Rocky Fielding, who was easy for Alvarez to pick off for an easy belt. It would likely be a different story if Canelo attempted to do the same thing against Bivol, who hasn’t shown signs of being vulnerable and he’s definitely not an easy mark. If Canelo wanted to show some bravery to the boxing world, he’d agree to defend his WBA ‘regular’ super middleweight title against Bivol, who would come down in weight from 175 to make the fight happen.

“There was talk of Canelo moving up…Of course that is great when other great fighters move to our division – it is good for all light heavyweight boxers,” Bivol said. “I can make 168 for big fights. Not any fight but for big fights. It opens more opportunities for me that I can make 168.”

Canelo Alvarez and his promoters at Golden Boy haven’t been talking up a fight with Bivol. The only guy that has been talked about for Canelo is World Boxing Organization 175 lb champion Sergey Kovalev. That could be due to 35-year-old Kovalev being better known than Bivol or it could be a case of him being older and more vulnerable. Kovalev has lost three fights in the last three years in defeats to Ward and Eleider Alvarez. Kovalev has stamina problems that are well known, and he didn’t deal with the body shots that Ward was hitting him with in their two fights. Canelo is a very good body puncher, and that’s an area he would likely look to exploit if he fought Kovalev. Bivol is the ideal opponent for Canelo though, being that they’re both with DAZN. Kovalev is co-promoted by Top Rank Boxing and fights on ESPN. Putting together a fight between him and Canelo might be a problem when it comes to working out a deal that makes both platforms, DAZN and ESPN, happy.

Before he can look at potential fights with Canelo and Ward, Bivol needs to make sure he gets passed Joe Smith Jr. this Saturday night in their fight on DAZN at the Turning Stone Resort & Casino, in Verona, New York. If Bivol loses that fight, he’s going to be out of luck as far as those fights go.

“Why not? He was one of the best light heavyweights and I want to make great fights,” Bivol said when asked if he’d be interested in fighting Andre Ward if he comes out of retirement. “Right now I am in my best shape and my best years so I need to make the best fights. If Andre Ward wants to come and make a fight with me I will be glad to, of course.”

Ward might fancy the idea of facing Bivol, who isn’t an inside fighter like Artur Beterbiev, and would have problems if the fight were to take place at close range for the entire 12 round contest. It would be ugly affair if Ward chose to wrestle Bivol for the entire fight like did in many of the rounds against Sergey Kovalev. Bivol would be ready for that kind of fight if Ward chose to take it to the inside.

Former 168 and 175 lb world champion Andre Ward (32-0, 16 KOs) has retired for close to two years now, and it’s not likely that he would want to return to the ring for a less than monstrous fight against a big star. Bivol is just starting out, and it wouldn’t be a huge fight if he and Ward fought each other right now. To be certain, there would be a massive amount of fan interest from the hardcore boxing fans, but the casual fans wouldn’t get on board for a fight between Bivol and Ward. To interest fans in the U.S, Ward would need to challenge the likes of Canelo, Anthony Joshua or Deontay Wilder. Ward vs. Oleksander Usyk wouldn’t be a big deal to casual fans in the States, because the Ukrainian Olympic gold medalist isn’t well known yet. The World Boxing Super Series cruiserweight tournament, which Usyk won last year, wasn’t televised in the U.S.

“I want to fight any champion at 175 – from Brown to Badou Jack – but it is tough to pick an opponent because right now all I am thinking of is Saturday night,” Bivol said.

Bivol has a better chance of possibly fighting some of the other champions at 175, but still not a good chance. IBF champion Artur Beterbiev and WBC champion Oleksandr Gvozdk are both with Top Rank and fight on ESPN, as does Kovalev. Bivol is on an island with him competing on DAZN. It would be interesting for boxing fans to see Bivol fight the likes of Canelo, Ward, Beterbiev, Gvozdyk and Kovalev, but it’s just too likely to happen. Bivol is going to have to bide his time and hope that eventually he’ll be able to increase his popularity to the point where the bigger fights can happen for him. Right now, he’s too good, and he’s fighting on a different platform than the other champions.