Danny Garcia vs. Adrian Granados on April 20 in Carson, CA 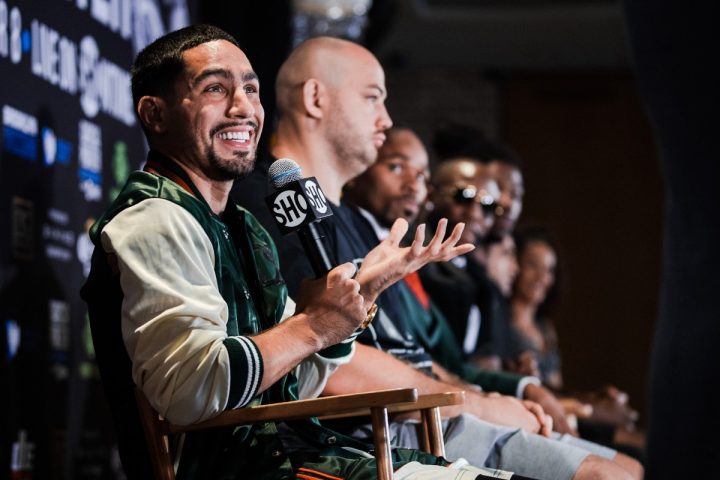 By Dan Ambrose: Danny Garcia will try to breathe life into his sagging career on April 20 when he faces #10 WBC welterweight contender Adrian Granados (20-6-2, 14 KOs) in a must win fight on Premier Boxing Champions on FOX and FOX Deportes at the Dignity Health Sports Park in Carson, California. The televised card kicks off at 8:00 p.m ET/5:00 p.m. PT.

Garcia, 30, has lost two out of his last three fights in defeats to Keith ‘One Time’ Thurman and Shawn Porter. Garcia’s only win in the last two years was against Brandon ‘Bam Bam’ Rios, who is nowhere near the same fighter that he once was.

The management for Danny Garcia might have underestimated how anger there would be from boxing fans at the news of him facing Granados. Judging by the reaction from fans on social media at today’s announcement of the Garcia vs. Granados fight, they seem to really hate it. It’s easy to understand why some people would be upset at hearing that Garcia if facing Granados. They want Garcia to take on the good contenders in the weight class like Josh Kelly, Jessie Vargas or Josesito Lopez. Grandos has recent losses to Shawn Porter and Adrien Broner that the boxing fans haven’t forgotten about. Some fans are calling Garcia vs. Granados as another example of cherry picking for Danny. With Garcia having lost recently to Porter, it’s understandable why he would be looking to take on a semi-soft opponent, although Granados is far from being an easy fight. He’s a good fighter, but not a big puncher. It’s a fight that Garcia SHOULD win, but you never know. He’s not polished enough at 147 for him to be a solid lock favorite against a guy that comes to fight like Granados. This is a match that Grandos could win on effort alone by wanting it more and putting pressure on Garcia until he boils over on the side of the road. Past his prime Brandon Rios had Garcia’s face badly marked up in giving him a lot of problems last year. Garcia eventually stopped Rios in the 9th round, but it was far from an easy fight for him.

Garcia vs. Granados is scheduled for 12 rounds at welterweight. Garcia needs a victory over Granados, 29, to stay in position to challenge for a world title against one of the world champions. Thurman, Porter and Manny Pacquiao are the likely champions that Danny will be gunning for if he beats Granados. IBF champion Errol Spence Jr. might not be of interest for Garcia, as he’s never shown much enthusiast in facing the Texas born talent.

Staging the Garcia-Granados fight on the same night as the Top Rank Boxing card on ESPN pay-per-view between WBO welterweight champion Terence Crawford and Amir ‘King’ Khan could result in both cards being hurt. Since Garcia vs. Granados fight is being shown on free television on FOX and FOX Deports, it might not be hurt nearly as much as the Crawford-Khan fight, which is fight card that boxing fans will need to pay to see. This kind of counter programming has been going on a lot over the years, but it seems like it’s speeding up now with the heavy competition between the PBC, DAZN and ESPN cards.

Although Danny Garcia (34-2, 20 KOs) only been beaten twice in his 12-year pro career, he’s someone that is viewed as having seen better days. It’s unclear what kind of fighter he’s going to be at this point. Shawn Porter soundly beat Garcia by a 12 round unanimous decision last September in winning by the scores 116-112, 115-113 and 115-113. The most accurate score of those three was the 116-112 score. Garcia, and it wasn’t that close. Since Porter is seen as the weakest of the champions at 147 in the eyes of a lot of boxing fans, it would seem that Garcia doesn’t spot as a world champion right now, nor does he have a hope of winning another world title. Unless Pacquiao retires or ages to the point where he’s not the fighter he is today, Garcia might be stuck as a contender for a long time to come. Garcia’s probably not going to beat Porter, Thurman, Crawford or Spence.

“I cannot wait to get back in the ring and put on the Danny Garcia show once again,” said Garcia in talking in the third person. “Granados was talking a big game when we first announced the fight and I plan on proving him wrong on April 20. The Southern California fans have always treated me right and I’m excited to give them a great fight.”

Granados might be a step too far for Garcia at this point in his career. Garcia was a good fighter at 140, but he’s not the same guy at 147. This isn’t his weight class. Even at 140, Garcia didn’t fight a lot of the guys that were there for him to face like Terence Crawford and Regis Prograis. Garcia moved up in weight just in time to avoid some losses to those fighters, and other guys like Josh Taylor, Jose Ramirez, Kiryl Relikh and Ivan Baranchyk.

“This is a huge fight for me and definitely one of the most important in my career,” said Granados. “I’m looking to dominate, look impressive and control the fight.

If Granados wants to win this fight, he’s going to have to do a little bit more than usual to get the ‘W.’ Granados is coming into this fight as the clear B-side fighter, and that means that if any of the rounds or close, it’s quite possible that they’ll go to Garcia. Granados is no stranger to controversy. He found himself on the receiving end of a questionable 10 round against Adrien Broner two years ago in his hometown of Cincinatti, Ohio. Many boxing fans saw Granados as doing more than enough to deserve the win, but it wasn’t to be. Now we could see the same thing with Garcia being the one that has his hand raised at the expense of Granados. The way that Granados fought Porter last year in a losing effort, you have to say that the Garcia-Granados fight is a toss-up. Garcia isn’t that great of a welterweight, and he’s now fighting a guy that is pretty evenly matched in Granados. Still, it’s unlikely that Granados will be able to pull off the upset in this fight unless he really gives Garcia full beat down from round one to twelve.

In the undercard, heavyweight Andy Ruiz Jr. faces 36-year-old journeyman Alexander Dimitrenko in a fight scheduled for 10 rounds in the chief support, and undefeated Brandon Figueroa will be facing former world title challenger Yonfrez Parejo. The undercard is lacking a big. The 6’7″ Dimitrenko was a factor in the heavyweight division a decade ago back in 2007, but he’s well past it now at 36. If Ruiz Jr. puts it on Dimitrenko, he could score a knockout. If he fights at a slow pace, then Dimitrenko will make it tough for him.