Dmitry Bivol vs. Joe Smith Jr. – How & Where To Watch 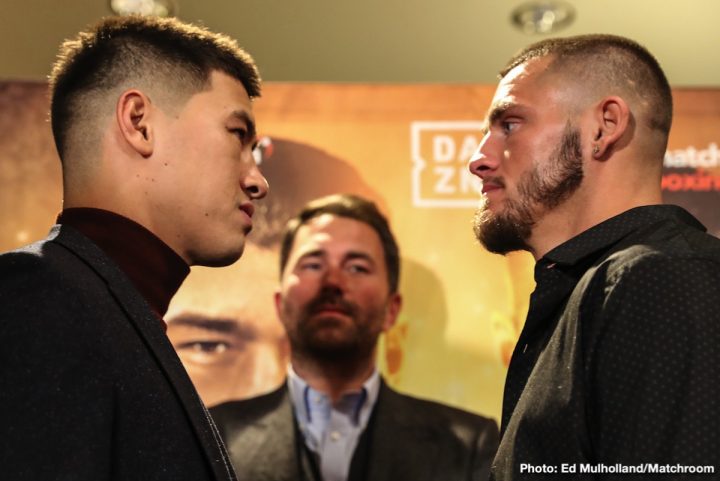 Unfortunately, this Matchroom Boxing USA card for Saturday is a mixed bag with the top fights looking like mismatches. Bivol vs. Smith Jr. promises to be a one-sided schooling by the highly technical Bivol against a crude slugger in Smith Jr. The chief support between WBO 140 lb champion Maurice Hooker and his little known opponent Mikkel LesPierre has mismatch written all over it. LesPierre looks totally inexperienced with a resume filled with no name opponents. Matchroom promoter Eddie Hearn arguably could have done a better job of selecting a quality opponent for Hooker to face instead of digging up a guy that looks he’s not ready for this style of a fight. But who knows? Perhaps this card could be a pleasant surprise with the B-side opponents making it competitive. If these turn out to be one-sided mismatches, there’s going to be some upset boxing fans, who expect more for their money. The real quality on this card could be the undercard fight between Callum Johnson and Sean Monaghan. That’s going to be a fun fight while it lasts. Johnson has major power, and is coming off of a war with IBF light heavyweight champion Artur Beterbiev. Johnson knocked Beterbiev down in that fight, and had him on the brink of being stopped. Johnson let Beterbiev off the hook, and wound up being knocked out in the fourth.

Smith Jr. (24-2, 20 KOs) is going to have his hands full trying to seal with the boxing skills of Bivol. The 29-year-old Smith Jr. is a good fighter with punching power, but he’s been beaten before when he’s stepped it up against Sullivan Barrera. Smith Jr. beat 50-year-old Bernard Hopkins in December 2016 by an eighth round stoppage, but that was against an old B-Hop, fell out of the ring, causing the fight to be stopped. Smith Jr. is going to have to try and get to Bivol for him to have a chance of winning this fight. Once Bivol starts boxing Smith, the fight is going to follow a logical patter with the Russian fighter heading towards an easy 12 round decision. It’ll still be an interesting fight to watch to see if Smith Jr. can hurt Bivol with anything big like he did with his stoppage wins over Hopkins and Andrzej Fonfara.

You can’t really count Hopkins as being a significant win for Smith Jr. due to his advanced age at the time of the fight. The last real quality win for Smith Jr. was his first round knockout victory over Fonfara in June 2016. That’s the only real solid victory over a prime fighter during Smith’s career, and it leaves a lot of question about whether he’s someone that is going to be able to compete with Bivol in this fight. This fight has mismatch written all over it. Smith Jr. is guy that has built his reputation on defeating Fonfara and 50-year-old Hopkins. Smith Jr. is very likely going to fall apart against Bivol like he did in his 10 round unanimous loss to Sullivan Barrera in July 2017.

This will be the 28-year-old Bivol’s fourth title defense of his WBA belt that he won in 2017. Bivol (15-0, 11 KOs) has his eyes on fighting the other champions at 175, and he’s also interested in dropping down to 168 to face WBA ‘regular’ super middleweight champion Saul Canelo Alvarez in a fight in that weight class if he’s willing to take the risk. That would be an ideal match-up for the talented Russian fighter if the Golden Boy promoted Canelo agreed to fight him. Canelo is interested in fighting WBO 175 lb champion Sergey Kovalev, is 35-years-old now, and not the guy that he once was. Unlike Kovalev, Bivol is still in his prime, and is raring to go to face Canelo if he agrees to take the fight with him.

“This is a huge opportunity for me and I am going to take advantage of it,” Smith Jr. said about his fight with Bivol. “I’ve worked very hard, trained very hard. I’ll give it everything I have and come March 9th, hopefully take the title home.”

The lanky 5’11” Hooker will be making his second defense of his WBO belt. Hooker recently defeated the talented Top Rank promoted fighter Alex Saucedo (28-1, 18 KOs) by a seventh round knockout last November in an exciting fight from start to finish. That was a big win for Hooker, 29, who used his size and reach advantage to beat Saucedo.

Although the 33-year-old LesPierre is an unbeaten fighter, he’s not faced anyone talented enough to identify whether he’s for real or not. LesPierre, who comes from Trinidad, is a seven-year pro, but he’s fought absolutely no one of note during his career. The way that LesPierre has been matched by his promoters, it sends out a red flag that he might not that talented a fighter. In LesPierre’s last six fights, he’ beaten these fighters: Wilton Montero (8-8-1), Gustavo David Vittori (22-4-1, 12), Noel Murphy, Mario Beltre, Kevin Santos and Jerome Rodriguez. Those are not recognizable names.

Also on this Saturday’s card on DAZN are the following fights: