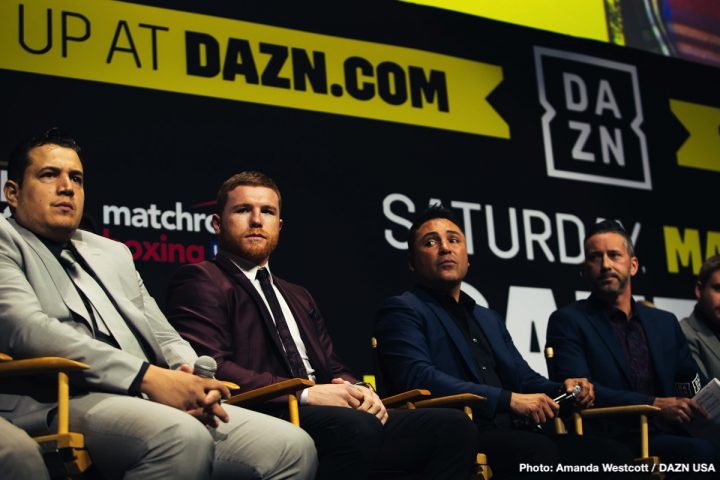 By Sean Jones: Oscar De La Hoya says his young star Saul Canelo Alvarez has “endless possibilities” for big fights after he gets done with his next one against Daniel Jacobs on May 4, and several of the options are potential fights against Gennady Golovkin, Andre Ward or Floyd Mayweather Jr.

Although De La Hoya insists that Canelo’s possibilities for big fights are “endless,” the reality is they’re not endless, and he’s going to have a lot of work to do to make sure the Golden Boy star makes it to the end of his $365 million contract with DAZN.

The platform is paying a lot of money for Canelo to be involved in huge fights. If Canelo runs out of interesting opposition, then it’s unclear what happens with that that contract. One way for Canelo to keep bringing in subscribers to DAZN is for him to be opened minded and flexible about the opposition he faces. That’s where Oscar comes in. If he can get Mayweather and Ward to come out of retirement to face Canelo, those would be huge fights that would very winnable for him.

The fight that Oscar De La Hoya of Golden Boy Promotions wants is a rematch between Canelo (51-1-2, 35 KOs) and Mayweather Jr. (50-0, 27 KOs), but if that fight can’t get made, De La Hoya says there’s other great fights out there for Alvarez against former two division world champion Andre Ward (32-0, 16 KOs) or trilogy match against former middleweight champion Golovkin (38-1-1, 34 KOs) for September.

“Andre Ward retired at 168 or 175?” De La Hoya asked. “Imagine Canelo calling out Andre Ward. Don’t you think Andre Ward would come back for a Canelo fight? So the possibilities are endless for Canelo. That’s the beauty of him. He can fight at 160, 168, and to me it’s crazy, but he can fight at 175. There’s many options out there,” De La Hoya said.

The way that Ward looked in his last two fights against Sergey Kovalev, Canelo would be a big favorite to beat him. Against Kovalev, it was apparent that Ward’s legs were gone, and he was resigned to holding, wrestling, and throwing short punches from the inside. That style would not work well for Ward against a schooled inside fighter like Canelo. In fact, it could be a disaster for Ward if he attempted to use that same approach to beating Canelo. Two years of inactivity will make it even more difficult for Ward to match up with Canelo. This would be a disaster for Ward, and he likely won’t take the fight against Alvarez even if De La Hoya calls him out.

Canelo (51-1-2, 35 KOs) will have his WBA/WBC middleweight titles with him when he fights IBF champion Daniel Jacobs (35-2, 29 KOs) on May 4 on DAZN at the T-Mobile Arena in Las Vegas, Nevada. The winner of this fight will walk away with the IBF, WBA and WBC middleweight belts. From there, we could see a rematch if Jacobs wins or Canelo moving on to face either Gennady Golovkin or Demetrius Andrade.