Canelo admits he could lose to Jacobs 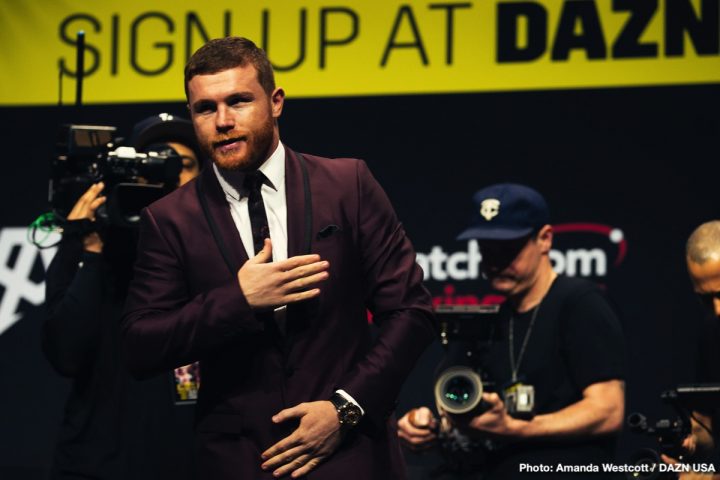 By Dan Ambrose: Saul Canelo Alvarez is playing it humble ahead of his unification fight against IBF middleweight Danny Jacobs (35-2, 29 KOs) on May 4, admitting that he could wind up losing the fight on DAZN at the T-Mobile Arena in Las Vegas, Nevada. At the final stop of their three-city press tour in Los Angeles, California, Canelo (51-1-2, 35 KOs) says he could come up short against Jacobs, but he wants to give his boxing fans a great finish to the fight.

If Canelo, 28, can fight the way he did in his last contest against Rocky Fielding in December of last year, he’ll make a lot of fans happy. The fight was like Canelo was starting in from the 12th round from his previous contest against Gennady Golovkin last September.

“I may lose, but my heart is a winning heart and I want to give the fans a spectacular finish and I’m going to put up a good fight,”, Canelo said in sounding very humble.

This new humble approach by Canelo in talking up his fights seems to be departure from the confident way that he has spoken in the past when giving his thoughts about his fights. You have to wonder if Canelo wants to make his boxing fans see him in a different light than some of them do. If Canelo can remake his image into a modest fighter, who tries his best in his fights, he could be more liked by the boxing fans that are sitting on the fence.

Canelo seems to have adopted the modest approach that Golovkin used to build up a huge fan base. The boxing public has always liked the way that GGG was seemingly unaware of his own talent. I could be also that Jacobs’ humble style of talking about his own talent is starting to rub off on Canelo, giving him temporarily a new way of talking up his fights. We’ll likely see the old, confident, and some might say slightly cocky Canelo return in the near future once he faces an opponent that is talking boldly about their chances

I want people to experience a good fight when they come watch my fights,” Canelo said.

If Canelo wants to give the fans a great experience in watching his fights, he needs to stay off the ropes, and come at his opponents the way he did in his last fight against former middleweight champion Gennady Golovkin last September. That was a good performance by Canelo, who fought like he wasn’t afraid of getting clipped by GGG. Canelo’s decision to march straight into the teeth of GGG’s offense almost cost him the fight in rounds 10 and 11, when he was hurt by huge uppercuts from Golovkin.

Somehow, Canelo made it through those rounds, and was able to do just enough in the 12th to edge Gennady by a 12 round majority decision. The fight was far from the dominating performance that Canelo’s boxing now speak of it, as in remembering it. In hearing Canelo’s fans talk of the fight, one would believe that was a total schooling by him. In looking it today before writing this article, the fight was essentially a draw, unlike the first Canelo-Golovkin contest, which appeared to be a clear win for GGG. The rematch looked like a draw. Despite Canelo’s good early start in the rematch, neither fighter established that they were the winner. Canelo fell apart in the second half of the fight, and gave away most of the rounds, although not in the eyes of two of the judges that were assigned to the fight.

“I know the odds are stacked against me and Canelo’s resume speaks for itself, but he’s never faced a tall, fast and big guy all at once and that’s what I’m going to give him,” Jacobs said. “We’re going to give you what you’re looking for and the fans going to get a great fight come May 4.”

Jacobs’ emphasis on him being fast gives the impression that he’s going to try and use his feet to get away from Canelo. That’s not a good idea. Jacobs should be thinking more about going after Canelo with his size, speed and power. It looked strange in Jacobs’ last fight when he was being chased around the ring by the smaller 5’9″ Sergiy Derevyanchenko last October. The image of the bigger, stronger and faster Jacobs running from the shorter, slower, smaller and weaker Derevyanchenko, it looked bad. That fight could have been a much easier one for Jacobs had he taken the battle to Derevyanchenko from start to finish instead of treating him like he was a knockout artist. Jacobs made it a lot tougher match than it should have been for him.

In his recent interviews with the boxing media in the build up to his fight with Alvarez on May 4, Jacobs repeatedly brings up how fast he is on his feet, and Canelo isn’t going to be able to walk him down the way he did with GGG. What Jacobs is saying basically is he’s going to get on his bike from the opening bell, and peddle away from Alvarez instead of meeting him head on, and giving the boxing fans a great show. The way that Jacobs talks, he’s got his mind made up already that he’s going to play keep away from Canelo for the entire match. That’s not to say that Jacobs won’t look to land occasional shots, because it goes without saying that he’s going to try and hit Canelo with some shots. But Jacobs isn’t going to get the decision on the scorecards if he’s going to fleeing from the 5’8″ Canelo the entire 12 rounds. It’s going to look really bad for Jacobs to be trying to get away from someone so much smaller than him, who will be looking to impress the judges each round. Jacobs’ trainer Andre Rozier needs to give him a better game plan for him to just run from Canelo from the word go on May 4. That’s why Jacobs lost to GGG. He ran from him most of the fight, and fell so far behind in the first six rounds, that there was no way he could make up for it in the second half of the contest.

“Jacobs is the best middleweight walking on this planet, his capabilities, skillset and gentleman ship will be what wins the fight on May 4,” Rozier said.

Obviously, Jacobs isn’t the best middleweight on the plant, because he was already beaten by Golovkin in 2017. At this point, you can argue that Jacobs is possibly the #3 or #4 middleweight division behind Golovkin, Canelo and Jermall Charlo in that order. This writer doesn’t view Canelo as the best, because he should have lost the first fight with Golovkin, and the second, if scored the way many boxing fans saw it, should have been a win for Golovkin or a draw. Jermall looks like a better fighter than Jacobs. Charlo fights with more courage, and doesn’t waste energy from his opponents the way Jacobs does. If Charlo were to lose Canelo, it wouldn’t be because he was fighting timidly. Jermall would out on his shield against Canelo, and it would arguably be a much better fight than the one we’ll be seeing on May 4. It’s up to Jacobs whether he wants to come to fight against Canelo or run from him like he did against Golovkin, Dmitry Pirog and Derevanchenko.

Boxing » Canelo Alvarez » Canelo admits he could lose to Jacobs