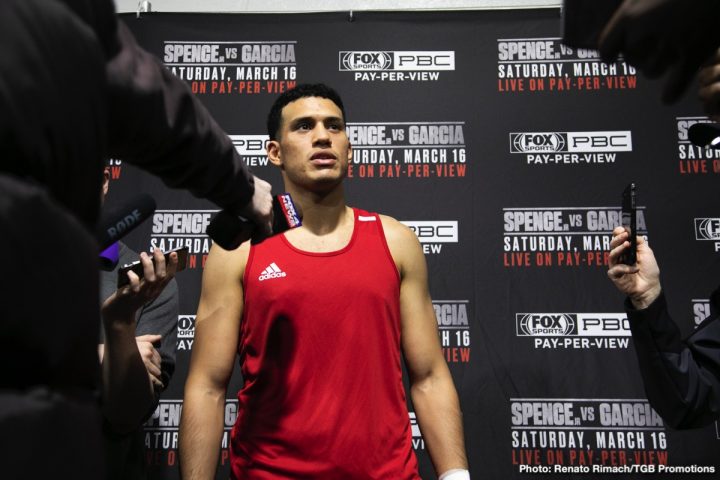 By Jim Dower: Former WBC super middleweight champion David Benavidez will be returning to the ring this Saturday night against J’Leon Love in a 10 round fight in the co-feature bout on the Errol Spence Jr. vs. Mikey Garcia card on Premier Boxing Champions on Fox Sports pay-per-view at the AT&T Stadium in Arlington, Texas. The fight card begins at 9:00 p.m. ET/ 6:00 p.m. PT.

Benavidez is targeting IBF super middleweight champion Caleb Plant (18-0, 10 KOs) this year. If Benavidez can win back his WBA 168 lb title, then a unification match against Plant would be the next logical move.

Benavidez (20-0, 17 KOs) will be fighting for the first time in 13 months since his 12 round unanimous decision win over Ronald Gavril in their rematch on February 17 last year. Benavidez tested positive for a cocaine last September for a VADA conducted test that took place in August. Benavidez was suspended and stripped of his WBC title. The fight with the 31-year-old Love is meant as a tune-up level match for the 22-year-old Benavidez. If he wins this fight, then he hopes to go after his old WBC title against WBC champion Anthony Dirrell.

“I would love to fight Caleb Plant,” David Benavidez said. “He’s a great fighter, but when he fought [Jose] Uzcategui, he couldn’t keep his face clean. He looked like he was in there with four guys. So if Uzcatgui could do that to him, I’m going to try and take the guy apart, and I’m looking forward to it.”

Before Benavidez, 22, can think about fighting Plant, he’s got to get passed Love (24-2-1, 13 KOs) this Saturday. If there’s ring rust there, Love is someone that can take full advantage of it if he lasts long enough. Benavidez in his first fight with Ronald Gavril in September 2017, he ran out of gas in the second half of the fight and struggled. One of the problems Benavidez has, besides his inexperience, is his size. He’s REALLY big for the super middleweight division, and he probably should have moved up in weight to light heavyweight two years ago, but he resisted the move for obvious reasons. Benavidez is like a big fish in a small pond at 168. There are few big punchers in the super middleweight division, and Benavidez and Callum Smith stand out among the crowd. Once Benavidez moves up to light heavyweight, he’ll be just one of many hard punchers in that weight class, no better or worse than any of the guys. It’s debatable whether Benavidez will ever win a world title at light heavyweight, especially with guys like Dmitry Bivol around.

“He hasn’t been able to keep his nose clean,” Caleb Plant said about Benavidez. “He’s got to handle his stuff. Hopefully one day if he can keep his act together, maybe we can bring you guys a fight,” Plant said.

Plant didn’t sound like he was too excited about fighting Benavidez during the interview. Plant seemed to make it a point to hint at Benavidez’s positive test for cocaine, and then he mentioned that he and Benavidez can fight “one day”, which is a huge hint that there won’t be a fight between them soon.

If Benavidez could get a fight against Plant, 26, he’d likely be a big favorite to defeat him, because Caleb isn’t a big puncher. Although Plant beat Jose Uzcategui by a 12 round unanimous decision last January to win the IBF title, he took a lot of punishment in the face, and didn’t look that great. The way Plant looked, he would be very vulnerable against any of the good super middleweights in the division, especially someone like Benavidez, Callum Smith, Jesse Hart, Saul Canelo Alvarez, Billy Joe Saunders, Gilberto Ramirez or Dmitry Bivol, if he chooses to move down in weight from 175. There’s a goo chance that all those guys beat Plant. If Benavidez can get to Plant first, then he can take his IBF title.

“It’s a blessing being here in the co-feature,” Benavidez said. “I’m excited and I’m ready to show it off on Saturday. I’m ready to go in there and get my spot, which belongs to me. I know I’m the best super middleweight, and now it’s time for me to prove it. I haven’t been there in a year, and it’s time for me to get my groove back and start off slow. When I see the opportunity, I’m going to take it. I’m going to capitalize on it. I’ve seen a lot of holes in his game,” Benavidez said about Love. “When he fought Kid Chocolate [Peter Quillin]. There’s a lot of things we can take advantage of. We’re ready to take it to him on Saturday. I’m been working with Dmitry Bivol. He’s a great champion. I feel blessed to have the opportunity to work with him. I’m just ready. I’m not looking past J’Leon Love. He’s still a dangerous fighter. So I got to get through him, but if I can get two more fights before the year’s end, I’m looking to get my WBC title back. That’s what I want. I’m going to go back in there and get it,” Benavidez said.

Of course, Benavidez sees holes in Love’s game. The guy has fallen apart in the two times he stepped it up against talented fighters in Peter Quillin (34-1-1, 23 KOs) and Rogelio ‘Porky’ Medina in the past. Love is coming off of a one-sided 10 round unanimous decision loss to the 35-year-old Quillin last August. This wasn’t even a prime Quillin, and yet he easily defeated Love. Quillin has fought just twice in the last four years since being stopped by Danny Jacobs in 2015. The fact that Love was easily beaten by a ring rusty Quillin says all you need to know about Love. He’s an opponent for Benavidez and nothing more. He’s going to give him some rounds, and let hi come back slowly without having to take any chances by fighting a good fighter and potentially lose the fight.