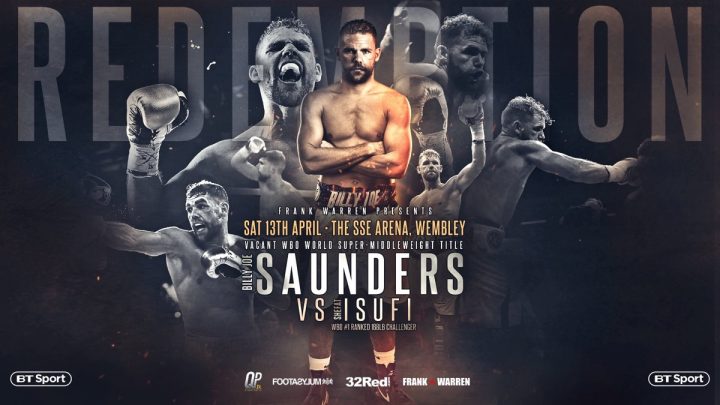 By Trevor McIntyre: Billy Joe Saunders’ next fight against #1 WBO super middleweight contender Shefat Isufi, which was previously scheduled for April 13, has reportedly been postponed until May. Former WBO middleweight champion Saunders (27-0, 13 KOs) is going through a trainer change, and will have a new date and venue, according to promoter Frank Warren.

When the Saunders vs. Isufi fight was originally scheduled for April 13, it was supposed to take place for the vacant World Boxing Organization super middleweight title at the Wembley Arena in London, UK. Gilberto ‘Zurdo’ Ramirez (39-0, 25 KOs) stunned the fans when made it clear that he wasn’t vacating his WBO 168 lb title, even though he was going up in weight to fight at light heavyweight against Tommy Karpency.

It’s still possible that Ramirez will vacate his WBO title, but that won’t be decided until after he faces Karpency on April 12 next month on the undercard of Vasyl Lomachenko vs. Anthony Crolla card at the Staples Center in Los Angeles, California. The WBO could make things easier if they chose to strip Ramirez of his title due to him going up in weight to take an experimental fight against Karpency at 175. By Ramirez, 27, taking a fight with Karpency, he can get his feet partially wet at light heavyweight to see how well he holds up without giving up his WBO 168 lb title.

If Ramirez struggles to win against the southpaw Karpency, then he can move back down and resume defending his WBO super middleweight title as he’s been doing for the last three years since winning the strap in 2016. Karpency isn’t someone that has the talent to give Ramirez the ability to properly gauge how well he’ll do against the better fighters in the 175 lb division. Ramirez should have picked a viable contender like Sullivan Barrera, Callum Johnson, Marcus Browne or Joe Smith Jr. to get a good feel for the light heavyweight division.

Fighting Karpency won’t tell Ramirez anything. He already knows he can beat that level of opponent. If Ramirez struggles in beating Karpency, then he’ll remain at super middleweight the remainder of his career, which you can argue he probably will anyway. Even if Ramirez gives up his WBO title and moves up to 175, he’ll almost surely be back at 168 once he loses for the first time.

Here’s the news release from Warren on the Saunders vs. Isufi situation:

“Queensberry Promotions are pleased to confirm that Billy Joe Saunders’ next fight will be against Shefat Isufi at Super Middleweight…With the widely reported changes in Billy Joe Saunders’ training situation and the current status of the WBO World Super Middleweight Title, this fight will not take place on April 13th at the SSE Arena, Wembley as was previously announced. The fight will be moved to a new date in May at a venue to be confirmed at a later date.”

If Ramirez wins his fight with Karpency and looks good, then he’ll likely give up his WBO super middleweight title. Saundera and Shefat Isufi would then square off for the WBO 168 lb title in May at a still to be determined venue and date.

Saunders is no longer trained by Dominic Ingle, and now will be searching for a new trainer to get him ready for the Shefat Isufi fight. There’s talk that it could be Ben Davison, who also trainers former heavyweight champion Tyson Fury. Saunders and Fury are good buddies.

As the WBO middleweight champion, Saunders has been more or less a part time fighter since winning the strap in 2015 in beating Andy Lee. The years have gone by with Saunders often being injured, and never facing anyone dangerous. Saunders sat on his WBO 160 lb title for a year before making his first defense against Artur Akavov in December 2016, and won a controversial 12 round decision.

Many boxing fans thought Saunders deserved to lose the fight to Akavov, but he came out on top in the match, which took place in the UK in Scotland. In Saunders’ only two other defenses, he beat Willie Monroe Jr. and David Lemieux. Injuries prevented Saunders from making title defenses against Max Bursak and Martin Murray.

When Saunders was finally about to face his first high quality challenger in Demetrius Andrade last October, he tested positive for a banned substance during a VADA test and wound up vacating his World Boxing Organization middleweight title after the Massachusetts State Athletic Commission failed to give him a boxing license to fight in the state.

The high point for Saunders during his time as the WBO champion was his one-sided 12 round unanimous decision win over former IBF lb champion David Lemieux in December 2017. In hindsight, it might have been a blessing that Saunders didn’t fight the unbeaten Andrade, as he might have lost to him, and then his popularity, such as it is, would have taken a hit.

Saunders has shown interest in fighting Saul Canelo Alvarez and Gennady Golovkin, but neither of those guys ever fought him. Saunders had the WBO 160 lb title that would have been the perfect lure to get Canelo or GGG to fight him, but the matches were never made. To say it was a missed opportunity for Saunders is putting it lightly.

“There will be an announcement on an exciting new London show for April featuring some of our best up and coming local talent this week and this will be followed up next with details on where and when Saunders v Isufi takes place.”

Saunders fought last December in ballooning up to cruiserweight to defeat light heavyweight journeyman Charles Adamu by a fourth round stoppage in Manchester, England. Saunders weighed in for that fight at a whopping 178 lbs. That’s not a bad weight for Saunders if he decides to stay at super middleweight, but he likely won’t remain there if Ramirez chooses to hold onto his WBO 168 lb title.

By moving up in weight to super middleweight, Saunders can potentially extend his career a little longer if he can get his hands on the WBO super middleweight title. The 168 lb weight class is a weak one, and Saunders would have a better chance of getting good money fights against the likes of Chris Eubank Jr. and Callum Smith than he would if he stays at middleweight, and ends up losing to Andrade and forgotten about.