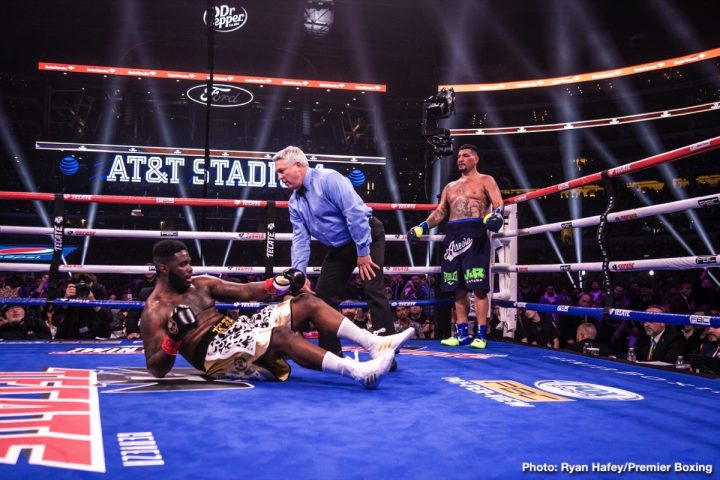 By Mike Smith: Former two time heavyweight world title challenger Chris Arreola (38-5-1, 33 KOs) made easy work of previously unbeaten little known Jean Pierre Augustin (17-1-1, 12 KOs) in stopping him in the third round of a scheduled 10 round fight on Saturday night on Fox Sports pay-per-view at AT&T Stadium in Arlington, Texas.

Arreola, 38, dropped Augustin with a big left hook to the head in the third round. After Augustin, 31, got back to his feet, Arreola drove him to the ropes and unloaded on him with a small flurry of ramrod shots to the head one after another until the referee Neal Young stopped in and waived off the contest. The official time of the stoppage was at 2:03 of round three.

It was a good performance for Arreola, who won his second fight of his comeback. Arreola was out of boxing from 2016 to 2018. He returned last year and stopped Maurenzo Smith in the sixth round last December. Arreola’s punching power is as good as it ever was. He’s gotten older. He’s not the same guy that lost to former World Boxing Council heavyweight champion Vitali Klitschko by a 10th round stoppage a decade ago in 2009, but he’s still a big puncher, and dangerous for anyone in the heavyweight division if he lands his big shots.

In round one, Arreola came out looking to land a big knockout shot. He was swinging wildly, and missing Augustin. Arreola walked into a couple of hard jabs from Augustin, but it didn’t slow him up a bit. Near the end of the round, Arreola connected with a left hook that seemed to stagger Augustin. The shot made it clear that this fight was not going to last long. Augustin didn’t possess the punch resistance of the defense to be in the ring with a puncher like Arreola. 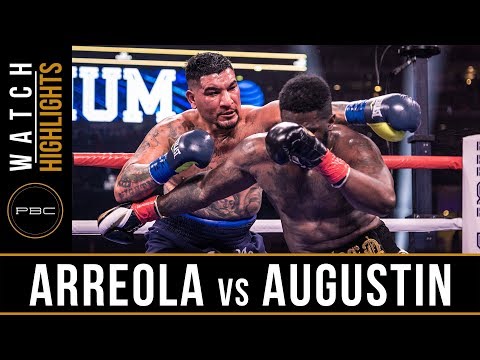 In the second round, Augustin landed some nice shots that got the attention of Arreola. It didn’t slow Arreola up though. He kept plodding forward swinging with straight right hands and left hooks, looking to take Augustin out. The round was close.

Arreola hurt Augustin at the start of round three after hitting him with a stiff jab that shock him badly. Arreola stayed calm, and moments later, he connected with a clean left hook that sent Augustin down. While he was starting to go down, Arreola connected with another nice hook for good measure to hurry him downward. A badly hurt Augustin got back to his feet, and was immediately trapped against the ropes by Arreola. Augustin tried to cover up, but he ate a beautiful left-right combination from Arreola that had him looking out on his feet. The referee then stepped in and stopped the fight.

The win for Arreola now puts him back in the title picture. He’s got a ways to go, but he’s a viable option for one of the heavyweight world champions due to his name recognition with the casual and hardcore boxing fans. A title shot against Joshua would be ideal for Arreola, as there’s a lot of money he can make fighting him.

As for Arreola’s next fight, it would be nice to see him fight a third match against Bermane Stiverne. Arreola lost twice to Stiverne four years ago, but a lot has changed since then. Stiverne has gotten older, and isn’t the same fighter he was back then. Arreola that fought tonight would have a very good chance of beating the Stiverne we saw recently getting stopped by Joe Joyce.

Corbin had a point deducted earlier in the fight in the fourth for a low blow.

In the 5th, Corbin lost another point for a low blow. In the sixth, Corbin once again had a point deducted for a low blow. It was pretty clear after the third point deduction that Corbin was skating on thin ice. If he didn’t stop throwing shots to the midsection altogether, he was going to end up getting disqualified. In the eighth round the referee finally had seen enough, and halted the fight after Corbin landed yet another low blow.

All in all, the 6’5″ Martin looked good against a guy that wasn’t in the same league as him. Martin is better than this. He needs to be facing quality opposition rather than wasting time on prospects with limited talent, and who don’t belong fighting someone of his class level.

The southpaw Martin lost his International Boxing Federation heavyweight title to Anthony Joshua in April 2016. Since that defeat, Martin has won three out of his last four fights. Going into tonight’s fight with Corbin, Martin had lost his previous contest against the hard hitting Adam Kownacki last September by a close 10 round decision. Martin got hit too much by Kownacki for him to get the decision. 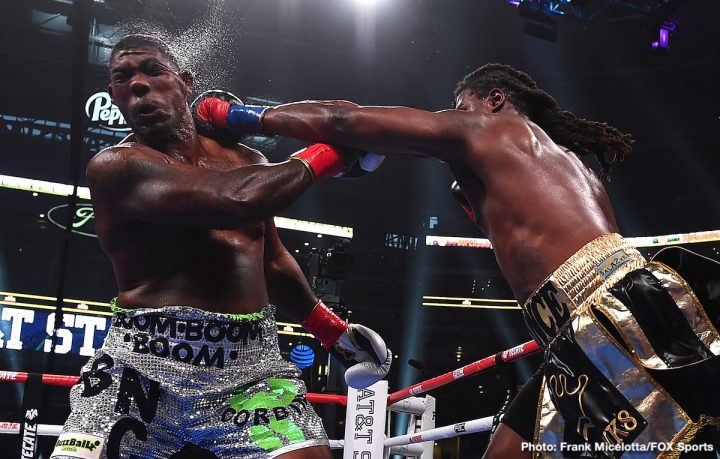 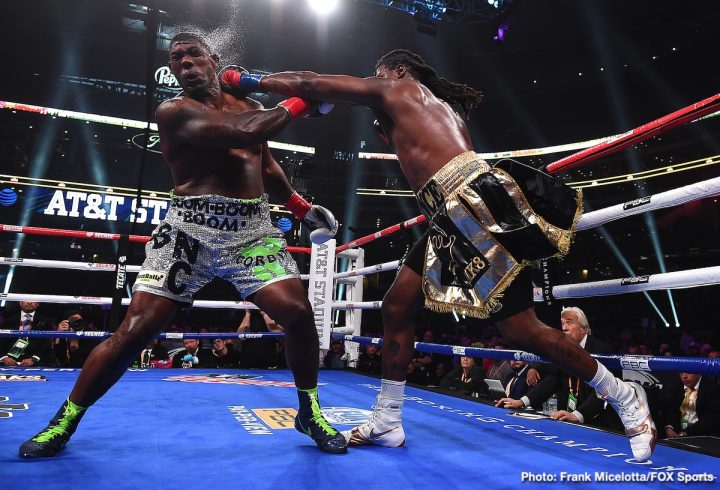 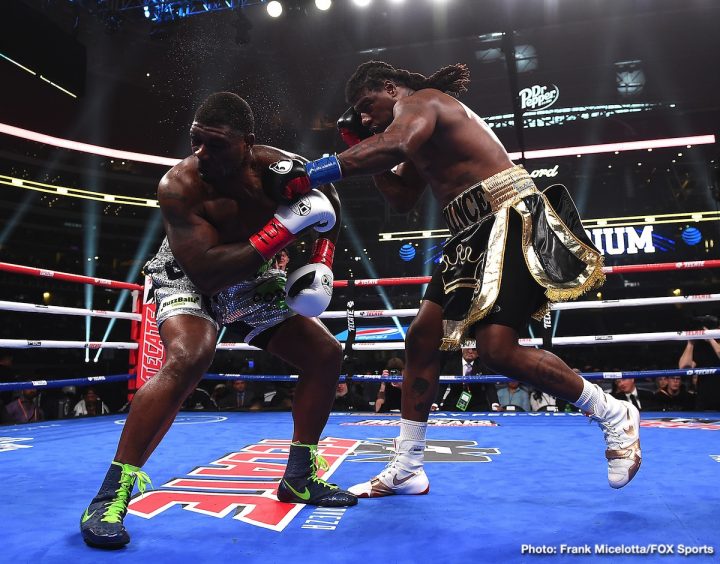 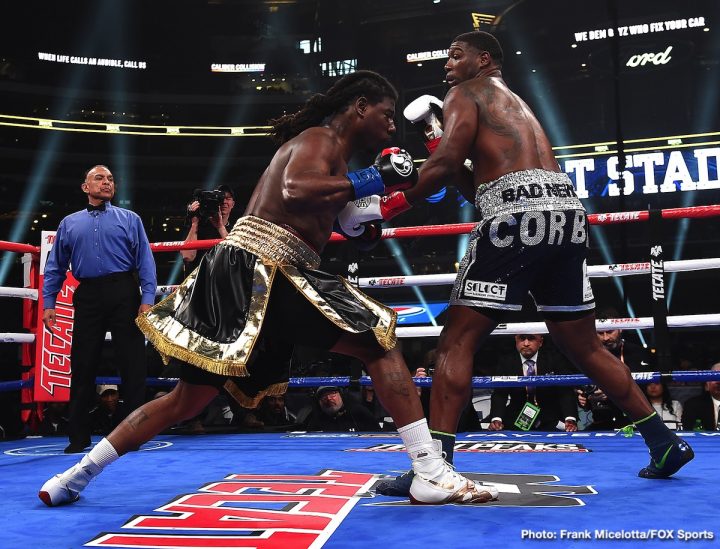 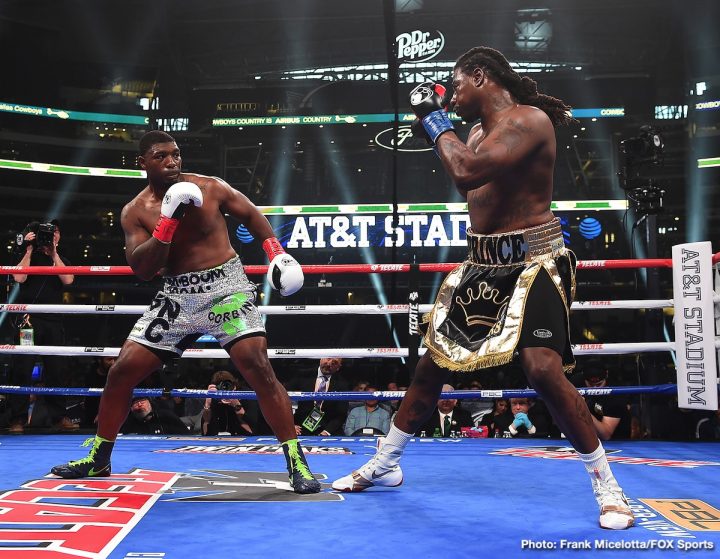