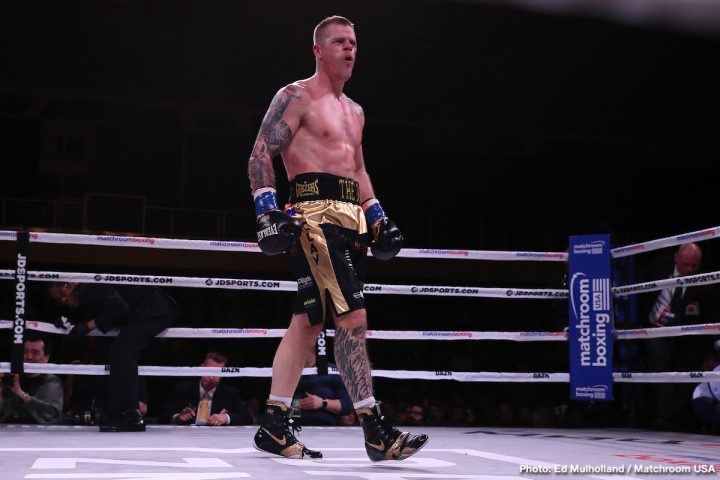 By Tim Royner: Eddie Hearn is planning on matching light heavyweight knockout artists Callum Johnson and Joe Smith Jr. in their next fight. He wants to have the winner of the Callum vs. Smith fight to face the winner of the Dmitry Bivol vs. Marcus Browne contest, which is about to be ordered. He sees the winner of the Johnson-Smith Jr. and Bivol-Browne fights being involved in a huge match in the near future.

Smith Jr. (24-3, 20 KOs) recently lost to WBA light heavyweight Dmitry Bivol by a 12 round unanimous decision on March 9 in Verona, New York. Smith, 29, had Bivol hurt at the end of the 10th round when he caught him with a big shot as the bell sounded to end the round. Smith wasn’t able to take advantage of the situation though, as Bivol recovered in between rounds and went on to dominate the 11th and 12th rounds in winning by the scores 119-109, 119-109 and 118-110.

“The fight that we want to make next is the Joe Smith Jr. fight,” Hearn said to IFL TV about wanting to match Callum Johnson against Joe Smith Jr. “Marcus Browne is going to get ordered to fight [Dmitry] Bivol, which is a good fight for New York. Then I think he should have the winner of Bivol against Browne. It’s an explosive fight style-wise, because Bivol was a little awkward for him [for Smith Jr.], but these two will have a tear-up,” Hearn said about the Callum Johnson vs. Joe Smith Jr. fight.

Callum Johnson (18-1, 13 KOs) defeated Sean Monaghan (29-3, 17 KOs) by a third round knockout on March 9th in a one-sided affair. Johnson had too much power for Monaghan, and he quickly put him away in the third round.

“He comes to fight, that’s what I love,” Callum Johnson said about Joe Smith Jr. “It’s a fight I think I can win, and I think I can make a statement.”

Smith Jr. has a pretty good chin. Johnson would be making a huge statement if he were able to knock him out. Smith has only been stopped once in his 10-year pro career in losing to Eddie Caminero by a 4th round knockout in 2010. Since then, Smith Jr. has been in with some good fighters like Bernard Hopkins, Sullivan Barrera and Bivol.

“The Joe Smith Jr. fight is more of a gamble [than the Sean Monaghan fight], but there are bigger rewards,” Hearn said about Callum Johnson having more to gain if he beats Smith Jr. than he got from his win over Monaghan.

There will likely be a title shot for Johnson if he beats Smith Jr., but that still doesn’t mean he’ll beat the Bivol vs. Browne winner. Those are both highly talented fighters with excellent boxing skills, and respectable power. Johnson could lose to both fighters. It’ll be a nice payday for Johnson if he can get the winner of the Bivol-Browne fight, but that might be all he gets, especially if he winds up facing Bivol. The Russian fighter is very technical, and hard to hit due to his emphasis on his defense. Johnson, 33, would have a better chance of beating WBO champion Sergey Kovalev or WBC champion Oleksander Gvozdyk. Those are both good light heavyweights, but they have flaws in their games that make them both beatable.

“I think that’s a massive showdown down the line, a year down the line,” Callum Johnson said about the Buatsi fight. “I think me and Buatsi can fill out arenas.”

Hearn is eager to match Joshua Buatsi (10-0, 8 KOs) against Callum at some point down the line. He sees that as a nice arena level fight.

“Why not put Buatsi in with Callum at some point?” Hearn said. “That’s an O2 filler. That’s a dangerous fight for either guy. They both aren’t afraid of trading,” Hearn said.