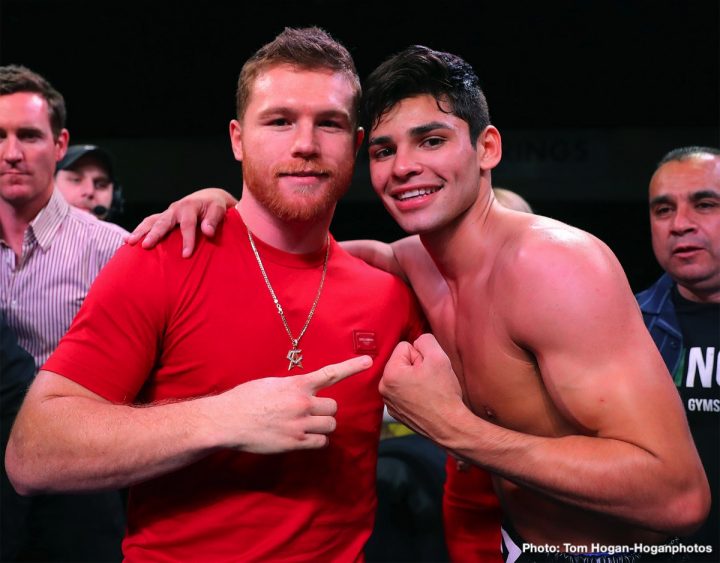 The young 20-year-old Garcia made easy work of Lopez in knocking him down in the second round. Lopez didn’t come out for the third round because he was too hurt.

Ryan is probably not ready to fight any of them. He wants the opportunity, but it might end in disaster for him.

After the fight, Garcia made it clear that he wants to fight next on May 4 on the Saul Canelo Alvarez vs. Danny Jacobs card on DAZN at the T-Mobile Arena in Las Vegas, Nevada. Garcia wants to be the chief support for the Canelo-Jacobs fight. Golden Boy Promotions haven’t yet decided whether they’ll place Ryan in the co-feature bout or one of their other talented prospects, contenders or champions. Golden Boy has a lot of other fighters that are a little further along in their careers right now compared to Garcia.

Ryan Garcia may not be ready for a high visibility co-feature spot on the Canelo vs. Jacobs card. Golden Boy needs someone that can bring in the fans, and they need to be capable of taking on the best. Garcia might not be ready to take on the best contenders this early in his career. His opponent from last Saturday night, Jose Lopez, had recently been knocked out by Jonathan Oquendo and had lost 2 out of his last 3 fights.

“Yeah,” Garcia said when asked if a world title shot is realistic. “I don’t know [who the world title shot will be against]. I’m just looking for the opportunity. I don’t care who it is. Whoever the champion is, that’s alright to me. I will assess it, and do whatever I have to do to beat him,” Garcia said.

Talking about fighting for a world title and actually doing it are two different things. It’s better if Ryan ‘Kingry’ Garcia talk about it without doing it, because he doesn’t look ready to mix it with lightweight champions Vasiliy Lomachenko, Mikey Garcia or Richard Commey right now. Garcia doesn’t look ready for even some of the contenders in the 135 lb weight class like Teofimo Lopez, Luke Campbell, Rances Barthelemy, Jorge Linares, Devin Haney and Jose Pedraza. Garcia needs more experience before he’ll be ready to take on the lions in the lightweight division. There’s nothing wrong with Ryan waiting four or five years before challenging for a world title. You have to see Garcia as still an amateur at this point, and he’s trying to build up the skills and experience to face the best one day. But if Golden Boy Promotions throws Ryan in with any of the talented fighters at lightweight, it’s likely going to end badly for him. To be sure, Garcia will gain experience from fighting the best right now, but it’ll be bad the bad kind in which he takes he suffers and is likely knocked out.

I’m training with Eddy Reynoso,” Ryan Garcia said. “I think I’m ready for a world title this year? Hell yes. Defense is the one thing with Eddy that we’re working on every day, and I’ve seen Canelo do it. You’ve seen how much he’s improved over the years, and I’m just learning from the best. So, the more and more I train with my brother [Canelo] right here, the more we’re going to get better”

Garcia is training with Saul Canelo Alvarez’s trainer Eddy Reynoso. The mistakes Garcia made last night against Jose Lopez are the same ones he made before he started training with Reynoso. Garcia still retreats going straight back with his head high in the air, and he’s still very easy to hit. Lopez had no problems connecting with his power shots on the chin of Garcia whenever he let his hands go. Garcia brags about his own punch accuracy, but he says little about how accurate Lopez was in connecting with his shots last night. Lopez couldn’t miss when he would throw one of his power shots. The only reason Lopez stopped throwing punches is because Garcia started nailing him with power shots in the second round, and that shut him down.

“I don’t need to name him,” Ryan said about Rolly Romero,” Garcia said. “He doesn’t need a name, because he don’t deserve it. He didn’t do anything. He did a sparring match. He did alright. That’s it, really. He’s going to be happy if he gets money. He needs money. He said, ‘Ryan Garcia’s not going to take $200K.’ I got money. He don’t understand. I got money outside of boxing. I’m good every month. It comes in like clock work, so I’m good. I have other outlets. You only have boxing. So therefore, you need this fight. I don’t need $200K, but will I take it? Of course. I didn’t say I wouldn’t take the fight for $200,000. I said, ‘if I knock him out, Mr. Mayweather, you need to give me $1 million dollars for just mentioning it to me, and then I knock him out. Other than that, there’s no point. Give me $1 million dollars. Thank you,” Ryan Garcia said.

Floyd Mayweather Jr. is probably not going to give Ryan Garcia $1 million if he beats Rolly Romero (8-0, 7 KOs). Golden Boy Promotions are probably not going to make the Garcia vs. Romero fight. There’s too much to lose if they make the fight. Garcia has a huge following on social media, and it could end badly for him if he faces Romero.

“Canelo just said, ‘stay focused. Do what you do in the gym,'” Ryan said.

Canelo Alvarez and Oscar De La Hoya both came into the ring after Garcia’s win over Lopez last night to be interviewed. Canelo says Ryan Garcia is, “The best prospect today.” That’s something that is hard to prove, because there are a lot of prospects.

“I’m probably the most high prospect in the history of boxing, other than [Mike] Tyson early,” Ryan Garcia said. “If there was instagram, he would probably have the same amount of followers as me,” Ryan said.