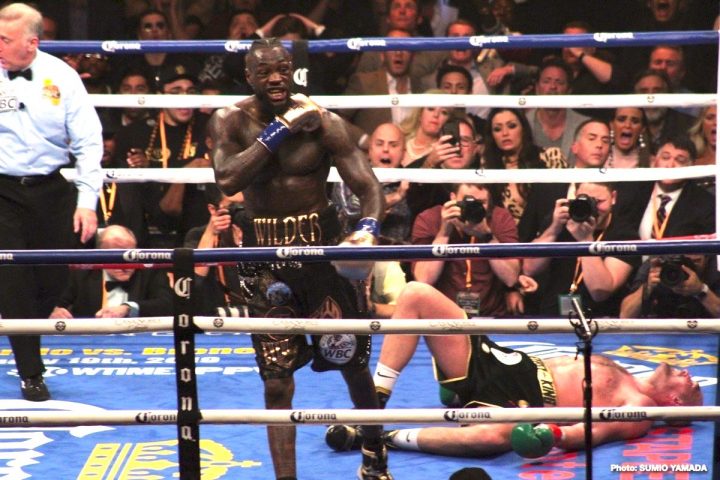 By Scott Gilfoid: Tyson Fury and his promoter Frank Warren’s announcement of a deal with Top Rank Boxing and ESPN on Monday makes putting together the rematch with WBC heavyweight champion Deontay Wilder a potentially tough, if not an impossible thing to do. However, Wilder’s co-manager Shelly Finkel still wants to try and make the rematch with former IBF/WBA/WBO champion Fury (27-0-1, 19 KOs), and the two networks ESPN and SHOWTIME working out a deal, according to ESPN.

Fury is said to have signed a 5-fight deal with Top Rank/ESPN for a massive amount of money. The question is, does Top Rank and ESPN want to have Fury face Wilder next, and potentially see him get knocked out in his first fight of his five-fight deal or do they want to build the fight up for a later date, possibly in the fifth fight of the contract? At this point, it would be an insane move for Top Rank to put Fury in with Wilder for a rematch. There’s too much to lose if Fury gets knocked cold by Wilder.

Finkel isn’t certain right now if SHOWTIME has an exclusive contractual right to broadcast the Wilder vs. Fury rematch or not. It’s going to be a tough to put the Wilder-Fury 2 fight together given that ESPN would potentially be showing the fight on PPV, as well as SHOWTIME. Dueling pay-per-views for the Wilder vs. Fury 2 fight would mean a lot less money for the networks. This isn’t Floyd Mayweather Jr. vs. Manny Pacquiao where there was so much interest in the fight that it didn’t matter that HBO and SHOWTIME both shared the broadcast of the PPV fight. Wilder vs. Fury 1 brought in 325,000 pay-per-view buys on SHOWTIME on December 1 last year. With those kinds of numbers, it’s easy to imagine the fight bringing in far fewer for each network if ESPN and SHOWTIME have to share a PPV broadcast. If the Fury vs. Wilder rematch is streamed on ESPN+, which is a subscription service goes for $4.99 per month, it’s easy to see a massive flood of boxing viewers going to ESPN to watch the Wilder-Fury 2 fight rather than paying approximately $70 to see the fight on SHOWTIME PPV. A lot of fans originally thought that there $4.99 subscription price would cover ALL boxing events on ESPN, but now they’ve found out that the bigger fights on that network will wind up on pay-per-view. It’s a different thing that the streaming platform DAZN, which has all their boxing events shown as part of the $10 per month subscription fee. There aren’t any pay-per-view fights on DAZN.

“We are hoping to make the fight and figure out how with this new relationship they have with ESPN that it can be done. I would want to try to make it with Showtime and ESPN (working together),” Finkel said to Dan Rafael of ESPN.com. “(Haymon) wants to make the fight and that whatever is realistic will get done.”

It sounds nice what Finkel is saying, but let’s be realistic here. Wilder vs. Fury rematch is dead in the water now in Gilfoid’s view. ESPN isn’t going to let Wilder KO Fury, and believe me; there’s a very good chance that happens if the fight takes place. Moreover, if the goes to purse bids, SHOWTIME could wind up with the fight. The predictable outcome is Top Rank and Fury will make a news announcement soon, saying they’re going in a different direction from Wilder, and will be facing someone else. There’s too much money on the line if Fury gets knocked cold by Wilder.

There has already been two postponements for purse bids for the Wilder vs. Fury rematch negotiations. They had reportedly been nearing a deal, but the news of Fury signing a monstrous £80million [$103 million U.S dollar] deal with Top Rank puts that in doubt. Top Rank is taking a major risk in paying the 6’9″ Fury that kind of money for a multi-fight deal. If Fury gets knocked out by Wilder or Anthony Joshua, his career could implode overnight. Although Fury looked good during large portions of his recent fight against Wilder last December, he might not be as good as he looked in that fight. Wilder was fighting poorly throughout the fight, missing badly with wild shots, and appearing almost uncoordinated. When the 6’7″ Wilder finally figured out how to connect with his power shots against Fury in the championship rounds, he twice planted the British heavyweight on the canvas in round nine and twelve. The rematch could see Wilder, 32, start in where he left off in the 12th, and make quick work of the 30-year-old Fury. Unless Top Rank has an opt out in their contract with Fury, in case his career goes belly up right away, they could be stuck with a fighter that is going nowhere fast. Fury earned a 12 round draw on the scorecards with Wilder with the judges scoring it 115-111 for Wilder, 114-112 for Fury, and 113-113. However, the way that Wilder finished so strongly, it leaves doubt whether Fury will last long against the Alabama native in the rematch, if there ever is one. Being signed with Top Rank Boxing could make it difficult if not impossible for a second fight to be made between them.

It’s quite possible the Wilder v. Fury 2 fight won’t be happening now. With Top Rank Boxing promoter Bob Arum adding Fury to his stable, he could elect to try and build him up slowly on the East Coast the way he’s doing with Vasyl Lomachenko and Teofimo Lopez in order to make it a big pay-per-view fight in the future. If Arum is able to build Fury into a star in the East Coast by having him beat the like of Top Rank fighters Kubrat Pulev, Bryant Jennings, Joseph Parker and Andy Ruiz Jr., then the fight with SHOWTIME fighter Wilder or Anthony Joshua, who is with DAZN, will be a bigger affair in terms of PPV buys. If Arum lets Fury face Wilder now, with it being shared on ESPN PPV and SHOWTIME PPV, there won’t be much money to be made for Top Rank. Given the huge amount of money Top Rank is paying Fury for his $103 million contract, they need to build him first into a star rather than throw him in with Wilder, and potentially watch him get poleaxed in the first six rounds. The way that Fury was knocked unconscious briefly by Wilder in the 12th round last December, his punch resistance might not be the same when/if he gets inside the ring with the hard hitting Wilder. It would be better for Top Rank to take their time before letting Fury get back in the ring with the devastating puncher Wilder.

If Fury has any say so in his choice of opponents, then it’s possible the rematch with Wilder could take place next. However, the network conflicts, could make the fight with Wilder undo-able at this point. Wilder vs. Fury isn’t a big enough fight to be shared shared on two different networks on the night for a pay-per-view broadcast in the U.S. This isn’t Floyd Mayweather Jr. vs. Manny Pacquiao. Fury is still an unknown with casual boxing fans in the United States, and it could take a while for him to become popular enough for a rematch between against Wilder to be a big PPV fight on ESPN. Five fights is nothing. Heck, it might take 10 to 15 fights in the U.S before Fury becomes a popular guy, and that would be only if he’s winning and looking impressive against GOOD opposition, not unknown fodder. With the way Fury fights, boxing and moving around the ring, it’s unclear whether he has the type of fighting style that will catch on with the boxing public in the U.S. Fury is a finesse fighter, and those type of guys don’t do well. Mayweather has always been a finesse fighter as well, but he had blazing hand speed that made him interesting to watch. Fury isn’t all that fast. He’s just a big spoiler type of heavyweight, and some of his fights are less thrilling to watch.