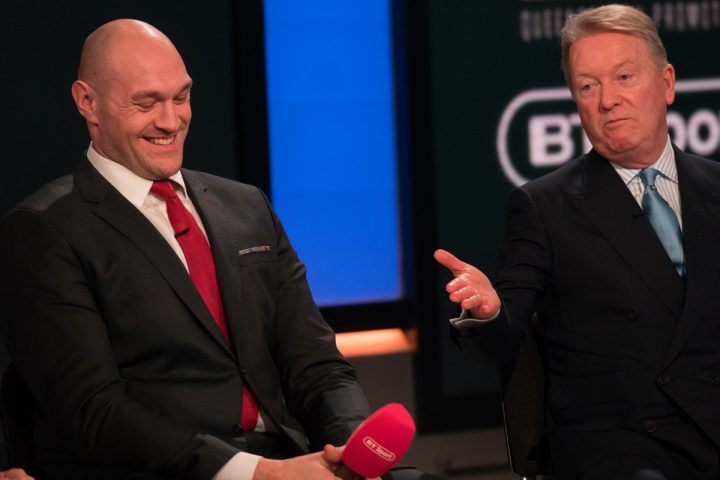 By Mike Smith: Tyson Fury (27-0-1, 19 KOs) insists that a rematch with WBC heavyweight champion Deontay Wilder (40-0-1, 39 KOs) is more makeable now than ever before after the announcement of his life-changing £80million co-promotional deal with Top Rank, which sets him up for life if he’s able to make it to the end of the contract to get the full amount that money.

While signed with Top Rank, Fury’s fights will be shown on ESPN. The money will be good for the 30-year-old Fury, but whether he’ll have success in getting the big fights is open for debate.

If the Deontay Wilder rematch doesn’t get made, it’s still a positive for Fury being that he can win over a lot of boxing fans in the U.S in a hurry with his fights being televised on ESPN now. Fury has been fighting his entire career in the UK with the exception of his match last December in Los Angeles against Wilder. Being seen on ESPN will give the 6’9″ Fury the chance to sell himself to a wider audience in American. It’s going to take more work publicity wise for Fury to get the attention of the 327 million Americans.

On the fact of it, Fury signing with Top Rank will make a second fight with Wilder, as well as a match against Anthony Joshua quite difficult to make. Joshua is with Matchroom Sport, and fights on DAZN, whereas Wilder is with Premier Boxing Champions and fights on SHOWTIME. Those networks aren’t going to be thrilled to see those two fighters facing Fury on ESPN, which would cut into their bottom line if they were to give the green light to those fights taking place.

“As far as I’m concerned, the fight is more makeable now than ever because we have the biggest boys in the game behind us and I’m only a fighter,” Fury said. “I can only fight who they put in front of me. I want the biggest fights., the Joshuas, the Wilders of the world, and everyone else out there too.”

The part where Fury said, “I can only fight who they put in front of me,” suggests that he’s going to be fighting a lot of less desirable heavyweights from this point on. Top Rank has a small stable of fighters at heavyweight that they’ll likely exhaust one by one in putting in with Fury. The fights might not draw a lot of attention from U.S boxing fans, but with Fury’s fights being televised on ESPN, they’ll be watched passively by the many fans that tune into that channel to watch sports on a daily basis. Whether

It’s possible that Fury, 30, is either naive when it comes to understanding how networks get in the way of fights in the U.S or he’s winding the boxing fans up still talking about the Wilder fight as being “makeable.”

Fury’s move in signing with Top Rank and ESPN effectively puts him in a different league as far boxing competition goes. It could men that Fury mainly fights Top Rank guys and fighters that aren’t with SHOWTIME, FOX or DAZN. If you take away the most talented fighters with those networks, you’re left with a lot of obscure guys that won’t attract a lot of interest.

“It gives me an opportunity to be shown to the most people in the world,” Fury said about being with Top Rank Boxing and fighting on ESPN. “And be in the position not to be an opponent. They have to come to the Tyson Fury show now.”

Fury doesn’t see things right apparently. Being on ESPN doesn’t mean that Wilder and Joshua are going to come to him. Those are still fights where they’re going to need to try and meet in the middle, and it remains to be seen whether the different platforms are going to be able to agree to having fights shown dual networks. Wilder vs. Fury II is a good money fight if it’s shown on one network, but putting it on two networks, that changes everything.

With Fury fighting on ESPN, he’s a league that will make it difficult to compete with the fighters on different networks like Joshua and Wilder. In the long run, it might not be a bad thing for Fury, though. If Fury is a different league, if your will, than Wilder and Jarrell ‘Big Baby’ Miller, that keeps him from having to fight them and potentially lose to all of them. Losing to any or all of them would be bad for Fury’s career without a doubt. If Fury’s entire contract with Top Rank is guaranteed, then he could afford to take losses, but if it’s a contract that can be terminated early by either side, then it’s a good move for him not to take risky fights.

It was believed by some that Fury would have made $25 million for the rematch with Wilder. That’s obviously far less than the huge £80million deal Fury signed for with Top Rank. That deal is part of what’s thought to be a five-fight deal. Fury wouldn’t make $25 million per fight unless he was going to be facing Wilder and Joshua every time.

If Fury didn’t understand how him signing with Top Rank would make things more difficult in putting together fights with Wilder and Joshua, he’s going to soon find out that reality. Whether the the money that Fury still makes it worthwhile for him to have made the move that he did is unknown. If the money is the main thing for Fury rather than taking on the best fighters in the heavyweight division, then he’ll have accomplished his goal in inking a co-promotional deal with Top Rank.

It was believed that the negotiations between Wilder and Fury would be wrapped up by now for a May 18 fight in New York. This fight was expected to take place before the scheduled June 1st fight between Joshua and Jarrell ‘Big Baby’ Miller at Madison Square Garden in New York.

This is where Wilder, Fury and Joshua sit in fighting on different network platforms:

It’s good for those three fine heavyweights that they’re making excellent money for their fights, but it’s going to make things extremely difficult to put fights together between them. Joshua’s promoter Eddie Hearn of Matchroom Boxing is trying to remove Wilder from the equation by having his fighter Dillian Whyte face Dominic Breazeale for the WBC interim heavyweight title. If Whyte beats Breazeale, he’ll be Wilder’s new mandatory challenger, and it’ll only require the WBC to make the move or ordering the fight between them before Hearn to potentially realize his dream of having Deontay erased from the equation. If Whyte beats Wilder, then Hearn doesn’t need to worry about trying to negotiate a deal between Joshua and Wilder that both DAZN and Showtime will be happy with.

Deontay Wilder still intends on fighting May 18, with or without Fury »