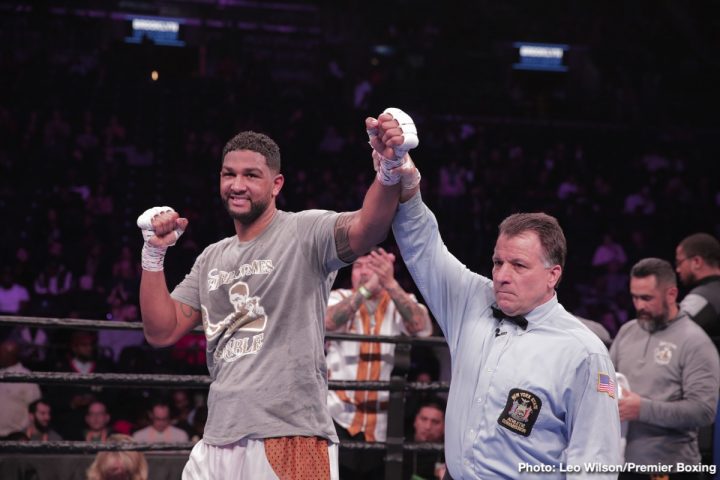 By Tim Royner: The rematch between Deontay Wilder and Tyson Fury is reportedly in jeopardy, and Dominic Breazeale says he’s ready to step in and fight ‘The Bronze Bomber’ for his WBC heavyweight title. Breazeale (20-1, 18 KOs) is currently in negotiations with #1 ranked World Boxing Council contender Dillian ‘The Body Snatcher’ Whyte (25-1, 18 KOs) for the WBC interim heavyweight title. However, Breazeale, 33, says he’ll take the world title shot against Wilder if it’s offered to him.

Breazeale says he’s waiting for the phone call from Wilder for him to be his opponent for his next fight date, which could be on May 18. Wilder said that if he can’t get the rematch with Fury (27-0-1, 19 KOs), who made big news this week in inking a multi-contract with Top Rank Boxing to fight on ESPN, then he’ll take the fight with Breazeale or Adam Kownacki on May 18.

”I’m excited. That’s the biggest thing that’s happened in the last 15 months,” Breazeale said to Premier Boxing Champions. “In a situation like that where Fury kind of pulls out of his situation with his rematch [with Wilder]. It’s the best thing for the WBC mandatory. I’m super excited to take the fight, and waiting for the phone call and the date,” Breazeale said.

It’s bad news for Whyte that the Wilder vs. Fury 2 fight is now in jeopardy, because Breazeale is the WBC mandatory still, and Deontay will likely choose him as his next opponent. There’s bad blood between Wilder and Whyte’s promoter Eddie Hearn of Matchroom Boxing, so it’s unlikely that we’ll see a Wilder-Whyte fight anytime soon. If Wilder makes the call, it’s almost guaranteed that he chooses to fight Breazeale over Whyte.

Since signing with ESPN earlier this week, Fury has sounded ambivalent about making the rematch with the unbeaten Wilder (40-0-1, 39 KOs). Fury says it’s up to his new co-promoters at Top Rank Boxing to decide which direction they want him to go in for his next fight. Top Rank CEO Bob Arum has made it clear that he wants to let the Wilder vs. Fury II fight marinate until at least later this year before he makes the fight. Arum wants both fighters to take an interim fight before meeting up later this year. Arum hasn’t mentioned who he would want Wilder and Fury to face before they meet up in a rematch, but it could be guys that could pull off an upset and ruin the rematch. If Fury faces Kubrat Pulev next, a guy that is rumored to be a possibility for his next fight, he could lose that fight. If Wilder defends against Breazeale or Dillian Whyte, he could get beaten by one of those guys a well. In theory, Arum has a nice idea of letting the Wilder vs. Fury rematch marinate if the two of them were guaranteed to win their next fights, but there’s too much risk involved for either of them. These guys aren’t the second coming of a young Mike Tyson. Wilder and Fury are vulnerable fighters, who could lose at a moment’s notice depending on who they’re put in with.

”That’s a fight that we’ve been negotiating. Me and Dillian Whyte’s people have been talking,” Breazeale said. “Al [Haymon] is doing a great job of putting that together. We’re actually moving that ball, trying to get a date set on that. With this news of Wilder coming out, I can’t pass on a world title. If I don’t get the world title, I’ll definitely take the WBC interim title,” Breazeale said.

There’s still a good chance the Wilder vs. Fury II fight gets made in May, but it’ll come down to what Tyson wants to do. Wilder clearly wants that fight, so he’s not someone that you have to ask which direction he wants to go in. Wilder absolutely wants the rematch with Fury. As long as Fury feels the same way, then that fight will likely take place in May or June. With the huge contract that Fury was given by Top Rank Boxing, he might not as interested in fighting Wilder now, because he can make good money fighting soft opposition like the ones he started his comeback against in Sefer Seferi and Francesco Pianeta.

“Fury is right [him being THE GUY at heavyweight]. He’s a pretty darn decent fighter,” Breazeale said. “Can you call him “the guy”? Not so much. He just had a draw with Deontay Wilder, who I’m not a big fan of. He’s not much of a heavyweight champ. Myself, I’m the guy, and if it’s not me, Joshua is the only guy to beat me. As of right now, Joshua is making his America debut. I think Wilder is doing a great job of holding the belt, but he hasn’t fought anybody with the stature of myself. If it’s up to me, I’ll take Deontay Wilder first. I want Deontay Wilder to pick a date and a venue, and I’m ready to go as of tomorrow. Let’s get it done. The same thing with Dillian Whyte though. Dillian Whyte did a good job of getting himself into position where the WBC has ordered the fight. I like it. It’s been about a year now. We’ve been going back and forth. He wants it on his turf. I want it on my turf. We’ll see who gets what, but at this time, I’ve got my eyes focused on Wilder,” Breazeale said.

Breazeale makes it VERY clear that he wants the fight with Wilder, not Whyte. It’s going to be up to Wilder what he wants to do.

Whyte wants the title shot against Wilder, as he feels he’s earned it with his #1 ranking with the World Boxing Council. However, Breazeale fought in a WBC eliminator. The WBC has ordered Breazeale and Whyte to fight for their interim heavyweight title. It’ll be up to the WBC to decide what to do if Wilder selects Breazeale straightaway as his next opponent rather than waiting for the Breazeale-Whyte to fight to play put. Does the WBC try and stop Wilder from fighting Breaeale if he makes the decision to fight him? If so, then why would the WBC do that? By stopping Wilder from fighting Breazeale, it would look like the WBC is trying to help Matchroom by giving their fighter Whyte a chance to fight his way into a title shot against Wilder. It’s unlikely the WBC will try and prevent Wilder from fighting Breazeale next if he makes that decision, but it could be interesting if the sanctioning body does try and stop that fight from happening.

Wilder vs Fury 2 in jeopardy? @MikeCoppinger gives us the inside scoop on all the latest boxing news. pic.twitter.com/M4HlSWeENE

Whyte has made some mistakes along the way that has hurt his chances of fighting for a world title. He didn’t take part in the WBC’s eliminator fight with Luis Ortiz when they ordered that fight. Further, Whyte had a chance to face IBF/WBA/WBO champion Anthony Joshua on April 13, but he failed to negotiate the fight. Joshua is no longer mentioning Whyte’s name as a future opponent for him. Wilder doesn’t appear t be isn’t interested in fighting Whyte either. Oleksander Usyk is moving up in weight to fight Alexander Povetkin, and then Joshua. Whyte might end up having to wait a long time before he gets his title shot, and if he’s matched against someone a little too good before then, he could lose. Whyte is going to need to fight someone to stay busy. Hearn can put him back in with Joseph Parker, who he beat under a cloud of controversy last year. A rematch could go the other way. Parker will definitely be ready for the roughhouse tactics that Whyte brings to the fight. We could have a rabbit punching and low blow affair.


« Brandon Rios – Humberto Soto on Saturday – Where and How To Watch

Callum Smith and Oleksander Usyk doubleheader possible in May »