Callum Smith and Oleksander Usyk doubleheader possible in May 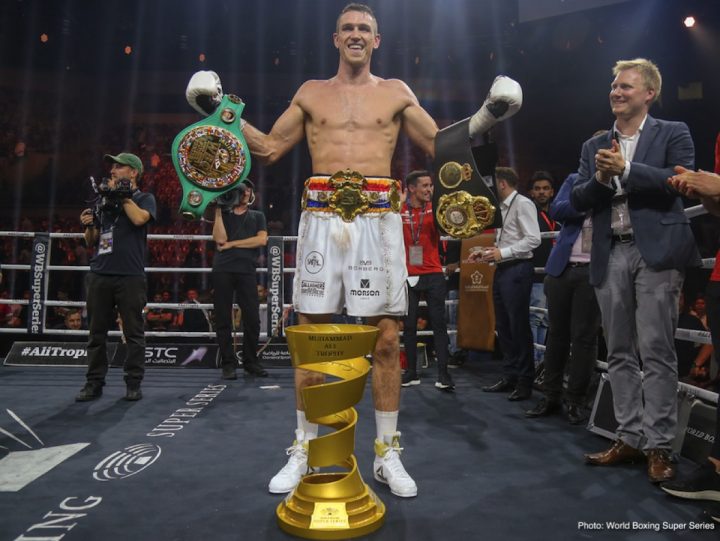 By Trevor McIntyre: Eddie Hearn is interested in having WBA Super World super middleweight champion Callum Smith (25-0, 18 KOs) fight an opponent still to be determined on unbeaten unified cruiserweight champion Oleksander Usyk’s card in a doubleheader in the United States in May in Chicago or on the undercard of Anthony Joshua’s next fight on June 1 against Jarrell ‘Big Baby’ Miller in New York at Madison Square Garden.

Usyk’s potential opponent for the May card in Chicago is former WBA heavyweight champion Alexander Povetkin (34-2, 24 KOs), who was knocked out in the seventh round by IBF/WBA/WBO champion Anthony Joshua in his last fight on September 22 at Wembley Stadium in London, UK. Usyk vs. Povetkin would match two Olympic gold medalists against each other, which would be a fact that Hearn would use to attract interest from U.S boxing fans to subscribe to DAZN to see the two of them go at it.

Smith, 28, and Usyk are both recent winners of the World Boxing Super Series tournaments at super middleweight and cruiserweight respectively. Having them both fight on the same card in the United State will attract a great deal of attention from the hardcore boxing fans, if not the casual fans. Hearn wants to help Callum become a star in the U.S, and it helps to package his fights with someone that the American fans have heard of like Usyk. The two of them will help build interest in their doubleheader on DAZN.

“I want a double-header with Usyk and Smith on the same card in May in Chicago or June [in New York] are options before coming back and fighting in a big fight,” Hearn said to skysports.com.

If Callum Smith gets though his fight in the doubleheader with flying colors, then Hearn wants to have him face either the winner of this Saturday’s fight between former IBF super middleweight champion James DeGale and Chris Eubank Jr. or former WBO middleweight champion Billy Joe Saunders, who is moving up in weight to Shefat Isufi for the vacant WBO 168 lb title on April 13. If Saunders wins that fight, Hearn could look to make a unification match between him and Callum. The DeGale-Eubank Jr. winner will a great option that might prove too hard to resist for Hearn to put in with Callum for a title defense. The DeGale vs. Eubank Jr. fight this Saturday won’t have a title on the line, as James vacated his International Boxing Federation super middleweight strap recently when the IBF ordered him to face his mandatory Jose Uzcategui.

“Billy Joe Saunders has moved up to super-middle. Also Chris Eubank Jr vs James DeGale – he could fight one of those guys in the autumn,” Hearn said.

Hearn says there’s a possibility Callum Smith could fight on the Joshua vs. Miler card on June 1 in New York, but he’s not sure if that can happen.

The fight that Smith was hoping to get against former two division world champion Andre ‘SOG” Ward in Anfield in Liverpool, England failed to happen. WBO light heavyweight champion Sergey Kovalev and his promoters are interested in putting together a fight against Callum if he wants to move up to 175 to challenge for the title. However, Smith won’t likely make that move to face Kovalev unless he has no other options available for him at super middleweight. Given the news of Saunders moving up to 168 to challenge for the vacant WBO title, and now the DeGale vs. Eubank Jr. fight taking place this weekend, Smith has a lot of great options available for him in the near future at super middleweight. There’s no need at this time for Smith to move up to light heavyweight at this time to face the big punching Kovalev, but that’s a move that we could very well see in the near future. There’s a good money to be made for Callum in facing Kovalev, and the publicity would be huge for him. It would be a good career move for Smith, even if he ends up losing the fight. As we saw with Carl Froch’s career, he still came out ahead when he fought Andre Ward, and lost to him in the final of the Super Six tournament in the U.S. If anything, Froch’s popularity soared after the Ward fight. Kovalev might be the best option for Callum if he wants to gain a tremendous amount of notoriety worldwide.

The Top Rank Boxing promoted Gilberto ‘Zurdo’ Ramirez would be an excellent option for Callum to fight. However, Top Rank promoter Bob Arum might not want to risk Ramirez’s perfect record in matching him against Callum. Ramirez has vacated his WBO super middleweight title, and he’s moving up to light heavyweight to go after the champions in that weight class. A fight with Smith might be viewed as a risky backwards move on Ramire’s part. Arum should have matched Ramirez with Smith when he was still fighting at super middleweight, as that would have been a good fight for him to build his name brand in the U.S.

Usyk (16-0, 12 KOs) will have a good test in fighting the 39-year-old Povetkin. If Usyk wins this fight, it’ll help pave the way for a fight between him and Anthony Joshua in the spring of next year. That’s when Hearn plans on putting those two together in a big fight.

Usyk will likely fight again before the end of 2019, possibly against Luis ‘King Kong’ Ortiz. Hearn might not want to put Usyk in with a fighter with the kind of punching power and talent of Ortiz, but you can bet that he’ll mention him frequently to help get attention from boxing fans.