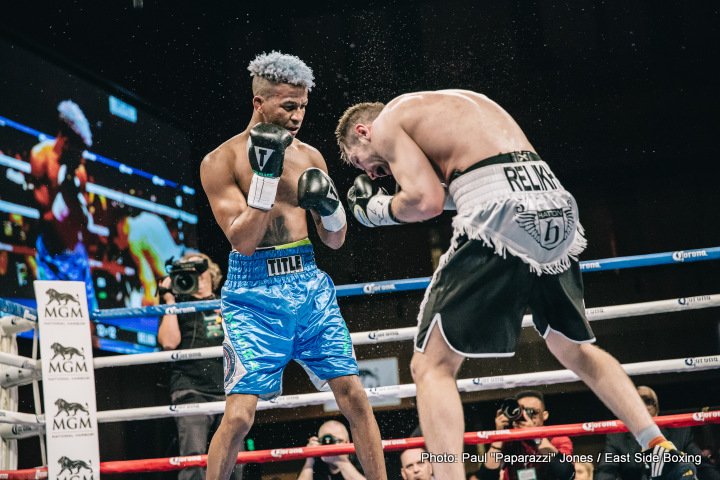 “It will be very important for me to conquer this belt against a warrior like Easter,” said Barthelemy to elnuevoherald.com.

Barthelemy and Easter Jr. are hardly deserving to be fighting for the WBA’s secondary lightweight title right now. The 28-year-old Easter Jr. lost his last fight to Mikey Garcia by a 12 round unanimous decision last July in a one-sided defeat. Easter Jr., 5’11”, was no competition for Garcia, who ran him through like he was nothing in that fight. It was never competitive. The WBA allowing Easter Jr. to fight for their WBA ‘regular’ lightweight title right now looks strange. There are a lot of contenders in the WBA’s top 15 rankings that have been winning lately, and aren’t coming off losses like Easter Jr.

For his part, Barthelemy was soundly beaten by Kiryl Relikh by a 12 round unanimous decision last March in a failed bid to win the vacant WBA light welterweight title. Relikh was too powerful for Barthelemy. You can partly excuse the loss for Barthelemy by blaming it on him facing a guy that was too strong and heavy handed in Relikh. After Barthelemy moved up to 140 in 2017 after campaigning at lightweight for 2 years, it was obvious that he was going to have major problems existing in that weight for any length of time as a major player.

Barthelemy was too weak and fragile for the light welterweight division. The only reason Barthelemy won the first fight against Relikh is because he was a guy that was still green, and not fully prepared to face someone with his experience. In the second fight, Relikh was a different animal, and he went after Barthelemy and worked him over for 12 rounds in winning a wide decision.

Barthelemy bounced back from that loss to defeat journeyman Robert Frankel (36-20-1, 8 KOs) by a third round knockout at 140 last December. Nevertheless, Barthelemy decided to move back down to lightweight rather than test himself for a third time against Relikh or fight someone arguably more difficult like Jose Ramirez, Ivan Baranchyk, Regis Prograis or Maurice Hooker.

“I have not stopped thinking about a belt at 140, so this is part of a strategy to try again,” Barthelemy said.

The writing is on the wall that Barthelemy lacks the punching power to hang with the best at 140. He’s much better off fighting at lightweight or super featherweight. Barthelemy vacated both of his world titles he held in those weight classes.