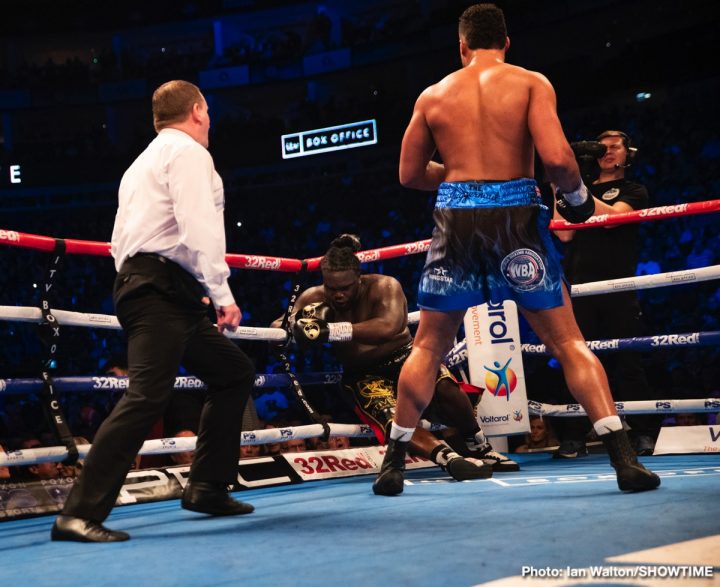 By Mike Smith: Unbeaten heavyweight contender Joe ‘Juggernaut’ Joyce (8-0, 8 KOs) stayed unbeaten in defeating a badly out of shape looking former WBC heavyweight champion Bermane Stiverne (25-4-1, 21 KOs) by a sixth round knockout on Saturday night in a scheduled 12 round fight on SHOWTIME Championship Boxing at the O2 Arena in London, UK.

This was a World Boxing Association heavyweight eliminator. With the win, Joyce, 6’6″, is now the mandatory challenger to WBA ‘regular’ Manuel Charr.

Stiverne weighed in at a career high of 273 lbs last Friday at the weigh-in, and he looked unmotivated, as if he took the fight for a payday and nothing. The fight was expected to be over with much faster than the sixth round. That’s a big negative for Joyce that it took this long to knockout Stiverne with the horrible condition that he came into the fight at. WBC heavyweight champion Deontay Wilder knocked Stiverne out in the first round in his previous fight in November 2017, and he was in poor shape for that one in weighing a flabby 254 lbs. Stiverne weighed 19 lbs heavier than that at 273 lbs at the weigh-in, and looked like he’d trained by eating pies on his couch.

The 2016 Olympic super heavyweight silver medalist Joyce hurt the 40-year-old Stiverne with a right hand to the head in round six. Joyce, 33, then unloaded on the badly hurt Stiverne, which prompted referee Howard Foster to step in and stop the contest. The official time of the stoppage was at 2:20 of round six.

In the 2nd round, Joyce hurt Stiverne with a big shot. A round later, Joyce scored a knockdown in the third.

At the end of the fight, Stiverne’s head looked swollen from the heavy shots he was hit with. Joyce doesn’t have any hand speed to speak of, but he has power behind his slow shots. Stiverne was eating them one after another without blocking any of them. It would been nice for Stiverne to have blocked a few of them, but it wasn’t in him to do that. Joyce was fighting with his usual style tonight in throwing nonstop punches, and not putting a lot of power at times.

Occasionally, Joyce would load up on a big right hand that would get Stiverne’s attention, but for the most part he was focusing on hitting him with nonstop stop 1-2 combinations, looking like a windup robot instead of a ‘Juggernaut.’ Getting hit with all those shots from a guy with the kind of size Joyce has going for him wore Stiverne down completely. He took the punishment for the first five rounds, but by the sixth, he was done. The referee Howard Foster should have thought of stepping in and halting the fight after the fifth, because Stiverne was taking a bad beating.

Although Joyce got the win, it wasn’t impressive stuff from him. He looked very slow with his punches, and his defense wasn’t there tonight, not that it ever has been in the past. Joyce’s trainer Abel Sanchez compared him to a young George Foreman this week. That’s arguably an insult to Foreman, because he was faster than Joyce, even when he came back in his 40s to capture a world title age 45. Foreman was faster than Joyce in his youth and in his 40s, and he was more powerful and he more boxing skills.

Foreman had a great jab, uppercut and hook that he could throw with power. His jab was one of the best Joyce doesn’t have any of that. He’s got some punching power, but he’s not a tremendous puncher like Foreman was. In looking at how Joyce tonight, it’s no wonder that his trainer Sanchez rejected Luis ‘King Kong’ Ortiz (30-1, 26 KOs) as an opponent for him tonight. Sanchez felt that the 33-year-old Joyce wouldn’t be ready for a skilled old lion like the 39-year-old Ortiz. It probably doesn’t matter how long Sanchez wants to wait on that fight. The southpaw Ortiz is still going to be more highly skilled two to three years from now than Joyce is right now. Ortiz is faster, stronger and more skilled. If Ortiz had the wide open Joyce in front of him tonight, he would have knocked him out quickly. It would have been a mismatch.

As bad as Joyce looked tonight, he would have a very good chance of knocking out Jarrell ‘Big Baby’ Miller if he’d been in there with him. Joyce is like a better version of Miller with more height, reach, power and a better body puncher. It’s interesting that IBF/WBA/WBO heavyweight champion Anthony Joshua chose Miller, 30, as his opponent for his June 1 fight instead of Joyce or Luis Ortiz. Both of those guys would be a vast improvement over Miller.

As for WBA ‘regular’ heavyweight champion Manuel Charr, Joyce will likely beat him without any problems. Charr is pretty limited, and not on the same level as Joyce. Charr is more on the level of Stiverne. An in shape Stiverne would likely have his way with Charr. It’s unclear whether Stiverne would bother to train even for a fight against Charr. That’s the troubling thing. If Joyce can get his hands on the WBA ‘regular’ heavyweight title, then he can eventually get a fight against Joshua, as long as he doesn’t have to face anyone too good in making defenses of the WBA ‘regular’ belt.