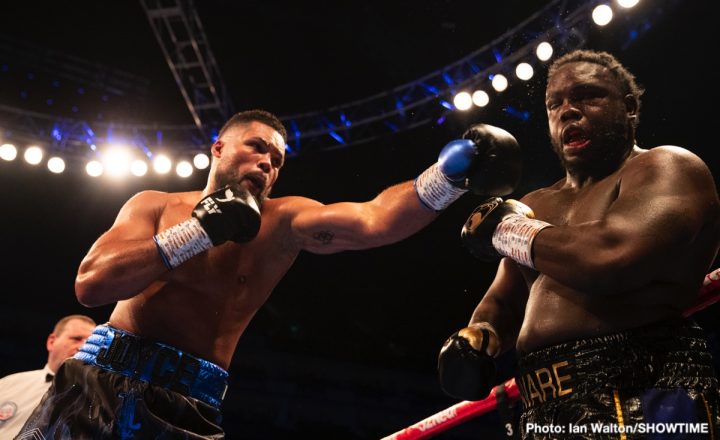 By Jeff Aranow: Joe Joyce (8-0, 8 KOs) will be fighting next for the WBA heavyweight world title against champion Manuel Charr after stopping Bermane Stiverne (25-4-1, 21 KO) in the sixth round on Saturday night.

Joyce used his size and his high volume punching style to batter the former World Boxing Council heavyweight title holder Stiverne for six rounds before the referee stopped the fight at the O2 Arena in London, UK. The fight was shown on SHOWTIME Championship Boxing in the U.S.

Joyce, 33, says he wants to have two more similar fights like tonight’s before he’s ready to take on the top guys Anthony Joshua and Deontay Wilder. Joyce will need to fight sharper opponents to get him reedy for those type of heavyweights if he wants to win.

“Big things are coming. My next one will be for the WBA Regular [heavyweight belt],” Joyce said. “I need to have a couple more fights like this and then I’ll be ready for the big champions.”

Joyce will be taking on WBA champion Manuel Charr (31-4, 17 KOs) for his belt. Charr, 34, won the vacant World Boxing Association heavyweight 15 months ago in beating Alexander Ustinov, and he’s yet to defend it Charr is going to have his hands full in trying to deal with the 6’6″ 265 pound Joyce when they meet up. Joyce will likely be a heavy favorite for when that fight does eventually come about later this year.

Joyce clipped Stiverne, 40, with a big right hand in round two that had him out on his feet. Stiverne was able to weather the torm somehow, thanks to his recuperative powers, but it was ugly to watch him take so many heavy shots. The referee Howard Foster showed a great deal of patience in electing not to stop the fight in the round, because he could have and no one would have criticized him for doing so.

In round three, Joyce dropped Stierne with a beautiful right hand to the head that sent him down. Stiverne was able to get up off the deck to make it out of the round by firing back a lot of hard shots in an effort to keep Joyce off of him. It didn’t work, as Joyce continued to fire big sledgehammer shots one after another, but it slowed him enough for Stiverne to finish the round without hitting the deck a second time.

Joyce was at risk of gassing out after the third round. He slowed his pace a little in order to keep going without getting ragged. It was clear that Joyce had slowed up intentionally to make sure he had enough in the gas tank to finish Stiverne, who is known for having a great chin. Stiverne stayed in there with Deontay Wilder for a full 12 rounds in their first fight in 2015, taking shot after shot without hitting the deck. We didn’t see that version of Stiverne tonight, however. He’s older now at 40, and wasn’t in the same kind of condition he was in that fight.

“I was hitting him with everything I had, including the kitchen sink,” Joyce said. I listened to Abel (Sanchez) in the corner, did everything he said and it went well.”

The 2016 Olympic Silver Medalist Joyce was pounding on Stiverne in every round, letting him have it with shots. Joyce’s jab was working well for him on the outside, but he wasn’t content to win that type of way. Joyce wanted the knockout, and he went all out to make sure he produced one.

In the sixth, Joyce was unloading on the near helpless Stiverne with big shots that caused the referee Howard Foster to step in to stop the fight at 2:26 of the round. Stiverne didn’t complain at the stoppage. He looked relieved.

“Big respect to Stiverne – like a true champion, he’s very tough and was still throwing shots, but I guess I was just a bit too much,” Joyce said. “He’s such a tough guy that he took those shots no problem.”

The reason Stiverne was able to take the shots is they were thrown slow enough by Joyce for him to see them clearly, and brace for them. Joyce has a lot of power, but his shots were easy to see coming, and that allowed Stiverne to hang around. But with the power that Joyce had on his punches, it didn’t matter that they were slow shots. Stiverne was still struggling with the strength of the shots. The force of the punches was ultimately too much for Stiverne to take for him to stay in there for any longer than the sixth. If Foster hadn’t stopped the fight when he did, Stiverne almost surely would have been dropped and finished off if he got back up. It was clearly the end of the fight.

If Joyce doesn’t fight for a world title in his next fight, then his promoters at Ringsports will need to find a good opponent for him to fight. He says he wants Luis ‘King Kong’ Ortiz, but he would need to work that out with his management and trainer.

DeGale to contemplate retirement after loss to Eubank Jr. »