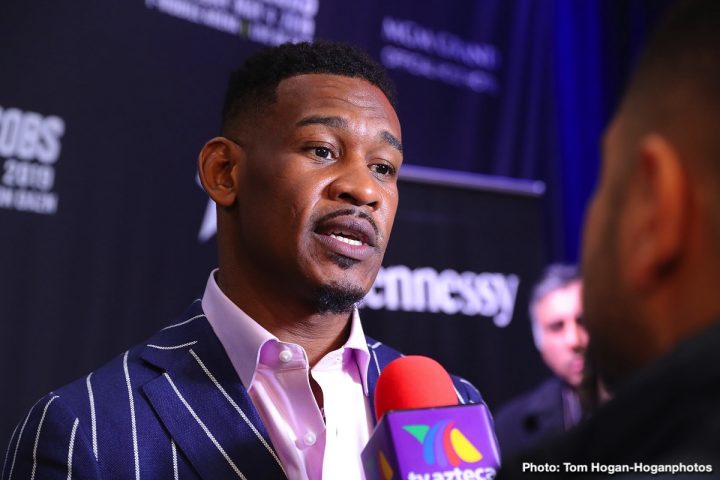 Jacobs sees himself as a much different fighter than GGG. Canelo (51-1-2, 35 KOs) beat Golovkin by a close decision last September. The fight was close enough to go either way.

Jacobs believes with his style of fighting, he can take the judges out of play entirely by knocking Canelo out. Jacobs doesn’t think he needs a knockout to win the fight. He sees himself as being capable of winning a 12 round decision if he has to. He thinks the judges will be held accountable for their scores, and thinks that’ll feel pressure to do a good job scoring the fight.

“They want the star power and mega fights. Sometimes I’m out of the equation, because I know I’m more of a threat,” Jacobs said to Fighthype in talking about how he’s viewed as a threat by the popular fighters, who avoid him sometimes. “My hats off to Canelo for accepting this fight, because I didn’t think I was going to get it. I just felt it would fall through; whether it was them low-balling me, whether it was a weight situation or whether it being a case of me being a champion. I wanted to make sure I got the respect I deserved. When everything across the board made sense for me, I signed my part of the deal, and as soon as I got the word Canelo signed his part of the contract, I was jumping for joy,” Jacobs said.

What Jacobs might not realize is he probably wouldn’t have gotten the fight with Canelo if not for the two of them being with DAZN. The huge contract tat DAZN is paying Canelo (51-1-2, 35 KOs) to have him on their platform means that they need him to fight the best fighters available to bring in the subscribers. Since Jacobs is with DAZN, it makes him a a logical opponent. Being the

“I actually thought I won the fight,” Jacobs said about the Gennady Golovkin fight in 2017. “Even with the knockdown, I thought I did enough to win a close decision. Going back and looking at the fight, I truly felt I won. In my mind, I truly felt that I won. I truly feel with my style, and styles make fights, [I can beat Canelo]. Canelo beating GGG doesn’t actually mean he beats me, because styles make fights. In my opinion, based on my style, and what I bring to the table, yes, I do believe I can stop Canelo. But my goal is to make sure I secure the victory with no drama, with no controversy, with no issues, who the decisive winner is. That’ my goal,” Jacobs said.

The only time that Canelo has looked susceptible to getting knocked out during his career was in his fight against Jose Miguel Cotto in 2010, and against Golovkin in their first fight. Cotto flurried on Canelo, and landed a bunch of shots that had him ready to be knocked out. If Cotto had a little more size and power he would have finished him off for sure. In the 12th round of Canelo’s first fight with GGG in September 2017, Golovkin unloaded with a storm of shots that had Canelo looking hurt as the fight ended. Those two fights showed clearly the best way to try and KO Canelo. You’re not going to knockout Canelo by throwing single power shots, and giving him long rest breaks between those big punches. The best things that works on Canelo is to flurry on him and have him fighting hard to keep from being overwhelmed with shots.

Jacobs is right about his view that Canelo’s win over Triple G doesn’t mean he’s going to beat him on May 4. Golovkin made poor adjustments in both of his fights with Alvarez, and you have to put the blame squarely on the shoulders of his trainer Abel Sanchez for those mistakes. Jacobs won’t make the mistake of staying on the outside, and just jabbing Canelo for most of the fight the way Golovkin did in his first fight with Alvarez. Since the judges didn’t pay much attention to GGG’s jabbing, despite him landing a lot of those shots, it meant that Canelo could win rounds even with just a few good punches landed. Jacobs knows that he can’t beat Canelo by standing on the outside and picking him apart with punches. That might work for Jacobs in beating 99% boxing world, but it probably won’t work in getting him a win over a highly popular fighter like Canelo. He’s going to have to do more to beat Canelo.

“No,” Jacobs said when asked if his only chance of beating Canelo is by knocking him out. “I do feel there’s going to be a lot of pressure on the judges, and we’re going to make note of that, and keep everybody accountable, because we’re going to be going in there and risking out lives and fighting for everything. We want to make sure everybody gets paid for what they do. We want to keep people accountable for judging fights the way they see it, not based on influences from the crowd or influenced from any other source,” Jacobs said.

Jacobs might be making a mistake by not believing that he needs a knockout to win the fight. Future events cast their shadows before. Canelo has been involved in four fights where he could have and arguably have been given losses in his two fights with GGG, Erislandy Lara and Austin Trout. The venue favors Canelo with the fight taking place at the T-Mobile Arena in Las Vegas. This is Canelo’s venue. The crowd will be on Canelo’s side in a major way. Jacobs doesn’t have a fan base in the West Coast of the United States. Jacobs’ fans are in the East Coast in the New York area. If Jacobs makes the mistake of playing it safe the way Golovkin did, hoping that he’ll win a decision, he could be sorry he took that route when the scores are turned in by the judges. This fight that the judges are likely going to score it to the fighter that is more willing to put it on the line. In other words, the risk taker will be the one that gets the win, as long as they land the biggest shots.

“My job is to secure a dominant performance, and make sure there’s no doubt; whether that’s being a boxer-aggressor, whether that’s knocking him out, and whether that’s winning a close fight. He’s a talented guy. I’m going to have to adjust,” Jacobs said about Canelo. “There’s going to be some things I might have to face in there despite his disadvantages. I’m looking forward to it all,” Jacobs said.

Jacobs needs to unload on Canelo with a nonstop flurry of quick shots in the first three rounds the way that Daniel did in his fight with Peter Quillin in 2015. Canelo’s form crumbles when he throws sustained combinations. His power is dramatically weakened when he throws four or five punches in a row, and when he’s fighting in a high paced style. All Jacobs needs to do is study how tired and weak Canelo looked in the final seconds of the first GGG fight, and in the later rounds of the rematch. Canelo was exhausted in both of those fights, and he looked very beatable. Canelo’s punching power disappears in the later rounds. So if Jacobs is still punching with major power, he could blast Canelo out if he hits with a long sustained flurry of shots. 10 to 12 punches in a row from Jacobs will likely product the knockout that he wants and quite possibly needs in order to win the fight.