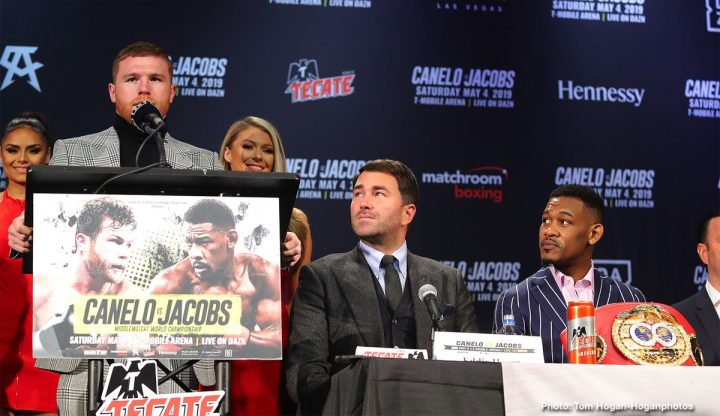 By Mike Smith: Saul Canelo Alvarez (51-1-2, 35 KOs) says he’s more than willing to face Gennady Golovkin in a trilogy fight if he signs on with DAZN, and he’s interested in facing WBO light heavyweight champion Sergey Kovalev in the future at some point.

Canelo met with the media on Wednesday at the New York City press conference for his May 4 unification fight against IBF middleweight champion Daniel Jacobs (35-2, 29 KOs) on DAZN at the T-Mobile Arena in Las Vegas, Nevada. Canelo says he sees the Jacobs and Kovalev fights as challenges for him. Canelo, 28, recently moved up to 168 in his last fight in beating WBO super middleweight champion Rocky Fielding by a third round knockout win.

“We’re happy for a third fight, and look, as I said from the beginning, I’m here to give the fans the biggest and the best fights always willing to continue that,” Canelo said to Fighthype about a trilogy fight against Gennady Golovkin. ”If a third fight happens [with Golovkin], good. If it doesn’t, I will continue our history,” Canelo said.

The only reason the third fight with GGG wouldn’t happen is if the negotiations broke down over money. That’s hard to imagine though. DAZN wouldn’t sign Golovkin (38-1-1, 34 KOs) if they didn’t think it was possible that they could make a fight with Canelo Alvarez.

The Canelo vs. Kovalev fight likely won’t happen. Kovalev is 35-years-old now, and he’s not going to be able to continue to fight at a high level for too much longer without losing his boxing skills. Before Kovalev’s recent rematch with Eleider Alvarez on February 2 of this month, a lot of people though he was done as a fighter. To Kovalev’s credit, he was able to bounce back from his knockout loss to Eleider Alvarez to defeat them in their rematch by a 12 round unanimous decision. But all it takes is a crushing loss for Kovalev for him to be seen as yesterdays news again, and Canelo likely won’t want to fight him under those conditions. That’s why Canelo should face Kovalev now if he’s seriously interested in fighting him. If Canelo waits for any length of time, Kovalev will lose to someone, and be forgotten about. It’s not in Canelo’s best interest to wait until Kovalev is completely shot before fighting him Some boxing fans think that Canelo and Golden Boy Promotions did in waiting until GGG was 35-years-old before they put the fight together with him. Even then, Canelo still arguably lost the first fight with GGG, and was lucky to get a deciion in the second one.

”He’s very difficult,” Canelo said about Jacobs. ”He’s very talented. He uses his legs, combinations, and his speed, but that’s why we took this fight. We took this fight, because we knew it was a difficult challenge. We knew we can win,” Canelo in explaining why he took the Jacobs fight.

Canelo might lose if he’s not better than he was in his last fight against Rocky Fielding on December 15 last year. Canelo looked slower than he’d been in his two fights against GGG, and he was getting hit by Fielding. Canelo did drop Fielding repeatedly to get the knockdown, but he looked very beatable. The loss of speed for Canelo can be attributed to him moving up in weight to super middleweight to challenge Fielding for his WBA 168 lb title.

If Canelo breezes through Jacobs, and if he wins his next fight in September in similar fashion, then it’s possible he could return for a third fight in December. That opponent obviously would be another soft variety opponent like Fielding was. However, if Canelo faces Jacobs and GGG back to back, it’s doubtful that he’ll fight a good opponent in December or if he’ll fight at all, because he’ll likely feel pretty worn down from those two fights. Golovkin is definitely going to apply more pressure from Canelo in the trilogy fight. Golovkin won’t back up under pressure like he id in the second fight, because he knows now the judges won’t give him a decision.