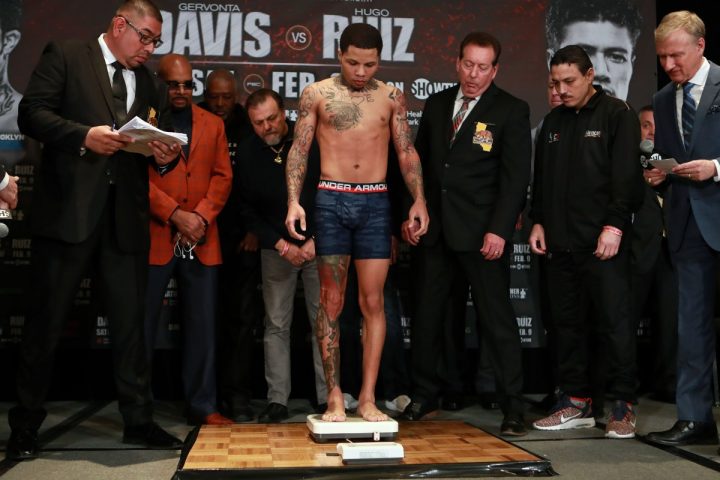 By Mike Smith: WBA Super World super featherweight champion Gervonta ‘Tank’ Davis (20-0, 19 KOs) came in over the weigh-in limit on his first attempt at the scales on Friday for his fight this Saturday night against replacement opponent Hugo Ruiz (39-4, 33 KOs) on SHOWTIME World Championship Boxing. On the second weigh-in attempt, Davis came in at 129.8 lbs. For his part, Ruiz weighed in at 129.5 lbs.

This isn’t the first time that Davis has had problems making weight for one of his fights at super featherweight. Davis lost his International Boxing Federation title title two years ago when he came in two pounds over the limit at 132 lbs for his title defense against Francisco Fonseca in August 2017. Davis was stripped of his IBF title for failing to make weight. He still won the fight easily in stopping Fonseca in the 8th round. Davis says he doesn’t have problems making the 130 lb weight limit for the super featherweight division, but his struggles to make weight today and in his fight against Fonseca would suggest otherwise.

Davis is clearly having problems. Davis is a good fighter, but he needs to be kept busy so that he doesn’t pack on the pounds in between fights eating fast foods. This writer saw Davis being interview recently before he started his training camp for the Ruiz fight, and he was tearing up the food, and it was high carbohydrate type food that puts weight on. If Davis isn’t careful, he going to wind up fighting at welterweight, and he’ll be very undersized for that weight class in terms of his height and reach.

Davis, 24, looked a drained today. You could tell that training camp has been a very hard for him, because he looked flabby and VERY heavy at the first press conference two months ago. Davis has lost a lot of fat. At the kickoff news conference, Davis has a double-chin, and looked like he’d been eating a lot since his last fight against Jesus Cuellar last year in April. It’s expected though for a fighter to gain some weight when they’ve been out of the ring or as long as Davis has. His promoters at Mayweather Promotions haven’t been keeping him busy, so gaining weight is what happens to a fighter.

“It’s kind of expected. He’s missed weight before, so it’s not surprising,” Ruiz said about Davis failing to make weight on his first attempt. “I feel great at this weight of 130 pounds. This is the weight I want to be at. I’d fight every month if I could.”

Davis (20-0, 19 KOs) will be facing the 32-year-old Ruiz at the Dignity Health Sports Park, in Carson, California. Ruiz is replacing Davis’ original opponent former three division world champion Abner Mares, who pulled put of the fight after suffering an eye injury. Ruiz was the best possible available. Ruiz is arguably a step up from the last three opponents Davis has faced against Jesus Marcelo Andres Cuellar, Francisco Fonseca and Liam Walsh. The only guy that stands ahead of Ruiz on Davis’ six-year pro resume is Jose Pedraza. Ruiz is more of a threat to Davis than Pedraza due to his huge punching power, size and hand speed. Pedraza is a light hitter, who boxes and doesn’t sit on his shots. Ruiz is the complete opposite of Pedraza with his emphasis on his punching power.

Mayweather Promotions are trying to turn Gervonta into a pay-per-view star. However, they’re not keeping him busy enough for him to even be someone that brings in good ratings. Floyd Mayweather Jr. can get away with fighting just once a year, but Gervonta can’t do the same thing because he’s not had the years of being busy like Mayweather did earlier in his career. It’s important that Gervonta fight as much as possible the same Mayweather did early on in his career so that he can build up a large fan base of boxing fans.

“I was in New York for the Thurman fight about three weeks ago and got off track a little bit,” Davis said. I was heavy there, but once I got back into the groove and back to training it was fine. I feel fine. Making 130 is not a problem. It’s not a distraction. I feel fine. I’m not dehydrated and my face isn’t sunken. I’ll be ready to go tomorrow.”

Saturday’s Davis vs. Ruiz fight will come down to which of them lands first. The first guy that hurts his opponent in this fight, will likely finish the job. Ruiz is murderous puncher, who is blazing fast and known for getting guys out of there once he’s got them hurt. Davis is more methodical. He can hurt a guy, and then keep him around for a while before finishing them.

In other weigh-in results for Saturday’s fight card on SHOWTIME:

– Erickson Lubin (19-1, 14 KOs) weighed in at 153.75 lbs. for his 10 round fight against former IBF light middleweight champion Ishe Smith (29-10, 12 KOs). The 40-year-old Smith weighed in at 153.75 lbs. This is an important fight for the 23-year-old Lubin, who is trying to come back from his lightning quick 1st round knockout loss to Jermell Charlo in October 2017. That loss seemed to really hurt Lubin’s confidence, as he fought only once in 2018 in beating journeyman Silverio Ortiz by a 4th round knockout last April. Lubin should have fought at least twice in 2018 at the very least. Just fighting once makes you wonder if he’s still haunted from his loss to Charlo. Lubin is still young enough to come back from his loss to Charlo, but he’s not going to do that by fighting only once a year. If Lubin continues to be inactive, he’s not going to progress and improve his game.