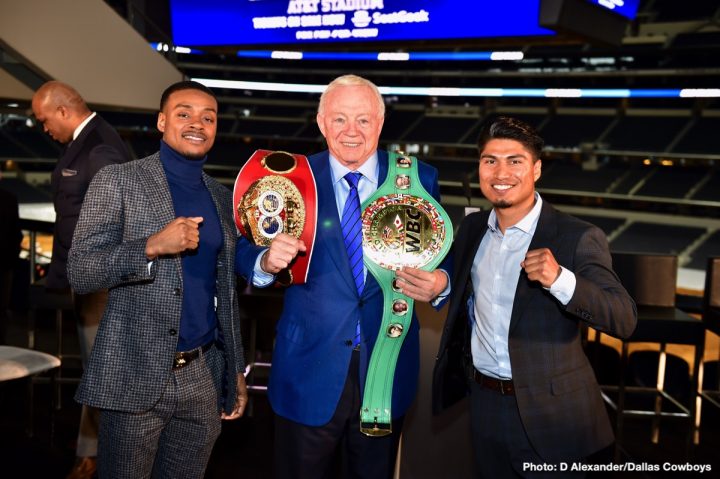 By Dan Ambrose: Mikey Garcia’s bulk training at the SNAC facility still hasn’t helped him get enough size for him to even out the huge height and reach advantage that his opponent IBF welterweight champion Errol Spence Jr. will be enjoying against him when they face each other in 3 1/2 weeks on March 16 on FOX PPV at the AT&T Stadium in Arlington, Texas.

Mikey and Spence met on Tuesday in their press conference in Arlington, Texas. What’s interesting about the news conference was how Spence and Mikey were kept far apart from one another. Even when they had a face off, they weren’t close like normal fighters are. It’s easy to understand why the promoters are keeping Spence and Mikey apart. Spence is so huge in comparison to Mikey. It’s probably a good idea for the organizers of the Spence vs. Garcia fight to keep them as far apart as possible. It was ingenious to have the 6’5″ former heavyweight champion Lennox Lewis put in between Spence and Mikey at the first press conference, because helped disguise Spence’s size advantage. During Tuesday’s news conference in Arlington, Texas, the Dallas Cowboys owner Jerry Jones was put in between the two fighters, and that helped cover up Garcia’s lack of size. Jones is a fairly big guy.

It seemed pretty obvious that Spence and Mikey were being kept apart in order to hide the size disparity between the two fighters. It doesn’t matter that Mikey is a highly successful fighter in his own right, and has accomplished more in boxing than Spence has. The reality is Mikey is fighting in Spence’s weight class, and he doesn’t have anywhere near the same size as him. As former WBO light welterweight champion Chris Algieri said in talking about the Spence vs. Garcia fight, ‘weight classes are made for a reason.’ Garcia doesn’t look like he belongs on the same stage as the much bigger Spence, and come fight not on March 16, he surely won’t belong inside the ring with Errol.

If they put the two guys next to each other, Mikey’s lack of size will make it look like it’s not a fair fight or one to be taken seriously by the boxing fans. There’s nothing that Mikey can do about his lack of size. He’s already trained like crazy at the SNAC facility in San Carlos, California hoping to add size, and it’s not worked for him. He’s still really short, and much too small to have a real chance of beating the Spence, who is almost 5’10”.

“Mikey is very difficult because of how me places his punches,” Spence said. “He’s always thinking and he has a high ring IQ. But I’ve been clicking on all cylinders. I’m strong mentally and physically and prepared for anything he brings to the table.”

Mikey is very good at hurting his opponents with well placed punches. He’s shown that at 126, 130 and 135. However, Mikey’s power hasn’t been the same in his two fights at 140 against Adrien Broner and Sergey Lipinets. He was unable to hurt either of those guys no matter how hard he tried. Mikey did last his punches well against those fighters, but he wasn’t able to hurt them.

“Looking into Mikey’s eyes, I can see how hungry he is and that’s motivating me,” Spence said. “A win here can definitely catapult me and I’m ready to make it happen.”

This is a fight that Garcia, 31, needs to win in the worst way, because it’s his first big fight since his victory over Orlando Salido in 2013. The guys that Mikey has beaten since the Salido fight have been nothing special. He’s beaten fighters that a lot of other contenders would beat as well. These are Mikey’s wins since beating Salido six years ago in 2013: Adrien Broner, Sergey Lipinets, Dejan Zlaticanin, Robert Easter Jr., Elio Rojas, Juan Carlos Burgos, Roman Martinez and Juan Manuel Lopez.

Mikey has never been in a fight before that he expected to lose. This is definitely the first time in Mikey’s career that he’s facing a guy that is expected to defeat him with ease, and knock him out. The other guys that Mikey has been fighting up until now where fighters that came into the fights with him as underdogs. Mikey still hasn’t fought Vasyl Lomachenko, who has been trying to get a fight with him for ages. There’s a lot more to lose for Mikey in getting beaten by someone his own size like the 5’6″ Lomachenko than there is in getting beaten by Spence. Losing to Spence won’t hurt Mikey’s career nearly as much as a defeat at the hands of Lomachenko Mikey would have a ready made excuse to give to the fans if he gets beaten by Spence. He can blame the loss on him moving up two divisions from lightweight to welterweight. The boxing public isn’t going to hold it against Mikey if he gets embarrassed by Spence compared to if Lomachenko does a number on him.

“I’ve been implementing techniques that will help me improve my speed, explosiveness and reaction time, while also adding a little bit of mass,” Mikey said. “I think all of that is going to be beneficial to me on fight night. I feel very happy with the results.”

No matter who Mikey has sparred with, their not going to be able to help him be fully ready for what lies in store for him when he gets in there with Spence. Maybe if Mikey picked out a good junior middleweight as a sparring partner like Jermell Charlo or Jarrett Hurd, he might be prepared somewhat for Spence, but those type of fighters aren’t going to work as sparring partners for Mikey. So he’s obviously had to spar with guys that far less talented than Spence, and not able to match the kind of speed, power and ability that he has going for him. You cant count Mikey’s last fight against the rail thin 5’11” Robert Easter Jr. as someone that can help him get ready for Spence, because he’s nothing like him in terms of size, power and talent. 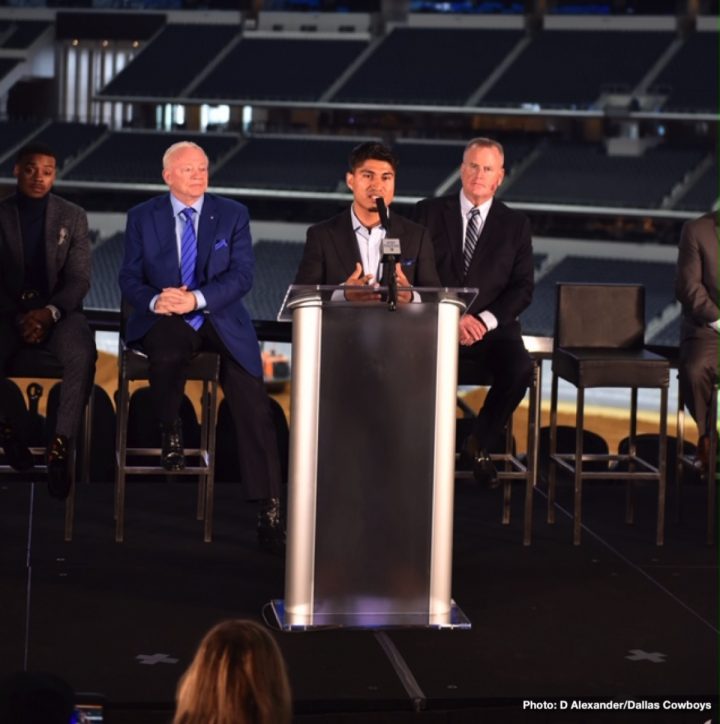 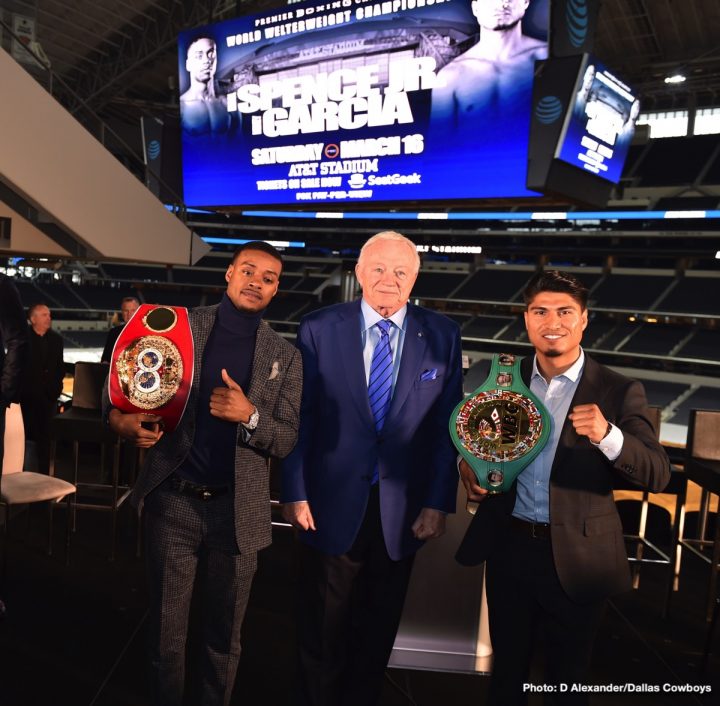 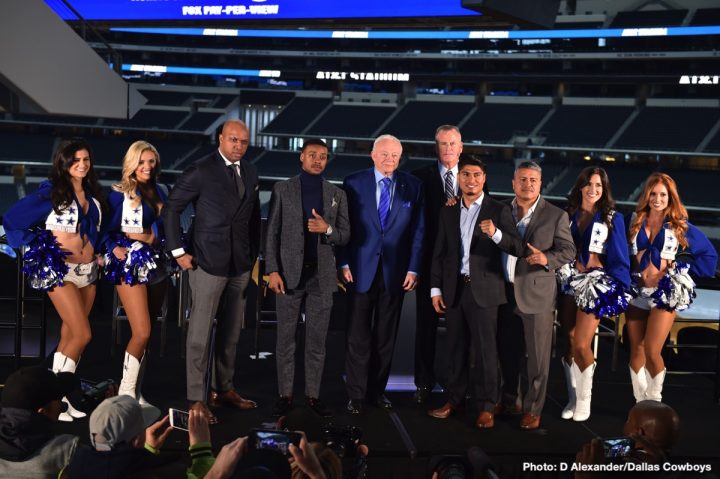 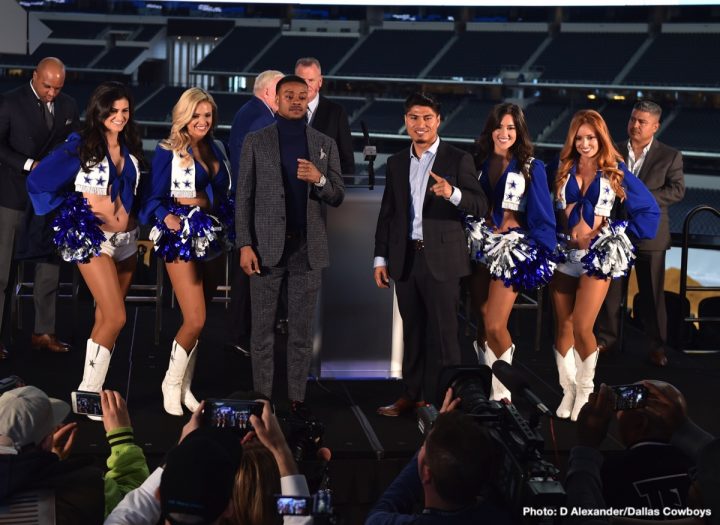 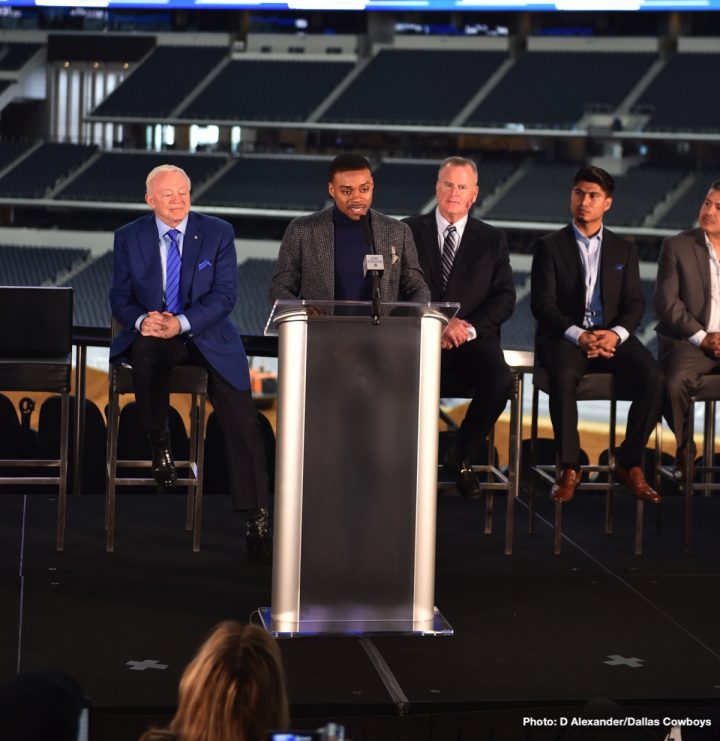 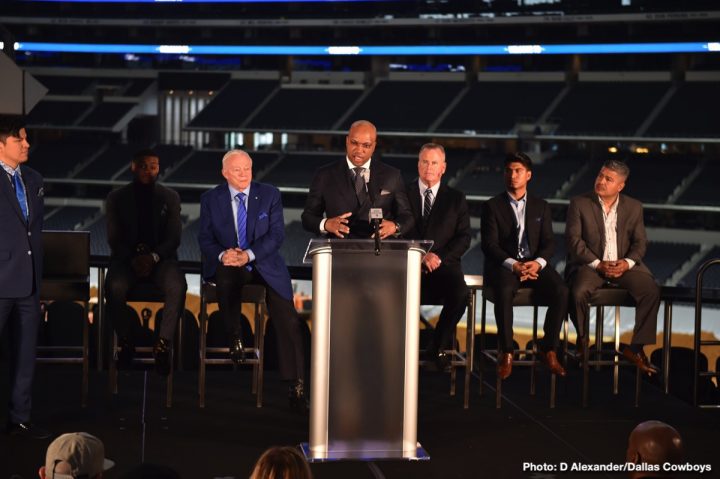 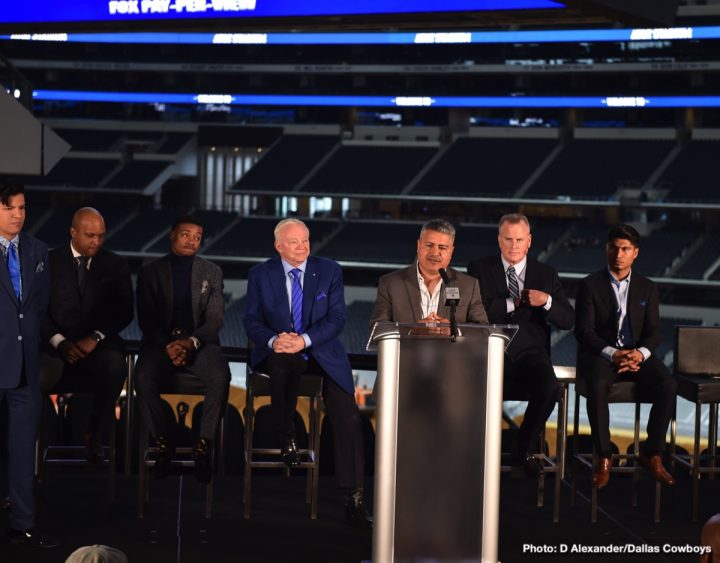 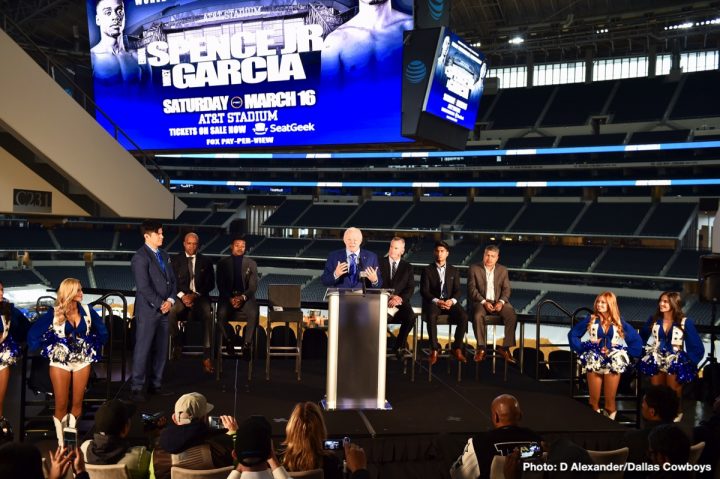