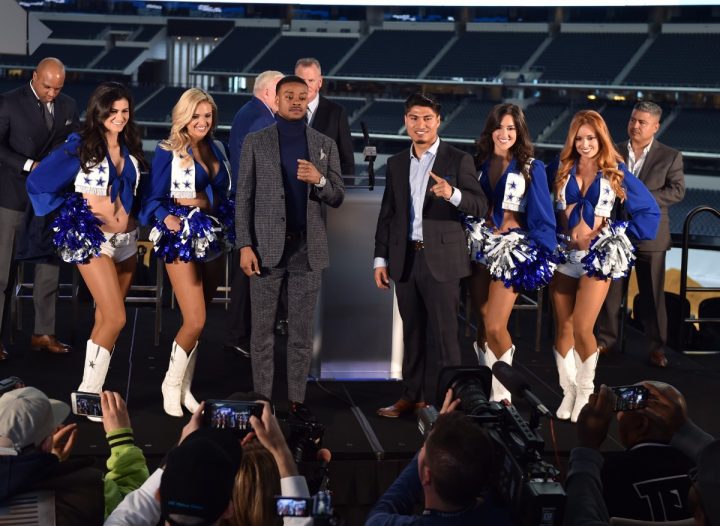 Spence and Garcia were joined by Dallas Cowboys Owner, President and General Manager Jerry Jonesat the same stadium where they will battle for the welterweight title and pound-for-pound supremacy.

Tickets for the March 16 event, which is promoted by TGB Promotions and Ringstar Sports, are on sale now, and can be purchased at SeatGeek.com, the Official Ticketing Provider of AT&T Stadium.

Here is what the press conference participants had to say Tuesday:

“This is a dream come true. This is something that still hasn’t really hit me yet. I try not to get caught up in the moment, but this is my favorite team that I’ve watched since I was sitting on my dad’s lap.

“Every time I see Mikey I get excited and anxious and want to go to the gym and spar. On Sunday, I sparred 18 rounds because of the whole press conference and face off on Saturday. Looking into Mikey’s eyes, I can see how hungry he is and that’s motivating me.

“Mikey is very difficult because of how me places his punches. He’s always thinking and he has a high ring IQ. But I’ve been clicking on all cylinders. I’m strong mentally and physically and prepared for anything he brings to the table. A win here can definitely catapult me and I’m ready to make it happen.

“Any athlete would love to have their home team supporting them. It just so happens I have the most popular team in the world right here in Dallas. It means a lot because they don’t have to do that. I’m very humbled and it feels great to represent Dallas. I always support my people here.

“I’m 100 percent prepared and focused on Mikey Garcia. I’m hungry and I’m already on weight. I can’t wait to put on another show. March 16, you have to make sure you don’t miss it. It’s going to be a legendary night.”

“This fight deserves a home like this. This fight deserves this type of atmosphere and energy. I was a Cowboys fan myself growing up and now I’m here in their home about to have the biggest fight of my career. It’s unbelievable, but here we are. I’m excited to make this a memorable night. This is history in the making.

“I’m very excited for what’s coming in a few weeks. This is a fight that I really wanted and it’s definitely the biggest challenge of my career. To fight the best welterweight in the division is no easy task. Errol Spence Jr. is going to bring the best out of me.

“I’m sure Errol is getting ready for the biggest fight of his career just like I am. That’s what’s going to make this interesting. That’s the recipe for a tremendous fight. It’s not very common to see two of the pound-for-pound best, still undefeated and fighting each other in their prime.

“We’ve been implementing techniques that will help me improve my speed, explosiveness and reaction time, while also adding a little bit of mass. I think all of that is going to be beneficial to me on fight night. I feel very happy with the results.

“I’m very happy to be here. It’s been a really good ride with Errol and myself. This is our 10th year working together and this is a beautiful place for everything to culminate. Mikey is a true fighter and he has a phenomenal trainer in his brother and father. We’re prepared for him and in shape right now. We’re ready to go.”

“We’ve had a great training camp and our sparring partners are doing a great job preparing us for a very tough challenge. By the time the fight comes, you’re going to see what Mikey is all about. Everyone who watches this fight is going to enjoy a great night of boxing.”

“I don’t know if we’ve ever had an event here that has this kind of stature and the combination of two men standing in there on their own, and at the very best stage of their career. This is two champions meeting and that is something very rare for fans.

“These two fighters are uniquely associated with this stadium and the Cowboys. Errol Spence Jr. literally lives next door and is from this particular area. The last night he had at The Star, he had his Cowboys gear on and made our players and myself so proud.

“Our home away from home, Oxnard, California is where Mikey Garcia used to watch the Cowboys practice. We have a lot of kinship with these two fighters and our fans are in for a tremendous treat.

“Errol Spence Jr. vs Mikey Garcia is one of the most intriguing fights of the year. It’s a fight that will determine who is pound-for-pound the best fighter in the world.

“We’re thrilled to be at the home of the best professional franchise in sports, in the Dallas Cowboys. This is the perfect place for this event that features two unbeaten champions in their primes, putting their records on the line. Mikey and Errol are destined to walk out of that tunnel and into that ring to engage in a battle that will never be forgotten.”