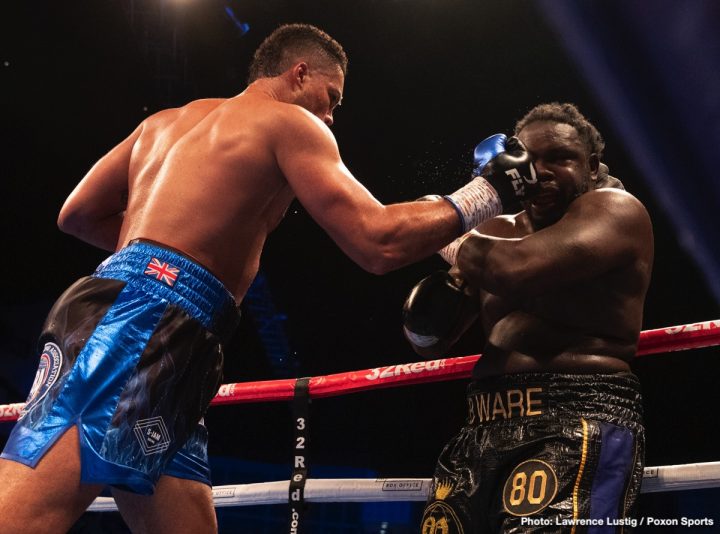 In the 6th, Joyce was hitting Stiverne at will with shots when referee Howard Foster stopped the fight. Stiverne was about to go down, and Foster did the right thing in halting it before he was dropped. The fight was stopped at 2:20 of the sixth. Sanchez says he was the one that picked out Stiverne as Joyce’s opponent, because he feels that he offered the kind of style that he believes will help him in the future prepare for the better heavyweights in the division.

Stiverne looks and fights nothing like the other top heavyweights Anthony Joshua and Deontay Wilder. Those guys are a lot taller than Stiverne, and they’re not fat, slow and inactive. Stiverne would have prepared Joyce for a heavyweight from a different era than the one that he’s currently fighting in. There aren’t any top champions that look and fight like Stiverne.

Although Joyce looked powerful in rolling passed the 40-year-old Stiverne without any problems to earn the World Boxing Association mandatory position, Sanchez says he’s still not ready to take on the best in the best heavyweights in the division. He believes that Joyce, 33, will be ready to take on the best in three to four more fights. That could mean that Joyce will 35-years-old by the time that Sanchez believes he’ll be ready. That doesn’t make a lot of sense, considering that Joyce looks about the same style-wise and performance-wise than the way he was fighting four fights ago last May when he rolled past Lenroy Thomas by a second round knockout.

“It was perfect; exactly what I wanted,” trainer Abel Sanchez said to secondsout about Joyce’s performance against Stiverne. “I said the fight would go six or seven rounds. We needed a guy that was going to show Joe what he’s going to need to deal with on a higher level. Bermane is at the tail end of his career, but very sturdy. We shouldn’t judge him [Stiverne] on one fight. We won’t remember he was a world champion, and he had a lot of great fights before he was stopped by [Deontay] Wilder, but I knew we were going to have a tough challenge tonight. That’s exactly what I wanted. These are the type of situations where you’re going to have to dig deep, because at the next level, three or four fights from now, it’s going to be a lot tougher than this,” Sanchez said.

This fight wasn’t tough at all for Joyce. Yeah, he was getting hit by Stiverne when he was coming in looking to slug, but it was mostly a massacre with Joe hitting the 40-year-old former WBC champion at will with shots. This wasn’t a fight where Joyce was thrown into the deep end and had to “dig deep,” as Sanchez said, in order to win. This was just a big out of shape 273 pound Stiverne, who was too old, too inactive and too heavyweight to keep Joyce off of him. The shots that Stiverne was hitting Joyce with while he was plodding forward would have been potential knockout blows if a more powerful heavyweight was hitting him. Deontay Wilder and Anthony Joshua might have hurt Joyce if they were able to land flush shots on his chin the way that Stiverne was.

“This is like the preamble of it,”Sanchez said in continuing to explain why Stiverne was such a good opponent for Joyce to fight. “This is the beginning of where you have to fight at in the next level. From the beginning, I compared him to George Foreman. George Foreman was that way also [accurate with his punches]. Whatever he threw, he landed. I don’t like to see lumbering heavyweights in my ring. That translated to his hands being active. He’s not the fastest in the world, but you know what? Neither was George Foreman. If we can accomplish half of what he did, we’re going to have a great career,” Sanchez said.

George Foreman was clearly faster than Joyce is now when he was fighting earlier in his career. Foreman weighed only 217 pounds for his first fight with Joe Frazier in 1973. Joyce weighed 265 lbs for his fight last night against Stiverne. Foreman had a better job and uppercut than Joyce. Foreman was a much more complete fighter when he was young than Joyce is right now. The hand speed comparison that Sanchez makes in comparing Joyce to a young Foreman is inaccurate. Foreman was definitely faster.

“There’s a lot of corrections that we need to make,” Sanchez said. “In order to compete with the guys at the top today, it would be impossible. So, three to four fights from now, we’re going to keep working in the gym. This guy is going to produce the kind of results we want. I chose this guy [Stiverne], when they offered him to us, because I felt his style fitted what I was doing in the gym with Joe. The next guy that we choose will be another guy that will help us develop more traits that we’re going to need in the future,” Sanchez said.

Sanchez cant hold Joyce back, because he’s now the mandatory challenger to WBA ‘regular’ champion Manuel Charr. That fight is likely going to be taking place soon. Joyce would have an excellent chance of winning the fight. After Joyce wins the title, he’s going to be dealing with contenders like Trevor Bryan, Fres Oquendo, Oscar Rivas, Dillian Whyte, Sergey Kuzmin and Otto Wallin. Some of those guys would be a real threat to beating Joyce with the way he’s fighting now. Sanchez shouldn’t hold Joyce back from getting fights against Joshua or Wilder, if they’re offered to him, because he might not last long as the WBA ‘regular’ champion once he’s forced to fight one of the good contenders.