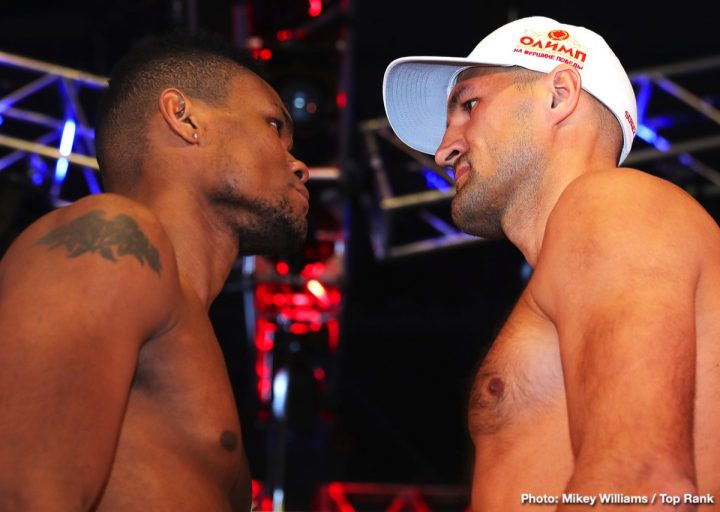 Bradley says Kovalev looked dehydrated for the first fight with Alvarez last September, which he lost by a seventh round knockout, and he thinks that was one of the reasons why the 35-year-old Russian fell apart in the second half of the fight and was knocked out.

Bradley re-watched the Kovalev-Alvarez fight from last September, and he observed that Kovalev easily winning the fight. It wasn’t close. He was dominating until the 7th round when he suddenly came apart. The way that Kovalev fought makes Bradley feel that he’s got the ability to win the rematch tonight.

What Kovalev has going in his favor to beat Alvarez, 34, tonight is how healthy he looked at the weigh-in last Friday. Kovalev didn’t have the dark circles under his eyes, and he didn’t look painfully dehydrated like he’d been for his first fight with Eleider. It was like looking at a different fighter. Kovalev appeared healthier than he was last time he fought Alvarez. Kovalev might have entered training camp for the fight too heavy, and was forced to push hard to take off the weight. Kovalev’s drawn appearance last September suggests that he had too take too much water weight off to make the 175 lb weigh-in limit the day before the fight. Kovalev looked much better during last Friday’s weigh=in.

“Everybody is picking Alvarez,” Bradley said to Fighthype about how the boxing world is overwhelmingly picking Eleider Alvarez to defeat Kovalev tonight in their rematch. “He [Kovalev] was out-boxing him easy. I feel he got overconfident or something, but I’m going with the upset, Kovalev. I think a lot of the bad stuff that has been happening. Something good got to happen,”, Bradley said.

Kovalev was ahead on all three of the judges scorecards going into round seven last time he fought Eleider. Kovalev got caught in the 7th, and dropped three times. Going into that fight, Kovalev had been thinking of fighting unification bouts against the other champions. As good as Alvarez was, he wasn’t viewed as a threat to Kovalev. This was supposed to be another easy win for Kovalev, as Alvarez had been shown to be a limited fighter in struggling to defeat Isaac Chilemba by a controversial 12 round decision in 2015, and not looking good in beating Jean Pascal, Norbert Dabrowski and Robert Berridge. Those fights showed that Alvarez is a fighter that isn’t elite. He’s more of a contender level guy, who took advantage of Kovalev when he was not at his best.

“He knows this could be the end,” Bradley said about Kovalev. “I could be wrong, but that’s where I’m going with. That’s what my gut tells me.”

Bradley sees something in Kovalev that makes him believe he can win the fight. Just looking at the first fight, it’s easy to spot what Bradley is talking about. Alvarez looked completely over-matched. He was getting battered and badly out-boxed by Kovalev. It was a mismatch. There was nothing competitive about the fight until the 7th round when Alvarez hurt Kovalev. Tonight if Kovalev is able to maintain the same form that he showed in the first six rounds of his fight with Alvarez last September, this is going to be an easy fight for him, and he likely will get a stoppage. Alvarez looked badly beaten through the first six rounds. He wouldn’t have been able to take another six rounds of similar punishment without falling apart or having the referee step in and stop the fight.

“I watched that fight. He [Kovalev] was easily winning that fight,” Bradley said of Kovalev’s first fight with Alvarez last September in Atlantic City, New Jersey. “He said he was dehydrated. I could see a little bit of that. I saw his hands drop down by his waist. He said he couldn’t go on. Is that because he’s old and has been in a lot of wars? There’s a lot of miles on him. It could be. At the fighter meeting, he blamed it on himself. He said, ‘It’s my fault.'”

Alvarez isn’t going to take chances against Kovalev in the early portion of the fight. He’ll try and stick with what worked the last time by playing it safe to slowly get to the second half of the fight, and then hope that Kovalev is tired enough for him to jump on him like last time. It’s a risk to fight like that against a puncher like Kovalev, because he can do a lot of damage against a punching bag like Alvarez. Even if Alvarez does make it to the second half of the fight, he might be too punch drunk by that stage for him to rally and score a knockout. Even if Alvarez try and open up with some shots, it’s going to give Kovalev an opportunity to land some of his big shots against the suddenly aggressive Alvarez.

“That could have happened, because when you stop believing in yourself, it’s all downhill from there,” Bradley said about the possibility that Kovalev lost his self confidence after his two losses to Andre ‘SOG’ Ward. “He [Kovalev] said, ‘I believe I’m going to win,’ Bradley said about having asked Kovalev if he thinks he’s going to win tonight against Alvarez.

If Bradley is correct with his prediction of Kovalev winning, he’s going to look like a genius, given that so few boxing fans are picking him to win the rematch.

Kovalev arguably beat Ward in the first fight against him in 2016, but was robbed on the judges’ scorecards. That was not a popular decision. Where Kovalev made a mistake is not having the rematch take place at a neutral venue. Ward won the second fight by an 8th round knockout after appearing to hit Kovalev with three consecutive low blows. There was no reason for Kovalev to be discouraged after the fight. His stamina was good, but he wasn’t going to be able to take three low blows in a row. There’s not too many fighters that could handle something like that.

If Kovalev beats Alvarez tonight, then he’ll have proven to the boxing fans that his previous loss was because he wasn’t at his best physically. The fans will have to agree with him. Right now, the fans just see Kovalev as a guy that makes excuses after he loses, and isn’t able to admit when he’s been beaten by the better man.