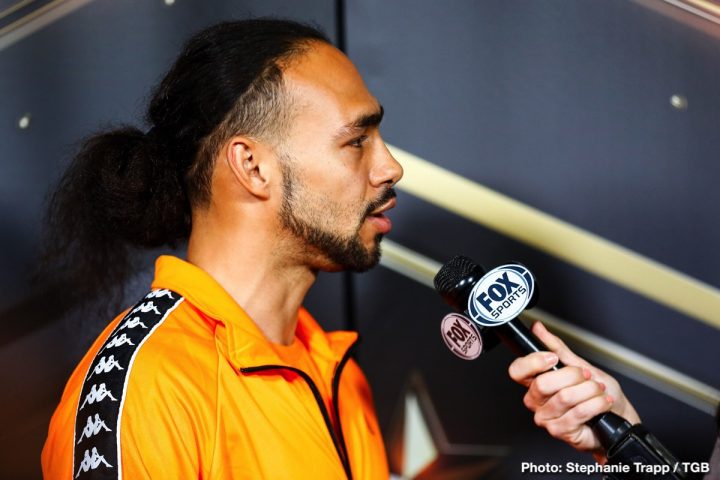 For Thurman to unify the welterweight division, he needs to fight IBF champion Errol Spence, WBC champ Shawn Porter and WBO champion Terence Crawford. Fighting anyone else won’t lead Thurman to accomplishing his goal of unifying the division. With Thurman’s chronic injuries, he needs to be making every fight count for the remainder of his career. Thurman is 30-years-old now, but the way his body keeps breaking down on him, he’s like a 40-year-old.

Thurman, 30, wants to deliver a better fight to the fans for his next bout after he beats the 34-year-old Lopez, who he compares to Swiss cheese due to the many holes he has in his game.

Pacquiao, 40, successfully defended his WBA ‘regular’ welterweight title last Saturday night in beating Adrien Broner in Las Vegas, Nevada. Pacquiao wants to fight Floyd Mayweather Jr. next, but if not him, then he’s got the options to face the Errol Spence Jr. vs. Mikey Garcia winner or perhaps Thurman or WBC champion Shawn Porter. Spence, Mikey or Thurman would be the ideal opponents for Pacquiao to pick from in order to get the most interest from boxing fans. Pacquiao is waiting to hear whether Mayweather will come out of retirement to fight him. Mayweather is technically retired, but still fighting MMA guys in boxing spectacles.

“Pacquiao can be on the table. I would love to see it on the table,” Thurman said in discussing his next opponent after his fight with Lopez this Saturday. “I never got Floyd Mayweather. Manny Pacquiao is the last living legend in the sport of boxing. He’s done many things. To have him a part of my legacy would be a dream come true. With or without Manny Pacquiao, we will be trying to do our best to give you a better fight later on this year,” Thurman said.

Not choosing to fight an elite level opponent like Errol Spence Jr. or Terence Crawford hurts Thurman’s ability to get someone like Pacquiao to want to fight him. Thurman is doing a lot of bragging about his talent, but the fact of the matter is he hasn’t fought in a long time and he doesn’t have a lot of victories over top notch guys during his 12-year pro career for him to be doing the kind of bragging that he’s been doing this week. Thurman’s best career wins have come against these fighters:

The only talented fighters among those guys are Danny Garcia and Shawn Porter. Thurman barely edged both of them. By no means did Thurman dominate Porter and Garcia. Thurman’s wins over them were close decision victories.

Thurman’s fight against Josesito Lopez will need to create a lot of buzz from the boxing world on Saturday night for him to have a shot of getting Pacquiao. The Filipino star is going to want to fight someone that will help create a lot of interest in a pay-per-view match, and Thurman might not be able to do that because he hasn’t fought in such a long time. Lopez is more of a journeyman at this point in his career than one of the top fighters.

“I don’t know where his confidence is coming from. When you put me on the battle field, I go to war,” Thurman said about his fight this Saturday night against Josesito Lopez on Premier Boxing Champions on FOX. “It’s always my job to do my best, win, lose or draw. Y’all are going to have something to say about it. Someone is going to say, ‘All he did was knockout Josesito Lopez.’ If you stop a guy in five seconds, they still got something to say about it. If it’s 10 seconds, it’s already too long,” Thurman complained about how he won’t get credit from the boxing public after he beats Lopez.

What did Thurman expect from the fans when he chose to fight Josesito Lopez instead of one of the more well-respected fighters in the welterweight division. Lopez is a fighter that past his prime Andre Berto knocked out in six rounds in March 2015. Lopez was blown out by Marcos Maidana and Saul Canelo Alvarez in back to back fights in 2012 and 2013. Jessie Vargas beat Lopez in September 2011 by a 10 round split decision.

“You struggle to get to where I’m at, and then you struggle to stay on top,” Thurman said. “In this performance [against Josesito Lopez], we want to showcase all my skills and talent, and remind people, that this is ‘One Time,’ and I am a devastating puncher. At this level too, some people can take a devastating punch. It’s going to be fun. It’s been a long time for me. I’m going to have fun in there. I’m taking people out of their confidence many times. I’ve got a lot of people that show up to my job to watch me. I can find so many avenues to win. I know he’s a good fighter, but the boy is like Swiss cheese. He’s got holes throughout. It’s only a matter of me finding a few of them, and exposing them as soon as possible, round by round until the fight is over,” Thurman said.

If Thurman wins too easy, he’s going to take criticism from boxing fans for fighting Berto, Maidana, Canelo and Vargas’ leftovers. It’s understandable that Thurman is taking a tune-up level opponent. Thurman has been out of the ring for two years since his win over Danny Garcia in March 2017, but with the way he’s talking, you would think that he’s facing Mayweather on Saturday night instead of a glorified journeyman. Thurman isn’t a devastating puncher like he says. He can punch a little, but he’s not a one-punch knockout artist by any stretch of the imagination. Thurman would be a better knockout puncher if he stayed in the pocket when fighting instead of him backing away from his opponents when they attempt to exchange with him. Thurman fights like he doesn’t posses the punch resistance to take the shots from his opponents.

“The odds are in my favor,” Thurman said about his fight against Lopez. “I’m undefeated. I don’t think there’s ever been a fight where I the odds weren’t in my favor to this day. Most people don’t like to bet against ‘One Time.’ Even Danny Garcia, a multiple world champion, undefeated in his own right, they still had me edging him out,” Thurman said.

The odds are obviously going to be in Thurman’s favor this Saturday, because he’s facing a tune-up level opponent in 34-year-old Lopez. If Thurman doesn’t want the odds to be in his favor, then he needs to step it up against Spence, Crawford, Saul Canelo Alvarez, Gennady Golovkin, Jarrett Hurd or Jermell Charlo. If Thurman fights those guys, then the odds probably won’t be in his favor, and he can find out what it feels like to have the boxing fans picking against him for once. Thurman talks like he’s not fully aware of the soft match-making he’s benefited from for most of his career. When the best two guys that you’ve fought during your career is Danny Garcia and Shawn Porter, that tells you that you’re not fighting the best. Porter and Garcia are good B-level fighters, but they’re not up there with the A-level guys like Spence and Crawford, and perhaps neither is Thurman. 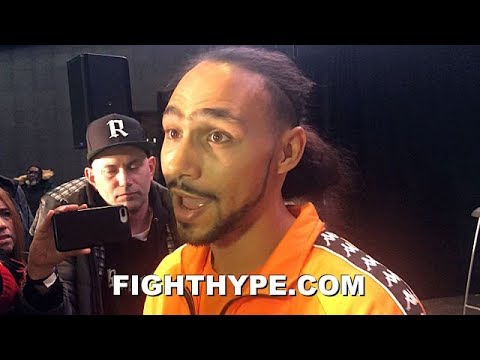 
« Kell Brook has a couple of options in U.S for next fight