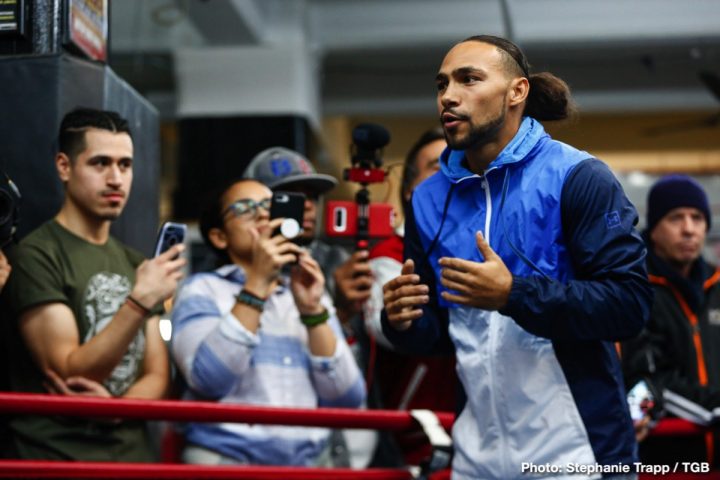 By Dan Ambrose: Keith ‘One Time’ Thurman (28-0, 22 KOs) wants to assure Errol Spence (24-0, 21 KOs) that they will be facing each other in the future, but right now he has “priorities” with his tune-up fight against Josesito Lopez (37-7, 19 KOs) this Saturday night, and whatever fight comes after that.

Thurman, 30, says he hasn’t forgotten about Spence. The two of them will face each other at some point. Spence has been waiting for a fight against Thurman for five years since 2014, and he’s seemingly run out of patience with the fighter that some boxing fans have started calling, “Run Time.”

Thurman will be emerging from a two-year layoff to defend against Lopez on Saturday night on Premier Boxing Champions on FOX at the e Barclays Center in Brooklyn, New York.

“We will fight, it’s not going nowhere. But I got here before you, pimp. It’s called priorities,” Thurman said via Michael Benson. “I’m definitely interested in a big unification fight with Errol Spence Jr…I can’t wait to get in there and scrap it out. It doesn’t matter how many years ago that I said it, but from that day to this day, it’s a true statement.”

It sounds like Thurman is making excuses for not fighting Spence by talking about having “priorities” that are holding him back. Thurman could be fighting Spence now, and he could fight him in his next fight date if he wanted to. Spence has been patient in waiting for a fight against Thurman. By the time the two fighters do face each other, the fight might be passed it’s sell by date. Thurman is only 30, but with the way he’s suffering injuries, he’s like an old fighter that can’t be relied on to stay healthy.

When you tell another fighter five years ago that you want to fight him, and yet still haven’t years down the road, people stop believing in what you say. Thurman should have fought Spence a long, long time ago instead of wasting time fighting the likes of Robert Guerrero, Luis Collazo, Danny Garcia, Julio Diaz, and Shawn Porter. The boxing public wants to see Thurman test himself against Spence. The fact that he hasn’t has resulted in Spence taking over the #1 spot in the welterweight division. He’s taken that spot without a fight with Thurman, because he’s not stayed healthy and he’s not fighting the quality guys that he needs to in order to stay on top.

You can argue that Thurman’s problems with injuries in the last five years makes him someone that might not hold up for an entire training camp leading up to an important fight. It appears that Thurman will make it to his fight with Josesito Lopez this Saturday, but you never know whether he’ll suffer an injury and will need to bow out for future fights. Thurman wants fights against Manny Pacquiao and Floyd Mayweather Jr., but his injury issues has keep him out of the ring for such a long time since his last fight that it doesn’t make sense for popular fighters like Pacquiao and Mayweather to fight him. Besides the risk of Thurman going down at any time with a new injury, he’s not popular as he should be given his inactivity.

“He’s the ‘regular’ champ, I’m super. I love Manny Pacquiao,” Thurman said. “My ranking, my ‘0’ and my accomplishments haven’t gone anywhere. I’ve been out of sight and out of mind for a little, but I’m back now. You can’t block a star from shining. We’re in the galaxy and shining bright.”

Thurman has been blocking himself due to his injury related problems. No one is blocking Thurman. He’s doing a fine job of blocking his own success by going down with injuries, and staying on the shelf for eons.

Munguia being groomed for Canelo fight »