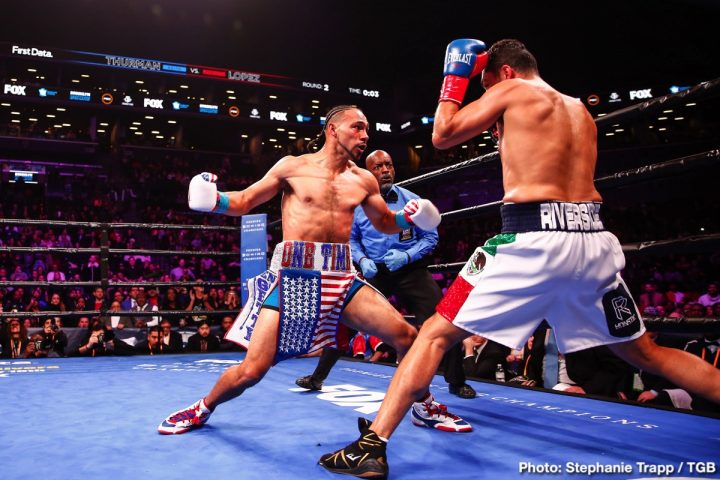 By Sean Jones: WBA Super World welterweight champion Keith Thurman says he spoke to Golden Boy Promotions about setting up a fight between him and Saul Canelo Alvarez, and he was told that they didn’t want to make the fight at this time. Thurman (28-0, 22 KOs) says he’s been wanting to fight Canelo ever since he started fighting in the U.S, but he keeps moving up in weight. Never the less, Thurman says he’ll use movement to out-box Canelo (51-1-2, 35 KOs) if the two of them ever since face each other.

With Canelo now fighting at middleweight, and under contract with DAZN for the next five years, it would seem improbable that he and Thurman will ever mix it up unless one of them is willing to cross the pond to fight on a rival network. Thurman is with Premier Boxing Champions, and fights on FOX, FS1 and SHOWTIME.

“‘Canelo vs. Thurman.’ Ooh, you talking now,” Thurman said on social media. “Man, I wanted that boy the day he stepped on U.S soil. I looked at Golden Boy and said, ‘Can I get that? Can I get that?’ He said, ‘That’s a fight, but not right now.’ Ever since then, he [Canelo] keeps moving up in weight, and he took steroids, and he talked about, ‘It’s meat.’ Do you know how much money you got, boy? You ain’t eating that cheap ass meat, boy. You eating that good-good. Stop lying,” Thurman said.

Thurman would have to move up in weight to middleweight for a fight between him and Canelo to have any real chance taking place. Canelo would be the A-side in the negotiations. It’s not likely that Canelo would volunteer to come down to 154 or 152 to accommodate Thurman the way he did with Floyd Mayweather Jr. in 2013. Mayweather was the A-side in that fight, and Canelo was just the youngster starting out his career. Canelo wasn’t nearly as popular back then compared to now. Thurman would have to move up in weight the same way Mikey Garcia is moving up from lightweight to take on Errol Spence Jr. at welterweight. If Thurman is good with fighting at middleweight, and if he’s able to fight on DAZN, then maybe Golden Boy Promotions could give the green light in the near future for Canelo to fight him. Golden Boy is soon going to run out of viable opposition for Canelo to fight on DAZN. Once that happens, Golden Boy will be stuck matching Canelo against the no name contenders at 160, and they’re going to need someone like ‘One Time’ to fight him.

“He couldn’t crush Floyd Mayweather, and Mayweather didn’t even move a lot,” Thurman said about Canelo’s fight with Mayweather in 2013. “He moved a little. I’m not saying Canelo can’t knock me out. I would never say that. He’s a devastating puncher. He’s hurt a lot of men. I’m saying if I stick and move, I win the fight,” Thurman said.

Thurman isn’t willing to stand and fight Canelo in the pocket the way Mayweather did in beating him six years ago. That’s disappointing. But what Thurman might not realize is that he’s not going to likely win a decision by sticking and moving against Canelo for 12 rounds. Gennady Golovkin and Erislandy Lara both showed that you don’t win decisions against a popular fighter like Canelo by dominating him on the outside in Las Vegas, which is where Golden Boy Promotions will likely insist the fight take place. Thurman will have to stand and fight Canelo if he ants to have a chance of beating him by a decision. Thurman doesn’t do well when he stands in the pocket. We saw what Danny Garcia and Shawn Porter was doing to Thurman when he stood in the pocket for a brief time against them.

“‘When are you going to knock the overrated Spence out,” Thurman was asked on social media. Thurman then replied, “2020, boy. We going to make it happen.”

It sounds like there might an elbow injury coming up for Thurman with the way he’s talking about Spence. Thurman has shown no interest in fighting Spence for all these years. When the topic switched from Canelo to Spence, Thurman suddenly stopped trash talking and got a serous look on his face. That’s a fight that Thurman can’t continue to avoid for too much longer, because he’s in the same division as Spence. This isn’t a situation where he’s got a fighter two divisions above him in middleweight Canelo Alvarez. Spence fights at welterweight, and he’s a world champion. Thurman has to fight Spence in a unification fight if he ants to be taken seriously as being one of the best fighters in the 147 lb weight class. If Thurman suffers another injury that causes him to miss another two years of his career, then there’s no point in him talking about wanting to fight Spence. Thurman will have been out of commission for too long for him to be a serious option for Spence. 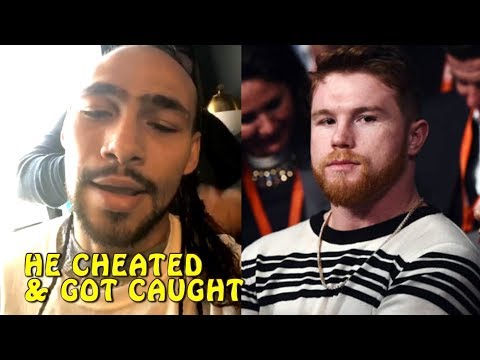