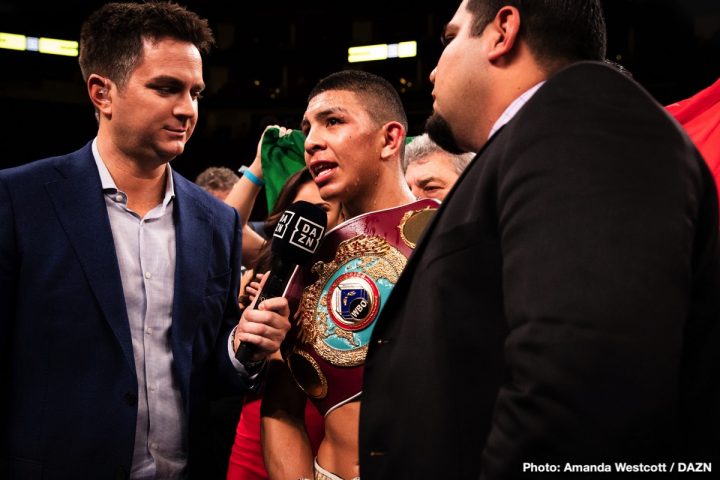 By Dan Ambrose: WBO junior middleweight champion Jaime Munguia (32-0, 26 KOs) had a tougher time than expected last Saturday night in beating Takeshi Inoue (13-1-1, 7 KOs) by a 12 round unanimous decision at the Toyota Center in Houston, Texas.

The fight showed that the 22-year-old Munguia is a work in progress, and has a lot of improvement he needs to make in his game before he’s ready to face the elite at junior middleweight or middleweight.

The 22-year-old Munguia went into the fight with Inoue being seen as a future star, but he didn’t perform like one. Munguia fought like a guy that shouldn’t be a world champion.

Golden Boy and Zanfer Promotions need to consider slowing up Munguia’s career until he can improve enough to mix it up with the better fighters.

After the fight, Munguia didn’t give Takeshi much credit for having fought so well. About the only thing Munguia could say is Inoue took a lot of punishment that would have knocked out most fighters. That’s not exactly a compliment from Munguia, but he probably was having a hard time coming to terms with how badly he struggled against the Japanese fighter.

“I was surprised by his ability to take punches,” Munguia said. “He took a lot of punches to the head and to the body. He took punches that would have dropped anyone else.

It would have sounded a lot better if Munguia had paid Inoue respect by pointing out that the scores handed down by the three judges were atrociously bad, and that he deserved three to four rounds at least.

The referee Mark Calo-oy played a part in the fight, as he was breaking the action when Inoue was getting the better of Munguia on the inside. Much of the time, there was absolutely no reason for the referee to break the fighters. He seemed to pull them apart when Inoue was unloading on Munguia, who didn’t have a clue what to do on the inside. Munguia fought like this was the first time in his life that he had to deal with an inside fighter, and he had no answers whatsoever. Some boxing fans have compared Munguia to a young Saul Canelo Alvarez, but he’s nothing like him at all. Canelo has always been able to fight on the inside, and he has faster hands. Munguia is a lot bigger than Canelo, and has a better jab, but he can’t fight on the inside and he doesn’t move his head and torso at all like him.

“It was a great fight. He was a great warrior,” said Munguia. “It was a great battle for me. I feel I got a lot of experience from this fight. I will keep working on using my distance. There were times where he was able to cut the distance, and I want to work on that.”

Munguia used movement to try and keep Inoue from closing the distance. Munguia was mostly running from one side of the ring to the other, and then stopping against the ropes to try and fight off Inoue. One quarter of the time, Munguia would grab Inoue in a clinch to keep him from throwing punches. Often times when Munguia wouldn’t clinch, the referee would pull Inoue off of him, and it looked very strange. There was no reason for the referee to pull Inoue off of Munguia. It gave the appearance that Munguia was being helped out. Munguia was also complaining a lot about getting hit in the back of the head by Inoue. But in the next instance, Munguia would clobber Inoue with shots to the back of the head, and not receive warnings for it. Both fighters were fighting dirty. It wasn’t just Inoue. Munguia was throwing low blows, and hitting Inoue with rabbit punches all night long, and not getting warned or penalized for it.

After the fight, Munguia let DAZN know that he’s thinking about moving up to middleweight after two of three more fights at 154. Munguia shouldn’t move up to middleweight until after he faces Jarrett Hurd, Erislandy Lara, Jermell Charlo, Tony Harrison or Kell Brook. Munguia needs to fight the lions at 154 before he moves up in weight Munguia’s next fight is supposed to be against Dennis Hogan, who isn’t as talented as the top guys at junior middleweight. Munguia would have problems trying to beat some of the contenders like Austin Trout, Erickson Lubin, Julian ‘J-Rock’ Williams, Kell Brook and Maciej Sulecki.

Before last Saturday, Golden Boy Promotions CEO Oscar De La Hoya had said that he would like to match Munguia against Saul Canelo Alvarez in the future. That would be a bad idea. Canelo would likely KO Munguia if he fought like he did last night. The same with Gennady Golovkin and Daniel Jacobs. If Munguia is going to move up to middleweight in the near future, he needs to be brought along slowly before he faces one of those guys.

None of the Golden Boy Promotions head honchos addressed the subject of Munguia’s lack of boxing skills after the fight. It would be a good idea for Munguia to dump his trainer, and find someone that can teach him to move his head, and fix some of his other problems. Munguia needs someone that has time, and that isn’t overloaded with other fighters or giving countless time consuming interviews while in the gym. Some of these trainers are so busy eating and giving interviews while at the gym, you have to wonder how much training they’re actually doing.

At this point, Munguia doesn’t look like he’s prepared to mix it up with the better fighters. He has a ton of hype behind him, but the reality seems to be much different. A good fighter like Jarrett Hurd would have massacred a limited guy like Takeshi Inoue last night. The fact that Munguia had so many problems with Inoue showed that he’s not ready for the big time. It would almost be better for Golden Boy to have Munguia vacate his WBO title when the time comes in the future for the World Boxing Organization to order him to fight a good contender instead of the guys he’s been facing.

What we saw last night was a middleweight [Munguia] beating up on a true welterweight in Inoue. Munguia looked like he weighed at lest 175 lbs last Saturday night against a fighter that should be fighting at welterweight. Inoue doesn’t appear to be one of those guys that want to dehydrate 20 lbs just so he can fight at welterweight and enjoy a big weight advantage over his light opponents. So instead of doing what other fighters do in melting down to make weight at 147, Inoue fights at 154, which is closer to his natural weight. If fighters fought at their true weight classes instead of gaming the system, you wouldn’t have these huge guys competing in divisions that their bodies aren’t designed for.

Munguia-Inoue was one of the most exciting fights on DAZN this year. In terms of entertainment value, it was a top notch fight, and easily the best on the entire card. You don’t get much better than Munguia vs. Inoue, but that was because it was evenly matched.