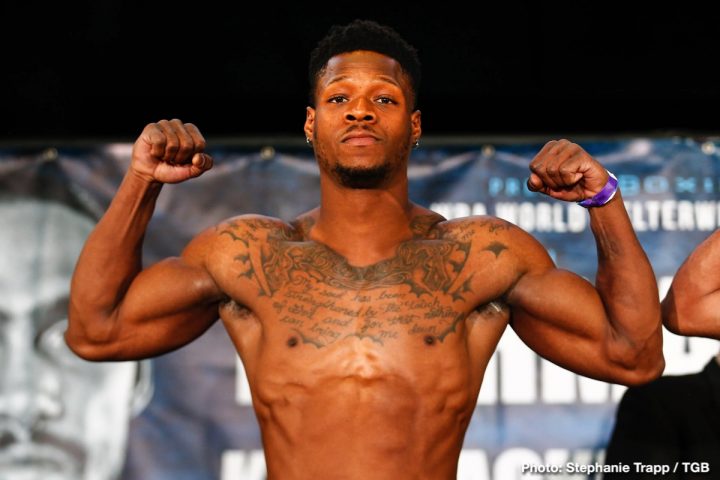 By Jim Dower: In a big upset last Saturday night, cruiserweight journeyman William Deets (7-12, 3 KOs) stopped Marsellos Wilder (3-1, 2 KOs), the younger brother of WBC heavyweight champion Deontay ‘Bronze Bomber’ Wilder, in the fourth round on the undercard of Keith ‘One Time’ Thurman vs. Josesito Lopez on Premier Boxing Champions on FOX and FS1 at the Barclays Center in Brooklyn, New York.

Marsellos Wilder was having his way with the 33-year-old Deets, trying to knock him out when suddenly he was hit hard by the journeyman and dropped. Wilder, 29, wasn’t ready for the big shot from Deets, and he was badly hurt, and couldn’t make it back to his feet to resume fighting. As hurt as Wilder was, he would have been knocked down again if he had gotten up. The referee then stopped the fight at 2:35 of round four. At the time of the stoppage, Wilder was well ahead in the fight having easily controlled the first three rounds.

Deontay Wilder was there to see his brother lose the fight. It had to have been a tough pill to swallow for Deontay to watch his brother Marsellos absorb a bad loss like that. Marsellos, like his brother Deontay, didn’t have the amateur background to prepare him for the pro game. Marcellos turned pro last year at age 28. That’s an advanced age for a fighter to turn pro. Fighters with an extensive amateur background do well in turning pro late, but not guys that don’t have experience.

All Deets did to beat Wilder was put simple pressure on him, and he eventually broke in the fourth round. Although Deets has a lot of career losses on his record, he hadn’t been knocked out in 12 years since 2007. Deets had suffered decision losses over the last 10 years, but he hadn’t been knocked out. What that meant for Wilder is that he was going to have to win this fight by a decision if he was going to get the victory, but unfortunately for him, he couldn’t take the power of Deets.

There’s no word yet whether Wilder’s management will look to put together a rematch with Deets. This is situation were Wilder almost has to fight Deets again in order to move forward with his career. Marsellos can’t walk away from the defeat and treat it like it’s nothing. He has to try and avenge the loss.

Marsellos Wilder was supposed to be back in the ring next month on the undercard of James DeGale vs. Chris Eubank Jr. at the on February 23 at the O2 Arena in London, England. Given Wilder’s knockout loss to Deets, it’s unlikely he’ll be back inside the ring to compete on the DeGale-Eubank Jr. undercard. Wilder should take some time off before he returns to the ring to possibly try and avenge the loss to Deets. There’s risk for Wilder in fighting Deets again though, as if he loses that fight, it’s hard to know where he goes from there. Getting beaten twice by a journeyman with a 7-12 record like Deets has would be really to come back from.