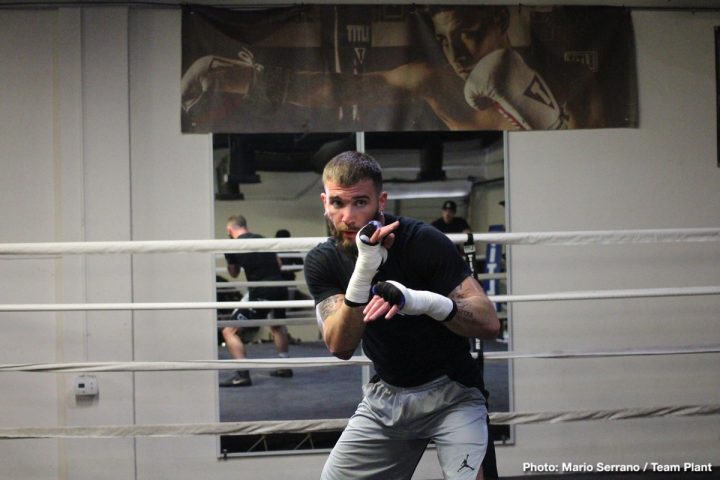 By Jeff Aranow: IBF World super middleweight champion Jose Uzcategui (28-2, 23 KOs) will be making his first defense of his title in less than two weeks against undefeated #2 IBF Caleb Plant (17-0, 10 KOs) on Sunday, January 13 at the Microsoft Theater, in Los Angeles. This is the first title challenge for the 26-year-old Plant, who a lot of boxing fans are high on.

Uzcategui vs. Plant will be televised on Premier Boxing Champions on FS1 and FOX Deportes. The televised portion of the card begins at 8:00 p.m. ET / 5:00 p.m. PT.

This is going to be a tough challenge for Plant, as he’s facing a boxer/puncher in 28-year-old Uzcategui. Plant showed in his last fight against Rogelio Medina that he could neutralize his huge punching power by boxing him for 12 rounds, but that was 11 months ago, and was against a slower fighter than the one that he’ll be facing on January 13 against Uzcategui. Plant dominated Medina in beating him by a one-sided 12 round unanimous decision by the scores 120-108, 119-109 and 117-111. It could be a different story when Plant gets inside the ring with the taller 6’2″ Uzcategui, who will have a one inch height along with a two inch reach advantage over him. Plant hasn’t been fighting too many taller fighters lately, so it’s going to be interesting to see how well he does against Uzcategui. Plant will be giving away not only height and reach, but also a great deal in the power department.

Plant has quickly emerged as one of the top fighters i the 168 pound division since turning pro five years ago in 2014. Unlike a lot of fighters, Plant didn’t have an extensive amateur background before turning pro. He fought in the Golden Gloves in 2011 and 2013, and he was an Olympic team alternate in 2012, but he didn’t fight in the Olympics and didn’t do a lot. Since turning pro, Plant has looked great in beating Rogelio ‘Porky’ Medina, Juan De Angel, Thomas Awimbono, Andrew Hernandez, Carlos Galvan and Adasat Rodriguez.

“I’m going to bring excitement. Everyone who’s watched me sees my boxing skill, the speed, the footwork, but we have some new additions that we’ll throw in there for this fight,” Plant said. “Everyone needs to tune in January 13 to see what it looks like.”

The Uzcategui vs. Plant fight comes down to these areas:

– Power: Uzcategui has a big advantage in the power department. Plant isn’t a puncher. He’s a pure boxer, who tries to out-box and out-slick his opponents. One of the faster, slicker fighters i the 168 lb weight division Andre Dirrell wasn’t able to get the better of Uzcategui despite having the speed and boxing skills advantage over him. Uzcategui stalked Dirrell around the ring until he quit in the 8th round last year in March. Plant doesn’t possess Dirrell’s hand or foot speed nor his defensive ability. If Plant can’t keep Uzcategui off of him, then he’s going to get beaten on January 13.

– Experience: – Uzcategui has a slight edge in this area due to him having fought Andre Dirrell twice, Matt Korobov, Julius Jackson and Rogelio Medina. The only name that Plant has on his resume is Medina, who Uzcategui already beat five years ago in 2013.

– Ring IQ: Plant has a boxing brain, and is able to get a lot out of the limited physical tools that he was born with. Plant isn’t fast, powerful or huge, and yet he makes the most of what talent he has. With that said, Plant still hasn’t faced an A-level fighter during his career, so it’s unclear how he’ll do against Uzcategui and the other top fighters in the super middleweight division. It’s time that Plant step it up with his career, because he’s got to show now whether he has the talent to beat the best at 168. He can’t spend his entire career fighting guys like Medina, Zoltan Sera and Tyrone Brunson. Few boxing fans see Plant as being in the same league talent-wise as Callum Smith, Saul Canelo Alvarez or David Benavidez, but that doesn’t matter. If Plant can get a hold of the International Boxing Federation title that Uzcategui now possesses, he might be able to have a nice little run in holding down the belt if all he wants to do is defend it against the contenders in the IBF’s top 15 rankings. As long as Plant stays away from Canelo, Benavidez and Callum Smith, he should be alright.

– Speed: Plant has a little more hand speed that Uzcategui, but not by much. He’s not that fast. Plant wins by fighting smart, using his jab, and staying out of harm’s way in his fights. He’s not going to be able to use his speed to do much. The only way Plant wins this fight is by using his jab, and staying out of the way of Uzcategui’s big shots.

– Mobility: Plant has the advantage in mobility, but not a huge advantage. Uzcategui is pretty light on his feet, and quite capable of cutting off the ring on Plant or any fighter that chooses to use movement to try and evade him. Plant will try and stay on the move the entire fight, but it’s not going to help him win. If he can’t stand in the pocket and get the better of Uzcategui, then he’s going to come up empty in this fight. Plant might initially try and stand and fight Uzcategui, but once he tastes some of his punching power, he’s going to back off and look to steal rounds by pecking away at the Venezuelan fighter with jabs and single pot shots. Those aren’t going to be enough to impress the judges. Andre Dirrell was landing a lot of shots on Uzcategui, but he was still losing rounds due to the punching power of the IBF champion. To beat the champion, Plant can’t run around the ring looking to spoil his way to a victory. He’s got to stand and try and beat the champion on his own terms. Plant isn’t that type of guy. He’s going to try and win rounds by being slick, and that’s not something that he depend on to beat the guys with a lot of punching power like Uzcategui, David Benavidez and Callum Smith.

– Punch resistance: This an even area. Neither guy has shown a weakness in the chin area.

– Heart: Uzcategui has shown the ability come back when getting out-boxed against Dirrell. You have to give Uzcategui a lot of respect for showing heart and not giving up in those two fights.

“I really think that with our styles, this is going to be fireworks. I believe that on January 13 you will hear ‘and the new!'” Plant said.

Plant needs to make sure he stays off the ropes the entire fight. That’s the mistake that Dirrell made against Uzcategui, and it cost him. Uzcategui does extremely well he traps his opponents against the ropes and pummels that with power shots.

The only fight of Uzcategui’s career where he was dominated was in his match against Matt Korobov in 2014. The Russian southpaw Korobov had far too much skills for Uzcategui at that point in his career, and it he ended up getting dominated by him in a 10 round loss.

Plant is a good fighter, but he’s running into a huge talent in Uzcategui at the wrong time. After his two fights with Dirrell and his match against Korobov, Uzcategui now has the seasoning that he needed to beat most if not all of the fighters in the super middleweight division. Plant is a good talent, but he’s not shown the type of ability that suggests that he’ll be able to beat a guy like Uzcategui. Plant will try hard to win on January 13, but Uzcategui will have too much power, pressure and size for him to deal with. I see Uzcategui stopping Plant in the 8th round in a competitive fight.