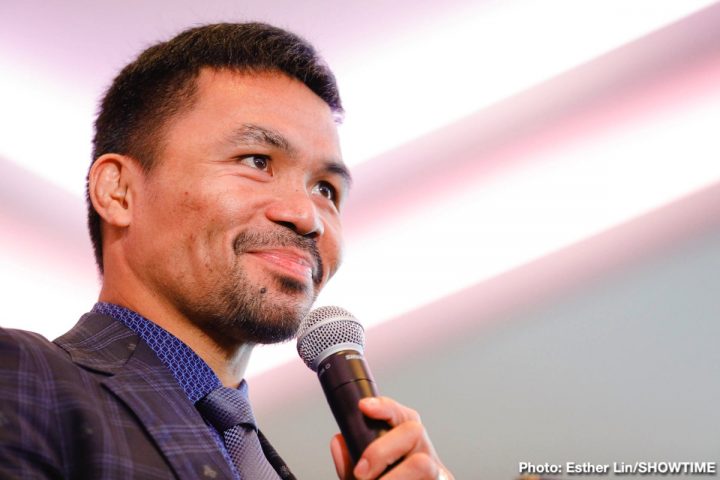 By Mike Smith: Manny Pacquiao took to Twitter to send out a message shortly after Floyd Mayweather demolished the hapless young 20-year-old Japanese kick boxing star Tenshin Nasukawa last Month night on December 31 in Saitaima, Japan. The post by WBA ‘regular’ welterweight champion Pacquiao (60-7-2, 39 KOs) on social media seemed like he was taking a shot at the 41-year-old Mayweather by saying that his New Year’s resolution is to face guys his own size or bigger.

Pacquiao said this on his Twitter following Mayweather’s first round wipeout of the 20-year-old Tenshin Nasukawa last Monday night on December 31 in Saitama, Japana:

“Here is an early New Year’s resolution. To continue to only fight experienced opponents who are my size or bigger. @PBC @TGBPromotions @SHOSports @ShowtimeBoxing @MGMGrandGarden @AXS #PacquiaoBroner.”

If this was Pacquiao’s effort at trying to shame Mayweather, it’s doubtful that it worked. Mayweather doesn’t seem to care what boxing and MMA fans think of him. As long as he’s making money by fighting MMA guys that the fans want to see him fight, it doesn’t matter what the fans say about him. Blame it on the fans that are willing to pay to see Mayweather fight inexperienced fighters in fights that are farces. As long as people are willing to pay to see Mayweather fight MMA guys, he’ll continue to do it.

If you look at the bright side, at least Mayweather isn’t fighting golfers, tennis players, NBA players or bowlers. Mayweather is at least fighting guys that compete in the combat sports. These guys are willing to come over to boxing to face Mayweather in the squared circle. Obviously, they would likely prefer it f the fights were conducted under the MMA rules, but Mayweather is the A-side, so he can dictate the rules of the fights.

Mayweather’s win over Nasukawa won’t count on his professional record, unlike his last fight against UFC fighter Conor McGregor. The Nevada State Athletic Commission sanctioned the Mayweather-McGregor fight as a pro fight for boxing, even though McGregor was making his pro debut. It was a great way for Mayweather to break Rocky Marciano’s 49-0 record by fighting a guy with a 0-0 record. It’ll be interesting in the future if there’s going to be an asterisk next to Mayweather’s record in the record books to show that he beat Marciano’s record by fighting an MMA fighter that had never fought before in a boxing ring. Mayweather did his job of destroying Tenshin in the first round to show the boxing and MMA fans tht the young fighter wasn’t in the same class as him, but in so doing, it made Floyd look bad because he was facing someone that wasn’t in the same class as him.

Mayweather’s win over Tenshin doesn’t mean he’s going to return to the ring to fight boxers. Mayweather (50-0, 27 KOs) is still retired. His fight with Tenshin was an exhibition, and that’s all it was. If Mayweather does come back to boxing, it’s going to be against someone that he feels the fans want to see him fight. Mayweather was willing to accept just a $9 million payday against Nasukawa suggests that he’s no longer insisting on getting a nine figure payday for his fights. That makes things easier for when he does decide to come back. There aren’t too many boxers that Mayweather can fight where he’s going to get $100 million+ payday without him risking his neck in the process. Saul Canelo Alvarez is probably the only guy that Mayweather can get that kind of money fighting.

“Tenshin hold your head up high, I want the fans to support him, he’s a great guy, a great fighter and great champion,” said Mayweather in talking about Tenshin after the fight.

Nasukawa looked like he was crying afterwards. It was hard to watch the guy. He was pretty broken up after the fight. Nasukawa had ideas of beating Mayweather, but he never got a chance to do anything. Mayweather hurt Tenshin with a big right hand in the earliest moments of the fight that put him down on the canvas, and he never seemed to recover from that blow. When Nasukawa got to his feet, he looked dazed, and not focused. His eyes were open, but they looked blank. It was obvious that Nasukawa was going o get knocked out unless he grabbed Mayweather to tie him up to keep him from geting his shots off.

Had Nasukawa broke the rules and used his MMA moves, he would have reportedly been given a $5 million fine. With that kind of fine, it wouldn’t have been worth it for Nasukawa to try anything out of bounds. However, as big and as powerful as Mayweather looked in comparison to the small 5’5″ Tenshin, it probably wouldn’t have mattered very much if the Japanese fighter came out fast throwing nothing but kicks. Mayweather had the reach on him, and he would have gotten close enough at some point to land one of his sweeping shots to knock him out.

It’s anyway’s guess which MMA fighter that Mayweather will fight next. Before he chose to face Nasukawa, Mayweather was interested in facing UFC lightweight champion Khabib Nurmagomedov in a boxing match. Khabib is one of the biggest stars today in the UFC, and it would have created a lot of interest if Mayweather could have fought him in a boxing match. However, UFC president Dana White ruled out a fight between Khabib and Mayweather unless it involved MMA rules. Mayweather obviously wasn’t going to make a fight with Khabib in the octagon under MMA rules, so the fight never happened, and likely never will. There are too many other MMA fighters that Mayweather can fight inside a boxing ring without him needing to worry about dealing with MMA tactics.