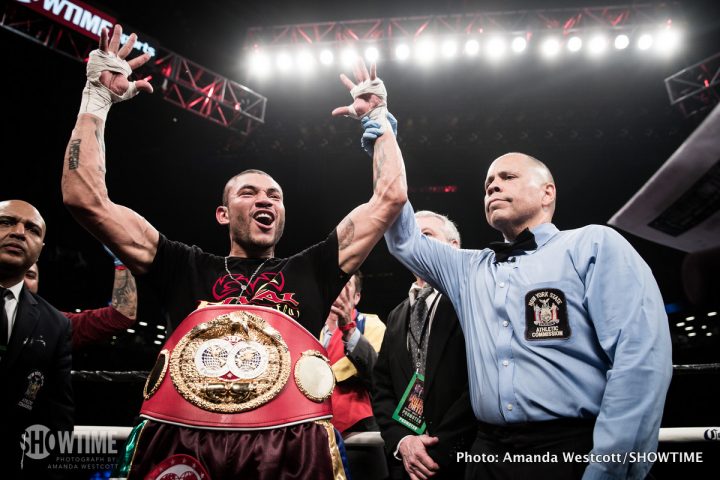 By Mike Smith: IBF super middleweight champion Jose Uzcategui (28-2, 23 KOs) is totally focused on his opponent underdog Caleb Plant (17-0, 10 KOs) for this Sunday at the Microsoft Theater, in Angeles, California. Uzcategui wants to beat Plant, and then move on to bigger and better things against the other champions at 168.

Uzcategui isn’t overlooking Plant, as he knows that this is a tough opponent, who recently beat former world title challenger Rogelio ‘Porky’ Medina by a one-sided 12 round unanimous decision last February.

It’s been 11 months since Plant last fought though, and he’s wasted an entire year of his career doing nothing. Coming off of a long break to fight a talent like Uzcategui is not a good idea. That’s a recipe for failure, but Plant has to take the fight because he’s ranked #1 by the International Boxing Federation at 168. If Plant didn’t take the fight, then someone else would, and he would likely see himself dropped in the rankings.

With fights being frequently televised on Premier Boxing Champions on FOX & FS1, Plant, 26, has quickly picked up a lot of fans without even facing anyone of note. The fans like Plant’s slick style of fighting, and don’t mind that he has very little punching power. Never the less, Plant is still the underdog against Uzcategui, and it’s going to be difficult for him to win this fight unless he can do something out of the ordinary.

“I’m 100 percent focused on Caleb Plant, but my New Year’s resolution is to unify the 168-pound division,” said Uzcategui. “When I’m not working on that goal, I just want to spend as much time with my family as possible.”

Although Plant has a lot of hype behind him due to all the air time he’s been given on PBC broadcasts, he’s still very much up against in in facing a talented fighter like Uzcategui. It’s a bad match-up for Plant, because the 6’2″ Uzategui is bigger, stronger, more mobile and the better technician. Uzcategui does everything better than Plant does, which means that this fight could very quickly get out of hand on Sunday. Plant might win rounds based on his popularity, but it’s going to be tough for him to win a decision due to his lack of power. Uzcategui has a way of making the rounds easy to score due to his heavy hands, and his pressure style of fighting. Unless the judges are asleep at the wheel on January 13, they should have an easy time scoring the fight.

“I have to get that strap and then we’ll move on to bigger and better things. Outside of the ring it would be to get a house, then just go from there,” Plant said.

It’s going to require a better effort from Plant for him to beat Uzcategui than what we’ve seen of him in the past. Plant does not look nearly good enough to defeat a fighter as talented as Uzcategui.

In the co-feature bout, super bantamweight contender Brandon Figueroa will be taking on Moises Flores.

David Benavidez vs. J’Leon Love on Spence-Garcia undercard on March.16 »