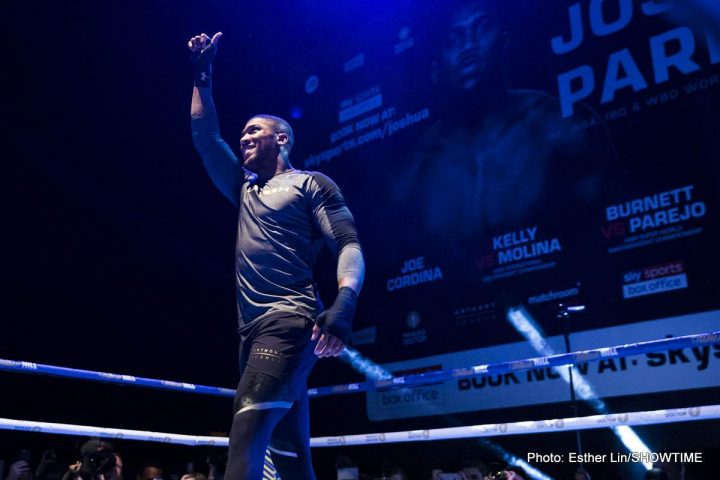 By Scott Gilfoid: Anthony Joshua’s promoter Eddie Hearn is expecting a decision to be made by next week about AJ’s next fight, which will be against one of these fighters: Jarrell ‘Big Baby’ Miller, Dillian Whyte, Tyson Fury or Deontay Wilder. According to Hearn, there’s a possibility that Joshua (22-0, 21 KOs) could be defending his IBF/IBO/WBA/WBO heavyweight titles against ‘Big Baby’ Miller (23-0-1, 20 KOs) next in June on DAZN in New York.

Hearn is looking to put Joshua in with a flawed heavyweight in Miller in hopes of making him popular in the U.S without putting him in a risky fight against Deontay Wilder. It’s a well-thought out move on Hearn’s part in wanting Joshua to become popular in the States the easy way without working for it. It’s disappointing to see Hearn swerving Wilder, which is a fighter that would make Joshua popular if he beat him, and instead going after an easy target in Miller.

If Joshua fights Miller next in New York at Madison Square Garden, it’s going to invite a great deal of criticism to AJ and Hearn, as they both want nothing to do with fighting Wilder in the United States. Joshua will come to the U.S to fight the slow moving, weak-punching Miller, but not to face the hard thrower Wilder. That tells you a little about how Hearn and Joshua think. Risk takers, they are not.

“I’ve got [Deontay] Wilder, who basically doesn’t want to talk to us about an AJ fight, so he doesn’t want to fight AJ,” Hearn said to IFL TV. “If we can’t get [Tyson] Fury; he doesn’t want 60-40. Dillian Whyte doesn’t want what he’s been offered, then we’re probably going to fight [Jarrell ‘Big Baby’] Miller. But I believe for Anthony Joshua’s career, to fill up Madison Square Garden, and to defend his world heavyweight titles against an American, a New Yorker, in his backyard, in front of 22,000 people, is a major statement in his career,” Hearn said.

Miller is more of a blue collar type of fighter, who wins his fights by throwing a lot of shots to beat the lesser guys that his promoters have been putting him in with. Hearn says a win over Miller will be a “major statement in his career,” but that sounds more than a warped view on his part. Beating Miller might make waves with the casual boxing fans in the UK, but not in the U.S. The casual fans likely won’t have any interest in subscribing to see this oddity/mismatch.

To get the American casual boxing fans to subscribe to DAZN to see a fighter like Joshua, who isn’t popular, fight another obscure heavyweight in Miller, it’s asking too much of them. Hearn can’t turn Joshua into a star in the U.S on the cheap by putting him in with the 315 lb Miller. Hearn is wily, but he’s misjudged the American boxing fans if he thinks they’re going to want to subscribe to DAZN just so they can see a non-popular foreign champion in Joshua take on an overweight, slow guy in Jarrell Miller. Hearn needs to put Joshua in with Wilder if he wants to “make a statement” in the U.S, because Miller is not going to do it.

“I know it’s not Wilder, and it’s not Fury,” Hearn said in pointing out that Jarrell Miller lacks the popularity that Wilder and Fury both possess. “Yeah, of course [Miller was given an offer for the Joshua fight]. Everybody has been offered money. You’re fighting an absolute beast [Joshua] for the heavyweight world championship,” Hearn said.

Joshua isn’t a beast. He was almost knocked out by 41-year-old Wladimir Klitschko two years ago. Joshua is built like a body builder, but he’s not a devastating knockout guy like fighters from the past. Joshua isn’t a KO artist like a young George Foreman, Mike Tyson, Lennox Lewis, Rocky Marciano or even Larry Holmes. Joshua was hurt by Alexander Povetkin and Carlos Takam. Joshua’s recent fight against Joseph Parker was seen as a very strange fight where the referee kept the two fighters apart the entire fight, which helped Joshua.

“It’s just like when you fight Canelo [Alvarez],” Hearn said in explaining why Wilder, Fury, Dillian Whyte and Miller should be willing to accept less money to fight Joshua than what they arguably should be getting. “At what point are you going to say, ‘Okay, I’ve got a shot at a world title.’ If you’re a challenger, and you’ve been offered a shot at a heavyweight world title for multi-million pounds, at what point do you say, ‘Alright, maybe I’m not happy with the deal, but I’m getting a shot at four heavyweight championship belts.’ I go back to, I know Charles Martin is not Joshua, but Joshua took peanuts to fight Charles Martin, because he believed he could beat him to become the heavyweight world champion, and it would take him to a place where it eventually led to,” Hearn said.

Hearn sounds like he’s trying hard to reason why Joshua’s opponents should be willing to accept less than what they feel is a fair deal for them to fight him. Hearn points out that Joshua took the smaller money to fight former International Boxing Federation heavyweight champion Charles Martin in April 2016 for his belt. But what Hearn isn’t saying is that Martin was a flawed fighter, who Joshua had a great chance of beating, especially with him traveling to the UK to defend his belt. Just because Joshua was willing to take the smaller money in a fight was a sure thing for him, it doesn’t mean that Wilder, Fury and Whyte should be willing to take the smaller money as well. Those guys know what value they bring to the table for the fight against Joshua, so naturally they’re going to ask for a 50-50 deal or close to that. We don’t know what Whyte wants for a fight against Joshua. You would have to believe it’s close to the 60-40 offer that Hearn gave to Wilder and Fury. It would be nice to see what Hearn is offering Whyte. It wouldn’t be surprising if it’s a 65-35 split or even a 60-40 deal.

“Yeah, definitely,” Hearn said when asked if he needs to know who Joshua will be fighting next for April or June by the end of January. “I’d like to know by the end of next week. We need to know what’s happening by next week. People have made it very clear. Wilder is petrified of Anthony Joshua. Fury wants 50-50. It ain’t happening. Dillian Whyte will take the fight. He should take the fight. He’s been given an improved offer, yeah, but he should take this fight in my opinion,” Hearn said.

With Hearn wanting to know who Joshua’s next opponent is by next week, that pretty much rules out Fury and Wilder being the one that he faces next. It could be Whyte if he likes the sweetened offer. Given how bad Whyte looked against Dereck Chisora in their rematch last month on December 22, it would be wise for him to agree to a deal to fight Joshua. Whyte doesn’t look like he’s going to be able to hold on for too much longer before he gets beaten again. For Whyte’s sake, he needs to fight Joshua before he gets beaten again, because he might have lost to Chisora last month if not for the referee that kept taking points away from Dereck for fouling. Whyte looked like he was there to be beaten before the second point deduction in the fight in round eleven.

« Pacquiao is just as powerful as before says Roy Jones Jr.