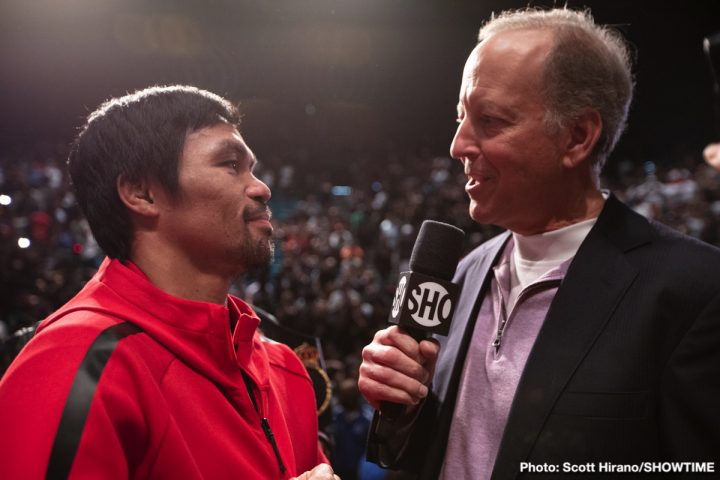 A rematch between the two superstars would likely see both get a nine-figure payday. Mayweather hasn’t made the kind of money since his fight against UFC star Conor McGregor in 2017. Mayweather’s recent boxing match against Japanese kick-boxer Tenshin Nasukawa saw him receive a $9 million for the three-round exhibition match.

Mayweather stopped Tenshin in the first round. Mayweather didn’t look as sharp as he was in his last true boxing match against Andre Berto in 2015, but he didn’t need to because he was facing a novice with a 0-0 record.

The money is the key for Mayweather to come back to fight Pacquiao. Without there being a massive amount of money available, Mayweather, 41, likely won’t bother coming back. He’s got too good of a thing fighting MMA guys in boxing matches for him to risk his unbeaten 50-0 record fighting a true boxer like Pacquiao. With that said, Pacquiao could hurt his chances for a Mayweather fight if he looks too good tonight in beating Broner.

Mayweather and Pacquiao staging their rematch on September 14, which takes place just two days before the Mexican holiday Cinco de Mayo, could cause friction with popular Golden Boy Promotions star Saul Canelo Alvarez, who has been fighting frequently on that holiday weekend for his PPV fights. If Mayweather faces Pacquiao in a pay-per-view bout, they might have competition on the same night with Alvarez if he chooses to face Gennady Golovkin in a trilogy fight on the same night on September 14.

“It’s boxing. Anybody can have their day inside the squared circle,” Zab Judah said to Fighthype in talking about the rumors of a rematch between Mayweather and Pacquiao for September. “We’ve seen a lot of funny things happening inside the ring. Can Manny come back? Yeah, Manny can come back. Manny can be beat. Floyd can be beat, win lose or draw. But Floyd has been on a roll for such a long time. He figured out the blueprint in how to put himself in a different situation, in a different category. Like I keep telling everybody, ‘Stop hating, and start congratulating that Mayweather found a way to put himself in a category that other people can’t see.”

Pacquiao had an injured shoulder when he fought Mayweather in 2015 in losing a 12 round decision. Pacquiao believes that the fight would have a different outcome in the rematch with him healthy, and no longer dealing with a shoulder issue.

Pacquiao’s trainer Freddie Roach thinks that he’s a better fighter now in terms of punching power than he ever was. Pacquiao is 40-years-old now. It’s hard to believe that he’s punching with more power now than he was in the past.

“His [Pacquiao] power is better now than it ever was,” Roach said to Fighthype. “I’d like Manny to be impressive [against Broner]. Every time someone says, ‘knockout’ to him, he smiles. I know why he wants it as bad as we do. In his last fight, he got a knockout for the first time in a long time,” Roach said about Pacquiao’s knockout win over Lucas Matthysse last July. “He wants that feeling.”

Mayweather might have lost too much from his game for him to beat Pacquiao in the rematch. The Mayweather that we saw in his last two fights against Tenshin and McGregor would be too slow for Pacquiao. Mayweather will know himself what chances he has in beating Pacquiao. Mayweather won’t take the fight unless he absolutely feels that he needs the money. Some boxing fans feel that Mayweather is burning through his fortune at a rapid pace with the constant purchase of high ticket items like expensive jewelry and cars. Both of those things don’t hold value the way real estate does. Mayweather could end up broke if he gambles and burns through his fabulous fortune with his purchases. That’s why it might be a good idea for Mayweather to take the fight with Pacquiao while he’s still a world champion, and while there’s still a lot of interest from the boxing fans. The money that Mayweather makes against Pacquiao in the rematch may keep him living the lifestyle that he’s been.

Pacquiao looked powerful against Matthysse, but he didn’t look especially powerful in his fights against Jeff Horn, Jessie Vargas or Tim Bradley. Those are Pacquiao’s last four opponents. We’ll see tonight if the power that Pacquiao showed against Matthysse was a temporary thing or something that will last.

“I feel like I’m in my late 20s. The way I work hard, the way I move, it’s still the same, nothing’s changed,” Pacquiao said to TMZ. “Of course, it’s different. It’s very big difference when you’re healthy or not healthy.”

Pacquiao didn’t move a lot in his fight against Matthysse. He was bombing the Argentinian fighter with power shots the entire fight before scoring a stoppage in the sixth.