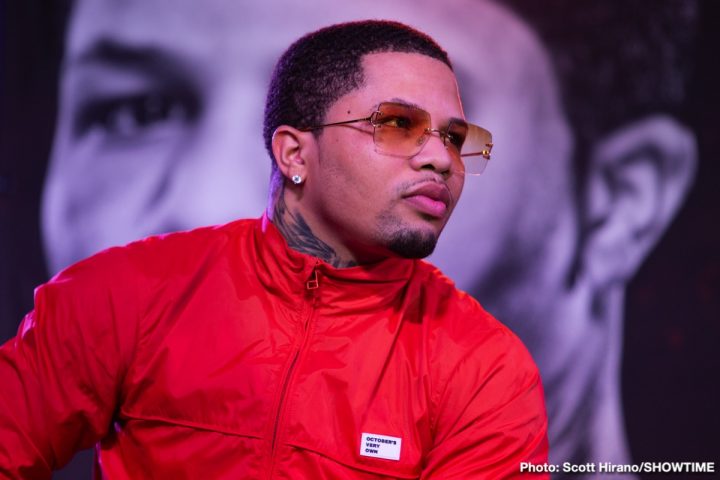 By Chris Williams: Gervonta ‘Tank’ Davis (20-0, 19 KOs) looks like he means business in preparing for his fight against former 3 division world champion Abner Mares (31-3-1, 15 KOs) on February 9 on SHOWTIME Championship Boxing at the Dignity Health Sports Park, in Carson, California.

Davis is going to be fighting three times in 2019, starting with his title defense against Mares. Davis is expected to move up to lightweight this year, and go after Vasyl Lomachenko, if Top Rank let’s him fight him. Adding Lomachenko’s name to his resume will shoot Davis to the top of the sport. Lomachenko is rated #1 pound-for-pound, but that could change overnight after he faces Tank Davis.

Mares, 33, is a very good fighter, but he’s running into a runaway freight train right now in 24-year-old Tank Davis, and there’s not stopping him with the way he’s been looking. Even Vasyl Lomachenko might be little more than a speed bump for Gervonta with the way he’s fighting.

Top Rank promoter Bob Arum, who recently compared Lomachenko to Muhammad Ali, would do well to keep him away from Gervonta right now. It’s one thing bragging about your fighter by lumping him in the same category as Ali, and it’s another thing actually matching him against the best to have him prove it. Ali walked his talk during his career. Lomachenko might not want to try the same if it means mixing it with Gervonta.

There’s a month to go before Davis faces Mares, and he’s already looking in great shape for the fight. Mares is going to need to come up with some kind of plan that help minimize the punching power of Davis, because he could end up like Jesus Cuellar if he can’t stop him. Davis didn’t even take notice of Cuellar’s efforts to slow him. He walked right through Cuellar, dropping him three times in the process of knocking him out in round three. There were some boxing fans that believed that Cuellar would give Gervonta a good fight. Boy were they wrong!

“In 2019, I want to make a big statement not only in the ring but by letting the boxing world know that I’m the next star.” Gervonta said. “I’m aiming to headline a pay-per-view by 2020 if everything goes right. I have great fights lined up for next year, without looking past Abner.”

Davis has got to make sure he doesn’t miss weight for the fight. Davis missing weight will give Mares an excuse if he loses. Mares has already got an excuse that he can use if he gets beaten by pointing out that he was moving up to super featherweight from the 126 pound division to take the fight. But if Davis fails to make the 130 lb weight limit for the fight, it will give Mares’ supporters an excuse for when/if things don’t work out well for him.

Gervonta, who comes from Baltimore, Maryland, wanted to make sure that he took the fight with Mares where he lives in Southern California, and that’s why the fight is taking place in Carson, California rather than Las Vegas, Nevada or another location.

If everything goes as Gervonta plans in 2019, he’ll be on his way to moving over to pay-per-view in 2020. Things can move that quickly with Gervonta’s career if he can dismantle Lomachenko, and beat Mikey Garcia as well. Beating Lomachenko and Garcia would take Gervonta to the top. It’s too bad Terence Crawford moved up to welterweight. A fight between him and Tank would be an excellent one at a catch-weight of 137 or 138.