By Dan Ambrose: Oscar De La Hoya says he told Golden Boy Promotions Eric Gomez to stop the negotiations for a trilogy fight between former middleweight champion Gennady ‘GGG’ Golovkin and Saul Canelo Alvarez due to slow movement in the talks. De La Hoya didn’t like the way the negotiations were going, so he had Gomez stop negotiating with GGG, and instead put together a fight between Alvarez (51-1-2, 35 KOs) and International Boxing Federation middleweight champion Daniel Jacobs (35-2, 29 KOs) for May 4 on DAZN.

De La Hoya says he was quite pleased how quickly the Canelo-Jacobs fight was put together. Some of the hardcore boxing fans don’t mind seeing Canelo fight Jacobs, but the casual fans were hoping to see a third Canelo-GGG fight on May 4, and they likely won’t be as motivated to see this fight.

“When I told [Golden Boy Promotions president] Eric Gomez, ‘forget about GGG; they’re taking their sweet time. Let’s move on. That fight will happen maybe sometime in the future,” De La Hoya said to Fighthype in talking about why the negotiations for the trilogy fight between Canelo and Golovkin fizzled out recently.

Golden Boy isn’t done with Golovkin as a future opponent for Canelo. Although it seems clear that De La Hoya has given GGG a lower priority for the time being, he’s going to need to make that fight, even if he doesn’t want to. Canelo has a big $365 million contract that he received by DAZN, and there aren’t any fighters at middleweight that come close to having the same popularity as Golovkin. Jacobs is a good fighter, but he’s not highly popular. He hasn’t been able to make that leap. His fighting style is often defenisve, and he struggles when he faces better opposition. If Canelo gets past Jacobs, he’ll be looking at these guys in the middleweight division: Billy Joe Saunders, Demetrius Andrade, Jermall Charlo, David Lemieux and Golovkin. If Golden Boy decides they don’t ever want to match Canelo against Golovkin again, then the amount of interest Alvarez will be able to generate for fights against Saunders, Andrade, Charlo and Lemieux will likely be extremely limited. Charlo would have been a good option for Canelo, but his recent controversial 12 round decision win over 36-year-old Matt Korobov showed that he’s not the fighter that a lot of boxing fans originally thought he was.

As for Golovkin (38-1-1, 34 KOs), De La Hoya says he told Gomez that the third fight between Triple G and Canelo will take place at some point in the future. He doesn’t say when the fight will happen. It could be in late 2019 or maybe 2020. It’s possible that Canelo will face the winner of the upcoming fight between WBO middleweight champion Demetrius Andrade and former world champion Billy Joe Saunders in September to get a chance to capture the last remaining title. That’s if Canelo beats Jacobs on May 4 to win his IBF 160 lb title. Canelo would have three titles [IBF, WBA and WBC] at that stage, and he would only need the WBO belt to complete his collection. The trilogy fight with Golovkin would presumably be pushed to 2020. That’s not a good deal for Golovkin, 36, being that he’s turning 37 on April 8. If the third fight with Canelo is pushed to May 2020, GGG will be 38-years-old. That will make it harder for Golovkin to beat Canelo for sure, but he doesn’t have to take the fight if he doesn’t like having to wait another 1 1/2 to 2 years for it to happen.

Some boxing fans feel that Jacobs is a better fighter than Golovkin, and will present a tougher fight for Canelo than he would in a trilogy fight. A lot of fans felt that Jacobs deserved the victory over GGG in their fight on March 18, 2017. Golovkin won a narrow 12 round unanimous decision. However, Jacobs chose not to participate in the IBF’s second day weigh-in on the day of the fight. Golovkin took part in it, and he had make sure that he didn’t rehydate too much. Jacobs was able to rehydrate without worry after the weigh-in the day before the fight. Golovkin’s promoter Tom Loeffler believes this gave Jacobs an unfair advantage over GGG, because it allowed him more time to rehydrate, and he believes that he had a big weight advantage over Golovkin on the night of the fight. Jacobs still failed to do what he had to in order to impress the judges. Jacobs was knocked down in the fourth round by Golovkin, and he spent most of the time trying to get away from GGG in the first six rounds. The first six rounds looked like a complete shutout in GGG’s favor. In the second half of the contest, Jacobs appeared to win four of the six rounds. The judges gave Jacobs five of the rounds, and that wasn’t enough for him to get the victory.

“When I gave him the others to make the fight with Jacobs, it happened instantly. I mean, it took place instantly,” De La Hoya said. “They agreed to it really fast. It was really a pleasure working with Jacobs and making the fight happen, and they only are warriors. Canelo wants to fight Jacobs, and Jacobs wants to fight the best. We’re going going to see. It’s a good fight come the 4th of May,” De La Hoya said.

Jacobs wasn’t in the position to drag out the negotiations with Canelo the way former IBF/IBO/WBA/WBC middleweight champion Golovkin was for his second fight with Canelo. GGG was in a strong position. Canelo had lost the first fight in the eyes of the boxing public. Further, Canelo was coming off of a six month suspension for testing positive for the performance enhancing substance clenbuterol. Although the first fight between Canelo and GGG was ruled a 12 round draw by the judges in Nevada, Golovkin was seen as the clear winner. Everything was in GGG’s favor for the rematch with Canelo. Jacobs had none of that going for him in the negotiations with Canelo. It would be interesting to know what kind of purse split Jacobs received for the fight. It wouldn’t be surprising if it’s in the 80/20 region.

“Jacobs people were very motivated to make the fight,” De La Hoya said. “Jacobs has been very vocal in wanting to fight Canelo Alvarez and fighting the very best, You have to respect that. Daniel Jacobs is a fighter. He’s a warrior. I mean, we built him, we made him. I remember watching the devastating loss to [Dmitry] Pirog, which broke my heart, and then finding out he had cancer wrapped around his spine,” De La Hoya said.

Jacobs was with Golden Boy earlier in his career. He looked like he was on his way to a bright future until he ran into Dmitry Pirog and was knocked out in the fifth round in 2010. Not long after that, Jacobs had a cancer scare, and that kept him out of the ring for an extended period of time. 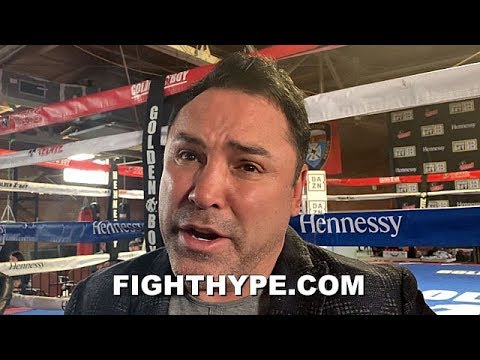 Jaime Munguia vs. Takeshi Inoue – preview, prediction & how to watch »