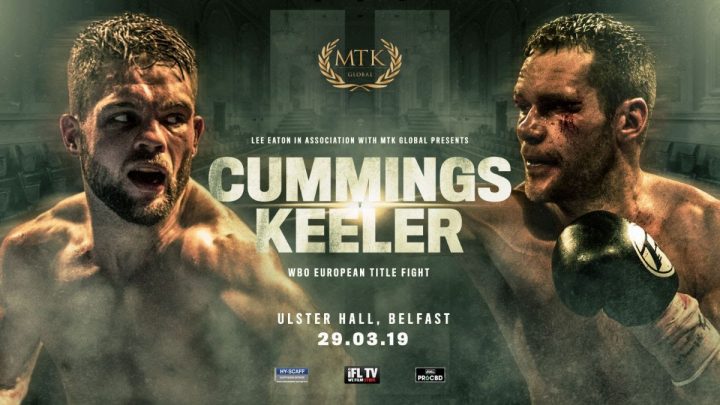 ‘White Chocolate’ (12-0-KO6) enjoyed a rapid rise in 2018 – winning both Celtic and European belts – and is relishing his return having overcome a minor injury problem since his last bout in October.

McCullagh said: “I got beaten at Ulster Hall in my last amateur fight in the Ulster final against Ryan Lindberg, who also beat Carl Frampton, Paddy Barnes, Sean McComb and Luke Campbell. I feel I have to right a few wrongs!

“It’s an incredible atmosphere in there. Everyone gets packed into one small area. My fans travel anywhere anyway so it’ll be loud on the night. I can’t wait for it.

“I haven’t been out since October, when I won the WBO European title, so it’ll be good to get in there and blow off the cobwebs off ahead of some big fights.

“Conrad Cummings and Luke Keeler are going to put on a great show in the main event. I’m friendly with both of them and even if I wasn’t, I wouldn’t be able to call a winner anyway. It’s great to be on that card and boxing alongside my good friends.”

Tyrone McKenna will fight in front of his home fans in Belfast at Ulster Hall on March 29 – live on iFL TV.

‘The Mighty Celt’ (17-1-1-KO6) was last seen narrowly outpointing Lewis Benson in Glasgow and kicks off 2019 on the undercard of the highly-anticipated WBO European title rematch between Conrad Cummings and Luke Keeler.

McKenna said: “I love fighting in front of my Belfast fans. My last fight was away. I’ll always have masses of support in Belfast and when I’m away, I miss them. They spur me on to fight better.

“I fought in Ulster Hall once as an amateur. I’ve fought in some great places like the SSE Arena but here, the crowd is on top of you and it’ll be a great, great atmosphere. The main event was a great fight the first time and can be even better second time around.

“I have nasty cuts and bruises after every fight but I’ve healed perfectly again. I came into camp reasonably fit and I’m excited to be back in camp after a nice break with the kids at Christmas. I’m already training hard and eating healthy.

“Now my good friend Tyrone McCullagh is with us in camp, there are a lot more worried faces around. He even set fire to my shirt last week. We’ve grown up together and it’s great to have another familiar face in camp.

“I just want Ohara Davies. Now more than ever, I’m more relevant to him. I’ll give him the platform. He had a stinker in his last fight and he’s as irrelevant as he’s ever been. Me calling him out will raise his profile. It’s gone topsy-turvy but I’m a generous man!”

Undefeated Celtic light-heavyweight champion Steven Ward will be back in action in his home city on the MTK Global show at Ulster Hall on March 29.

‘The Quiet Man’ (9-0-KO3) overcame some ugly tactics from Rolando Paredes in October and having healed from injuries sustained in that fight, is delighted by the prospect of performing at the prestigious Belfast venue live on iFL TV.

Ward said: “I’ve healed up now. There was damage than we thought at the time because there was an orbital fracture. I’m 100% now and I’m looking forward to getting back in there. I learned a lot in that last fight.

“There’s nothing like fighting in your home city. Everyone knows it. To fight in the Ulster Hall is amazing. I fought there as a kid but to have a professional show in there is phenomenal. It’s right in the city centre.

“This place oozes boxing history. Years and years and years ago, I have memories of going and watching boxing there as a kid. Now for me to be boxing in there myself is an absolute honour. It’s a beautiful place.

“These MTK Global fight nights are going everywhere. Six shows at the start of the year is unheard of. There’s real quality on them too. They want all their fighters to be active. Now they’ve got the Ulster Hall.

“For where I’m from, the people that support me from Rathfern, Rathcoole and Monkstown – plus the people from where I live now in Taughmonagh – can all get to the venue easily. I’m sure it’s going to be a sell-out and it’s a fantastic bill.”

Joining Ward on the card is team-mate and gym-mate Conrad Cummings, who defends the WBO European middleweight title over his former conqueror Luke Keeler plus Sean McComb, Steven Donnelly and more.

Conrad Cummings will defend the WBO European middleweight title against the man who beat him to the belt last year – Luke Keeler – at Ulster Hall on March 29, live on iFL TV.

Keeler (15-2-1-KO5) outpointed Cummings in the same city in April 2018 before suffering injury; leaving Cummings to claim the vacant crown by beating Ferenc Berki in December.

Now, as MTK Global returns to the proud fight city at the iconic Belfast venue, Cummings and Keeler have very differing opinions on what will transpire in their rematch.

Cummings said: “I’m certain it’ll be different this time around. I lost fair and square against him before and I don’t need to go into why. On March 29, I’ll show what I’m really about.

“I’ve changed lots and made major improvements since that defeat. I’m now settled in with my trainer Jamie Moore and I’m looking forward to putting what we’ve been working on into practice.

“The atmosphere on the night will be electric. It was loud last time but it’ll be double this time. My supporters have stood by me and this win will be for them as much as it will be for me.”

Keeler said: “As far as I’m concerned, it’s still my belt and I’ll put to bed these claims that my first win was simply down to Conrad having a bad night.

“To be honest, it’s been a bit annoying listening to Conrad dismiss my victory. This time, I hope he has a good night so there are no excuses afterwards because either way, I’m going to be going home with the win and the title.

“This is an easy fight to get up for as I know Conrad is a top fighter who’ll have made improvements since that fight but it’ll also be the best ever version of me because I’ve had my first full year training as an athlete under the brilliant Peter Taylor.

“I brought with me a good crowd last time we fought and I’m hopeful this will be another special atmosphere.”

News of the undercard and official ticket availability will be announced in due course.