Thurman hoping to fight Pacquiao next after Lopez 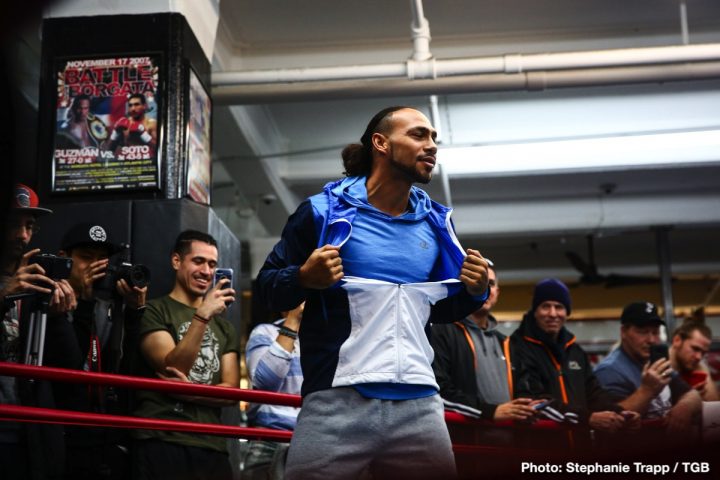 By Sean Jones: WBA Super World welterweight champion Keith ‘One Time’ Thurman (28-0, 22 KOs) is looking past his fight this Saturday night against Josesito Lopez (36-7, 19 KOs) towards a more lucrative fight with superstar Manny Pacquiao (61-7-2, 39 KOs). Pacquiao wants the money he can only get fighting Floyd Mayweather Jr. in a mega-fight. Thurman isn’t highly popular the way Mayweather, and there’s not a lot of money Pacquiao can make fighting him right now.

This is Thurman’s big chance to try and land a fight against the 40-year-old Pacquiao before he retires and walks away from the sport. Thurman can increase his chances of getting a fight against Pacquiao if he stays in the pocket and fights Lopez. Thurman has a bad habit of using ‘circular boxing’ style of fighting, which isn’t the style of fighter that Pacquiao likes to fight.

The last thing Manny wants is an opponent that uses the hit and run style that Thurman commonly employs in his fights. The thing is, Thurman isn’t capable of staying in the pocket for any length of time in his fights, on account of the damage that he takes. Even Robert Guerrero was working Thurman over when he stood and traded with him in the first four rounds of their fight in March 2015.

Thurman, 30, has always wanted to fight Pacquiao and Floyd Mayweather Jr., but neither of them eer showed any interest in facing him. Mayweather is now retired and not interested in fighting boxers. But Pacquiao is with the same adviser as Thurman in being signed with Premier Boxing Champions boss Al Haymon. Pacquiao needs an opponent for his his next fight, and he’s expected to take on one of Haymon’s popular welterweights. Pacquiao has mentioned wanting to battle the winner of the Mikey Garcia vs. Errol Spence Jr. fight. However, Thurman could insert himself in the equation by looking good against Lopez on Saturday at the Barclays Center in Brooklyn, New York.

What could hurt Thurman’s chances of getting the fight against Pacquiao is he’s taking a tune-up level opponent in fringe contender Lopez, who is ranked #7 with the World Boxing Association, and he hasn’t beaten anyone of note since his victory over Victor Ortiz in 2012. Thurman has been out of the ring for two years with injuries, and has been largely forgotten by the hardcore boxing fans. The casual fans likely don’t remember Thurman, given that he disappeared so quickly just when he was starting to win over a few fans back in 2017. If Thurman was fighting a good opponent on Saturday instead of a fringe contender, the boxing world would be paying attention to his fight, but that’s not happening. Pacquiao needs a name for his next fight, and Thurman has been out of the limelight for too long for him to be useful to for Manny.

“Floyd is an intelligent businessman…When they arrive with a proposal of $150 million is when he will respond and it is still difficult for Floyd not to hear a $100 million offer for a performance of 36 minutes,” Thurman said about Mayweather. “If they do half of what they did with Pacquiao in the first, they will still be served.”

Thurman believes that there’s a 90% chance that Mayweather will make a comeback to fight Pacquiao in a rematch, so he’s not counting on him getting a fight against either guy in his next fight. Although Thurman is hoping he’ll get one of those two, he doesn’t believe it’s too likely. Mayweather wants a nine-figure payday when he does come back, and he’s not going to be agreeable to making less than fighting someone who isn’t popular enough to pull in the fans for the pay-per-view buys on SHOWTIME.

There are only two fighters in boxing right now that Mayweather can fight to make a nine-figure payday, and that’s Pacquiao and Saul Canelo Alvarez. There’s no chance that Mayweather will ever fight Canelo again now that the Mexican fighter is fighting at middleweight, and has improved a great deal since the two of them fought each other six years ago in 2013. Mayweather beat Canelo when he was only 22, and not as bulked up as he is now.

The difference in the way Canelo’s physique looked back in 2013 when Mayweather fought him and the way it looks now is dramatically different. Pacquiao is the only guy Mayweather can fight to get a nine figure payday. Thurman feels that Mayweather is going to come back to pick up that big nine-figure payday while he still can. If Mayweather waits too long, he’s going to miss out on his chance to fight Pacquiao. If Pacquiao fights the winner of the Spence vs. Garcia fight, he’s probably going to lose to one of them. A deal for Pacquiao will hurt his popularity in a huge way, making him not worth fighting.

Thurman was out with injuries for the last two years after beating Danny Garcia by a 12 round decision in March 2017. Thurman hurt his right elbow, and that needed surgery to repair. While Thurman was training to get back in the ring, he injured his left hand. That led to more time out of the ring. Now that Thurman is coming back, he wants to fight Mayweather and/or Pacquiao so that he can takeover as the number #1 star in the welterweight division.

The injury problems that Thurman has been dealing with are hopefully behind him for good, because he’s got to get busy with his career if he wants to be seen as a major star at welterweight. If Thurman suffers and injury during the fight this Saturday, then it could give Lopez a chance of pulling off the upset, and walking out of the ring as the new WBA Super World welterweight champion.


« Jorge Linares moving back down to 135