Chris Eubank Jr. Q&A: ‘ This is not a fight that I can afford to lose. I have no other choice – it’s do or die’ 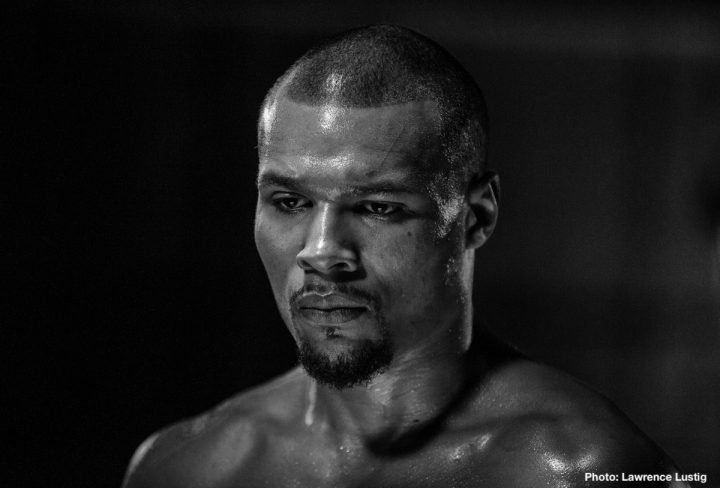 By Ian Aldous: On Saturday February 23rd, two of Britain’s premier super-middleweights square off in a grudge match many years in the making. Former two-time world champion, James DeGale (25-2-1) takes on Chris Eubank Jr. (27-2) in a fight that British fight fans have been hoping to witness for a long, long time. The ITV Box Office presentation from the O2 Arena in London will see a bout that surely leads to another huge fight for the victor and the defeated man’s career in tatters. Earlier this week, Eubank Jr. took some time to talk with me over the phone about next month’s blockbuster British battle.

IA: February 23rd will be your first bout under your new trainer, Nate Vasquez. Please tell me about how you met and decided to work together?

CE: I met Nate in Las Vegas over the summer at Floyd Mayweather’s gym. I’d seen him a couple of times before and I liked how he was training some of the guys in the gym, so I decided to start working with him and we just gelled straight away. We decided to fly him out here to prepare me for this fight and he was over about a month before the New Year, then he had to go home for Christmas and New Year. Now he’s back and it’s all gone very well. It’s been different. It’s taken a lot of getting used to, having a full-time trainer. I’ve never had that before in my career, but I’m noticing the differences and I believe it’ll take me to the next level. I’m in a good place right now.

IA: Will Ronnie Davies and your father continue to be a part of your team?

IA: You’ve not had a trainer this whole time. How might your career have panned out if you’d had someone like Nate since day one?

CE: We’ll never know. I’ve done very well. I’ve had some great fights and great performances regardless of the fact I haven’t had a trainer. I’ve still been able to become one of the most well known and well respected boxers in Britain. Would I have been different? I wouldn’t say so. At this stage of my career now, I’m twenty-nine years old fighting at the elite level, you need all the advantages and help you can get. Now we have that in place.

IA: To me James DeGale hasn’t seemed quite the same fighter since the draw with Badou Jack. Do you think he’s fading as a fighter?

CE: I believe he’s the type of guy that doesn’t rise to the occasion unless he has a livewire in front of him. I believe that his last few opponents, he hasn’t really respected and probably didn’t prepare for accordingly, because of his lack of fear or respect for their boxing ability. With me, he knows that if he doesn’t come 100% – he’s going to get hurt. So, I’m not paying any attention to his last couple of performances. He’s a former Olympic gold medallist, a former world champion, he knows what he’s doing. I’m not taking this fight lightly at all.

IA: Is DeGale a tougher prospect for you than George Groves was a year ago?

CE: I think it’s the same level. In my opinion, he (DeGale) actually beat Groves in their fight even though he didn’t get the decision. I believe he’s just as dangerous, just as much of a challenge as Groves was.

IA: British fight fans have been hoping for this fight for a long time, have you wanted this for a long time too, or is it a fight you could take or leave?

CE: This is a fight that I’ve been gunning for my entire career – since I turned pro I’ve wanted to fight James DeGale. Every time that I’ve seen him at a boxing event or anywhere in the street, I’ve always said, ‘we need to get this fight on, what are you doing?’, because he’s always been ducking and dodging me for years. Some people are saying it should have happened a year or two ago, well, I was trying to get this fight done a year or two ago. It’s going to be one of the best fights of 2019, in my opinion.

IA: There’s been a lot of talk from James about the loser of this fight retiring with nowhere to go. How do you respond to that?

CE: I haven’t even thought about the possibility of retirement or losing. That’s all his own thought process and that’s something I’m not even taking into consideration. It’s not possible, it’s not in my remit to even think the word of retirement, let alone talk about it at a press conference. It was pretty embarrassing to me that he was talking about that the loser retires, that’s not the mindset that you want leading into a fight.

IA: It’s quite a negative mentality, isn’t it?

IA: You’re ranked very highly with the WBA, WBC (top five) and WBO (top ten), will a win earn you a shot at a world title next?

IA: Despite your animosity, do you admire him for taking the fight with you and vacating his IBF title? It’s quite a big deal to vacate something he’d fought a lot of years to attain.

CE: I respect any man who gets into the ring. Do I respect him giving up his title? Absolutely not. No fighter should ever give up their world title belt. It still could have been made if he’d had his world title.

CE: I don’t know the situation, to be honest. Regardless of why he did it, I can’t condone that type of behavior in the sport of boxing. You don’t give up your world title. You defend it until you can’t defend it anymore.

IA: We’ve heard about the infamous sparring story between you two many years ago, what is the true story of that spar?

CE: I’ve said it before and I guess I’ll have to keep saying it because I’m always asked about it.

IA: It’s part of the story of the fight.

CE: Yeah, it’s part of the story. It’s on social media to see. The day I got out of that ring and out of that gym, well, after I got kicked out of his gym, I told everyone what I did, which was that I schooled him. I beat him up for eight rounds and I embarrassed him in front of his teammates. He was extremely unhappy about that and he was very disrespectful to me and my team. That was the reason I decided to go on social media and let everyone know what happened. Usually when I have a good day in the gym, a good spar, you know, that’s just another day at the office – that’s it, nothing more is said about it. I decided to let everyone know that I handled him severely in that ring. At the end of the day, that was a long time ago and we’re both probably different fighters now, I know I am. It’s just going to be fun to see who’s improved and reached the higher levels since then. I believe it’s me.

IA: Being a part of the PBC stable opens many doors for you, could you have taken a fight against a slightly easier opponent in the U.S or was the DeGale fight the only real option for you?

CE: Listen, I’m a big name in the sport. I can get fights everywhere and anywhere. Whether that’s in the States or over here, it’s not hard for me to get fights because of the reputation I have and the numbers that I bring in. This is the fight I wanted. I didn’t want to look back at the end of my career and (say) I never got to fight DeGale, so this is the one I pushed for.

IA: Finally, if I was betting man, which I’m not, and I had to bet on the winner of February 23rd, why would I put that money on Chris Eubank Jr. to win?

CE: Well, because you’d be able to win more money, that’s why. You’re going to lose your money if you don’t put it on me. This is not a fight that I can afford to lose. I have no other choice – it’s do or die. I understand that James is in the same position, but I believe my mentality, my grit and determination is far superior to his, therefore I believe I’ll be victorious on the night.

James DeGale and Chris Eubank Jr will clash at London’s O2 on 23 February in the first major UK event of the new deal between ITV and Haymon Sports’ Premier Boxing Champions.

Full details of the undercard and how to access this ITV Box Office PPV event across all platforms will be announced and made available in due course. For updated and further information, please go to www.itvboxoffice.com

Tickets for the fight go on sale on Friday 4 January at midday to O2 members and to the wider public at midday on Monday 7 January. Tickets available from www.AXS.com and Inner Ringside/VIP Hospitality from www.sportandmusic.co.uk.