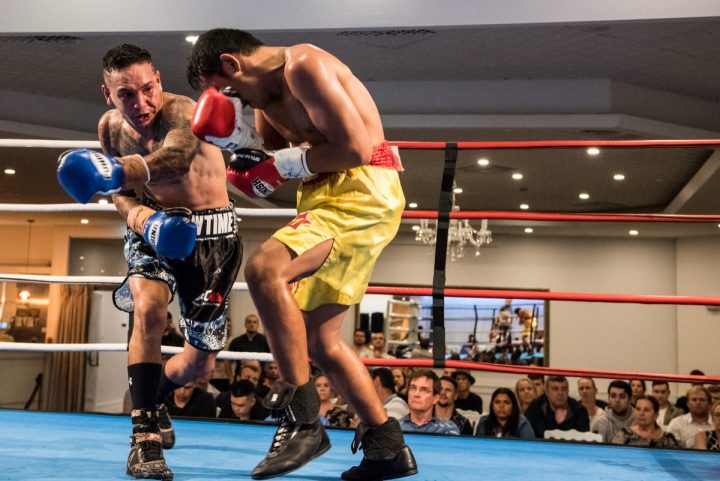 The 30-year-old southpaw showed no signs of ring rust despite a year on the sidelines, pitching a virtual shutout to win by scores of 80-72, 80-72 and 79-73 in the main event of MJA Platinum’s inaugural promotion ‘Inception’.

“We knew he was going to come in tough and put on a hard show,” said Fleming. “I think I controlled the fight. I hurt my right hand in about the fourth or fifth and then I hurt my left hand in the sixth or seventh.

“Uthok came in with his head down and I was bouncing shots off his forehead. Anyone who knows boxing knows that’s one of hardest parts of the body to hit so both my hands are busted up.”

The classy boxer-puncher knows that now is the time for him to capitalise on his unlimited potential.

“I’m looking forward to 2019. Mike Altamura has got some big things planned and I just can’t wait to get back in the ring and show the world what I’ve got.”

The Top Rank-promoted fighter is aiming for a world title shot in 2019 with WBO 130-pound champion Masayuki Ito 24-1-1 (12) of Japan firmly in his sights.

Former featherweight world title challenger Luke ‘Action’ Jackson 17-1 (7) got back in the winner’s circle with a comprehensive eight-round points victory over Indonesian veteran Rivo Rengkung 37-29-6 (14) in a 130-pound contest.

In his first fight back after his brave stand against Carl Frampton in Belfast in August, Jackson had Rengkung on the deck in the seventh round to claim the victory by scores of 79-72 on all three judges’ cards.

Despite injuring his right hand early in the fight Jackson floored Rengkung with a flurry of punches in the penultimate round and had him out of his feet when the final bell rang to end the contest.

“With only one hand it was hard. I didn’t want to throw the right hand and let him know that it was sore,” said Jackson.

“I didn’t really let it go until the sixth but when I did I dropped him shortly after that.” 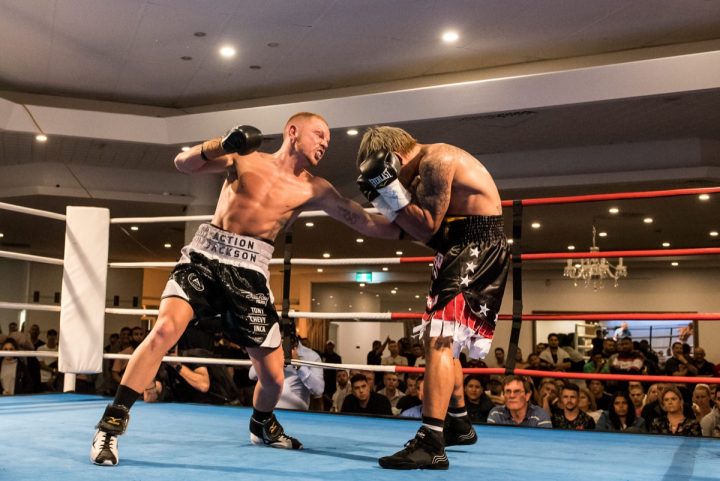 The tough and gritty contest saw both men trade in the trenches to the roar of the enthusiastic crowd but it was the 27-year-old Cronulla prospect who consistently landed the cleaner shots to run away with the win by scores of 79-74 and 77-75 twice. `

“I knew he was a big puncher and I could feel from the opening bell that he was very strong,” said Brubaker. “He had a big overhand right and he was pretty awkward but we got the win and we’re looking forward to bigger challenges in the new year.”

In other results talented prospect Youssef Dib 11-0 (5) took just two rounds to turn back the challenge of Ty Gilchrist 6-8-1 (2) in a welterweight bout scheduled for four rounds.

The 26-year-old Dib, brother of former world champion Billy ‘The Kid’ Dib, forced the Queensland veteran to retire on his stool at the end of the second stanza.

Entertaining junior welterweight Dylan Emery 20-1 (13) stopped Indonesian Bima Prakosa 1-5 (1) in the third frame of a four-rounder in his first fight in more than a year.

The Australian-based Kiwi’s only loss was to world-rated lightweight Kye MacKenzie 20-2 (17) in a competitive four-round brawl for the national crown two years ago.

Lauryn Eagle 20-4-1 (12) logged her twelfth straight win with a third-round stoppage of Thailand’s Ratsadaporn Khiaosopa 0-11 in a four-round fight.

Former Australian title challenger Antonakos was having his first fight back after almost a decade out of the ring.

At cruiserweight Ben Sila 4-0 (1) stopped Stuart Stokes 0-8-2 in the second round of a four-round bout with the corner throwing in the towel after a body shot.

In a light heavyweight contest Humzah Khalid 3-0 (2) stopped Zac Cotton 0-2-1 in the second round of a four-round bout.

Super bantamweight Shwan Kader 2-1 was upset by Dedi Elite 1-1 (1) when he was his corner threw in the towel in the third frame of a four-rounder.

Undefeated super featherweight contender Paul ‘Showtime’ Fleming 26-0 (17) is a proud indigenous boxer originally from the cane-cutting town of Tully in Far North Queensland. The 30-year-old represented Australia at the 2008 Olympics in Beijing, China in the featherweight division. The 2006 World Junior Championships bronze medallist turned professional in 2008 and moved to Sydney two years later to train under acclaimed coach Billy Hussein at the Bodypunch Boxing Gym. The classy southpaw is a clever boxer-puncher with a strong finishing instinct that has seen 68% of his opponents fail to hear the final bell. Fleming is promoted by leading American promotional firm Top Rank where he has been a stablemate of modern-day legends Manny Pacquiao and Miguel Cotto. He is managed by Dubai-based international management firm MTK Global.

Former amateur standout Luke ‘Action’ Jackson 17-1 (7) is a world title contender in the featherweight division. The 33-year-old Tasmanian compiled an impressive record of 113-32 in the unpaid ranks, earning himself a bronze medal at the 2006 Commonwealth Games in Melbourne at featherweight and captaining the Australian boxing team at the 2010 Commonwealth Games in New Delhi, India and the 2012 London Olympics where he competed as a lightweight. A late starter in the sport, Jackson didn’t pick up the gloves until he was 18 but displayed enough natural talent to come third in the Australian titles in his first year of competition, claiming the national crown in his second year. In August Jackson travelled to Belfast, Northern Ireland to challenge interim WBO featherweight champion Carl ‘The Jackal’ Frampton 26-1 (15) at Windsor Park, losing his first professional contest to the former two-division world champion when his corner threw in the towel in the ninth. A smooth boxer not afraid to mix it up on the inside, Jackson is on the comeback trail after his lone career loss. He is trained by Billy Hussein and managed by Mike Altamura.

Welterweight prospect Jack Brubaker 15-2-1 (7) has carved out a name for himself as the most exciting fighter in Australia. A later starter in the sport, Brubaker has often had to rely on his uncommon toughness and tenacity to overcome his lack of ring experience. It is this crowd-pleasing style that has earnt him a legion of fans and seen him claim the OPBF and WBC Youth titles early in his career. In his last outing Brubaker turned the tables on experienced Englishman Tyrone Nurse, 35-3-2 at the time, outboxing the boxer to earn a 12-round unanimous decision win. The 27-year-old from Cronulla was unlucky to be stopped on cuts in six rounds by Toowoomba’s Kris George in their fight for the Commonwealth welterweight title last year in a fight that Brubaker was leading 50-46 on one of the judges’ scorecards. Under the guidance of Mike Altamura and MTK Global alongside highly-qualified trainer Graham Shaw – who guided Daniel Geale to the unified middleweight championship of the world in Germany – Brubaker now has the team around him with the skills and experience to take him right to the very top.

MJA Platinum turns the prospects of today into the superstars of tomorrow. The brainchild of acclaimed boxing manager Mike Altamura, MJA Platinum promotes boxing shows across the length and breadth of Australia with a view to discovering and promoting the best talent from Down Under on their way to world championship glory. The Australian-based company is dedicated to providing development pathways from professional boxing debut through to world championship level. With a new and innovative approach to boxing promotion and management, MJA Platinum is uniquely placed to deliver world title opportunities to the world’s best boxers. This is boxing – like you’ve never seen it before.