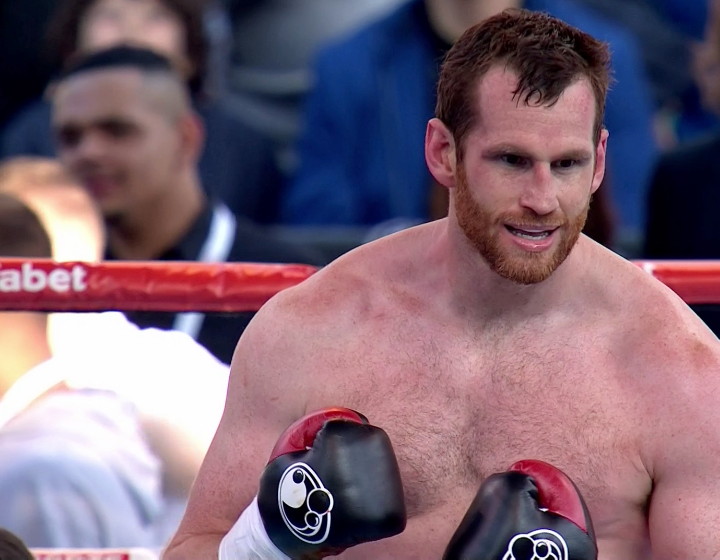 By Jim Dower: Heavyweight David Price (23-6, 19 KOs) scored a quick 4th round stoppage victory over journeyman Tom Little (10-7, 3 KOs) on Saturday night on Sky Box Office at the O2 Arena in London, England. Price hurt Little with a hard right hand in the 4th that caused him to stagger slightly. The referee then jumped in and called a halt to the fight.

Afterwards, Little, 31, was furious at the stoppage, because he felt he could continue fighting and wasn’t badly hurt enough for the bout to be stopped. It looked like Little wasn’t that badly hurt, but the referee decided to play it safe by stopping the fight. Price, 35, didn’t look too happy at the quick stoppage either, but he understood the reasons for it.

It’s a good thing for Tyson Fury that this referee wasn’t working his fight against World Boxing Council heavyweight champion Deontay Wilder earlier this month, since he would have surely stopped the contest in the 12th round after Tyson was dropped from a combination from Deontay.

“The fans thought it was an early stoppage,” Price said to Sky Sports Box Office after the fight in talking about his quick KO win over Little. “I didn’t want to see him in a heap on the floor. I fear for him, because he’s a fighting man and he didn’t want to get stopped in that fight.”

You never know what the outcome would have been had the referee had let the fight continue. Price had Christian Hammer in worse shape than Little was last year in getting dropped in round five. To his credit, Hammer rallied after Price punched himself out in the fifth. Hammer came back and stopped Price in the 7th. Could such a thing have happened tonight? We’ll never now for sure. The referee eliminated any chances Little might have had in staging a comeback with his quick stoppage.

Not surprisingly, Little is asking for a rematch with Price. Whether he gets one or not is unclear. It might be a waste of time for Matchroom Boxing promoter Eddie Hearn to put Price back in with a journeyman like Little on an undercard. It would be better off for Hearn to match Price against one of his favorite fighters in Dave Allen. That would be an interesting fight. Putting Price back in with Little might result in similar situation. The shot that Price hurt Little with would be there for him all night long no matter how many times they fight. Price fighting a journeyman in consecutive fights isn’t where he needs to be taking his career right now. Price wants to get the bigger fights, and he won’t be able to do that if he ties himself down fighting Little repeatedly.

“At least give me that chance, I’ve worked hard as well as David worked hard,” Little complained after the fight to Sky Sports Boxing Office. “I’m heartbroken. I would love nothing more than to do it again.”