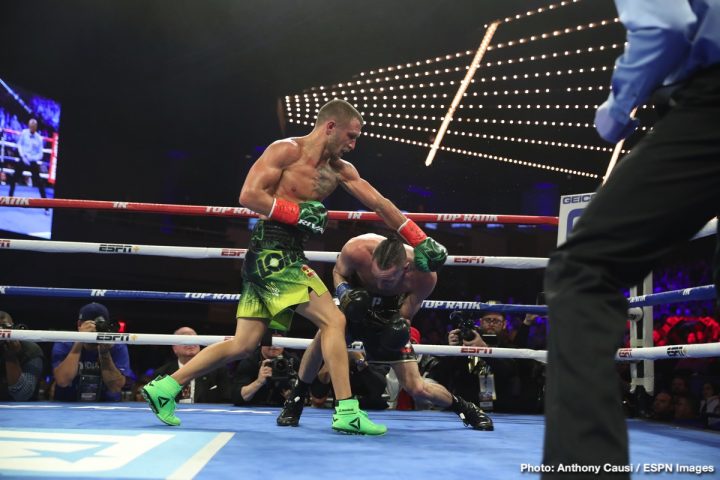 Lomachenko connected on 240 of 738 shots for a connect percentage of 33, according to CompuBox. For his part, Pedraza landed 111 of 931 punches for a connect percentage of 12. The punch stats were titled in Lomachenko’s favor, but he didn’t land a lot of shots either. The ones Lomachenko did land weren’t big shots. Pedraza tried different things in the fight to be competitive, but none of them worked any length of time. Pedraza briefly gave Lomachenko problems in the 4th when he turned southpaw, but the Ukrainian quickly adapted to what he was doing. In the 10th, Pedraza started focusing on throwing painful looking body shots, but Lomachenko responded in the 11th by knocking him down twice. It looked like Lomachenko was willing to coast, and do just a little more than Pedraza in each round to earn the decision. One got the sense that Lomachenko was not interested in pushing himself to get the knockout.

It wasn’t the exciting fight that boxing fans were hoping to see between Lomachenko and Pedraza. It was more of a dry technical fight with a lot of jabbing, feints, and feeling out rounds. It took Lomachenko until the 11th round before he finally started letting his hands go with conviction. It immediately paid off for Lomachenko with him knocking Pedraza, 29, down twice in the 11th round. In the 12th, Lomachenko went back to boxing, and the two lightweight champions finished on their feet.

“It was my dream to unify titles,” Lomachenko said after the fight. “It was my next goal. I can now focus on my next chapter.”

Lomachenko now says he would like to fight a unification match against WBC lightweight champion Mikey Garcia (39-0, 30 KOs) in 2019. However, Garcia is moving up to welterweight to challenge IBF champion Errol Spence Jr. (24-0, 21 KOs) on March 16. The World Boxing Council is allowing Garcia to move up to 147 to challenge Spence without stripping him of his WBC lightweight title. But even when Garcia moves back down to lightweight, there’s no guarantees that a fight between him and Lomachenko will get made. They both fight on different networks, and they’re managed by different people. That makes it unlikely the two will face each other.

“Maybe next year, we can make a fight with Mikey Garcia,” Lomachenko said.

The more realistic fight for the 30-year-old Lomachenko is for him to fight the winner of the Isa Chaniev (13-1, 6 KOs) and Richard Commey (27-2, 24 KOs) fight for the IBF lightweight title. Commey and Chaniev will be battling it out on February 2 for the vacant IBF lightweight title that Garcia recently gave up after beating Robert Easter Jr. by a one-sided 12 round unanimous decision last July to temporarily capture the belt. Garcia would have likely held onto the IBF title if not for the International Boxing Federation ordering him to defend it against Commey. Mikey wasn’t interested in doing that, so he vacated the IBF title in pursuit of bigger and better things against Spence.

There’s also a possibility Lomachenko could face super featherweight Miguel Berchelt if he moves up in weight from the 130 lb weight class to 135 to face him. Berchelt is one of the best fighters in the super featherweight division where he holds the WBC title. That’s a fight should have happened when Lomachenko was fighting in the super featherweight division. Boxing fans wondered why Lomachenko was wasting his time fighting the likes of super bantamweight Guillermo Rigondeaux, Miguel Marriaga, Jason Sosa, Nicholas Walters and Roman ‘Rocky’ Martinez. Berchelt is arguably a far better fighter than any of those guys right now. Top Rank could have taken all the money they paid those five fighters and put it into paying Berchelt to fight Lomachenko, and he would have gained a lot more fame and credibility from beating him than those past their prime guys.

One way for Lomachenko to get the biggest challenges would be for him to forget about wasting his time continuing to fight opponents that the boxing world doesn’t care about. Instead, move up to 140 and/or 147, and face the likes of Regis Prograis, Jose Ramirez, Josh Taylor, Maurice Hooker, Kiryl Relikh, Adrien Broner, Adrian Granados, Sergey Lipinets, Yves Ulysse, Manny Pacquiao, Danny Garcia and Shawn Porter. Even if Lomachenko lost to some of them, he would make more noise in the boxing world than he currently is in beating the likes of Pedraza, Marriaga, Martinez and Walters. Lomachenko is making the same mistake Terence Crawford has been making in fighting the wrong guys that are doing nothing in taking his career to the next level. Lomachenko has to take some chances with his career by fighting better opposition. He might lose to some of them, but he’ll still be better off than where is is now fighting guys that the casual boxing fans have never heard of and don’t care about.

Unifying the lightweight division would be a nice accomplishment for Lomachenko, but if it means that he’s going to have to sacrifice 2 to 3 years in doing it, you have to wonder if all the effort sacrifice is well worth it. The lightweight division is not a popular one. Lomachenko already beat arguably the third most popular fighter at lightweight in Jorge Linares last May. Mikey Garcia is perhaps the most popular fighter in the division right now in terms of U.S boxing fans. That’s not a knock on Lomachenko. He’s just not someone that attracts the same kind of attention Mikey does when he fights. It probably won’t be worth it for Lomachenko to wait around, hoping he can get a fight against Mikey, and putting effort and time into winning the IBF lightweight title in beating the winner of the Commey vs. Isa Chaniev. Those are not household names in Northern America, and Lomachenko will likely get about as much attention in beating the winner of that fight than he would in facing some unknown journeyman. Lomachenko needs to focus on winning titles where it really matters, and that’s at 140 and 147. If Lomachenko doesn’t have the confidence to fight in the light welterweight and welterweight divisions, then he can stay where he’s at and continue to beat the likes of Pedraza and Commey.

The two time Olympic gold medalist Lomachenko was coming off of shoulder surgery on his right shoulder following his 10th round knockout win over former WBA lightweight champion Jorge Linares on May 12 in New York. Lomachenko suffered a torn right labrum in his shoulder after dislocating it. Although Lomachenko was able to continue fighting and score a stoppage in the 10th with a left to the body, the victory was a costly one for him. Lomachenko needed surgery afterwards, and was out of the ring for seven months. When Lomachenko did return to the ring lat Saturday night against the light hitting Pedraza, he played it safe, not attacking him hard, and mostly just boxing for the majority of the contest. There was no sign of Lomachenko favoring his right hand, but he clearly wasn’t sitting down on his shots the way he’d done in the past.

“I am happy with my performance,” the Puerto Rican Pedraza said. “I went 12 rounds with the best fighter in the world. I knew what we were going up against. I thought it was a close fight until the knockdowns. At the end of the day, I am proud of what I did.”

After the fight, Top Rank boss Bob Arum said he’s interested in possibly matching Pedraza against unbeaten Teofimo Lopez. That’s probably not a good match-up for Pedraza, as Lopez is a big puncher and a guy that could be too much for him. Pedraza was blown out in 7 rounds last year by Gervonta ‘Tank’ Davis in January 2017. Although Lopez is not in the same talent class as Davis, he’s still a big puncher with a lot of talent. It’s going to be a really tough ask for a technical fighter like Pedraza to try and deal with his punching power and youth.