Lomachenko fails to impress against Pedraza 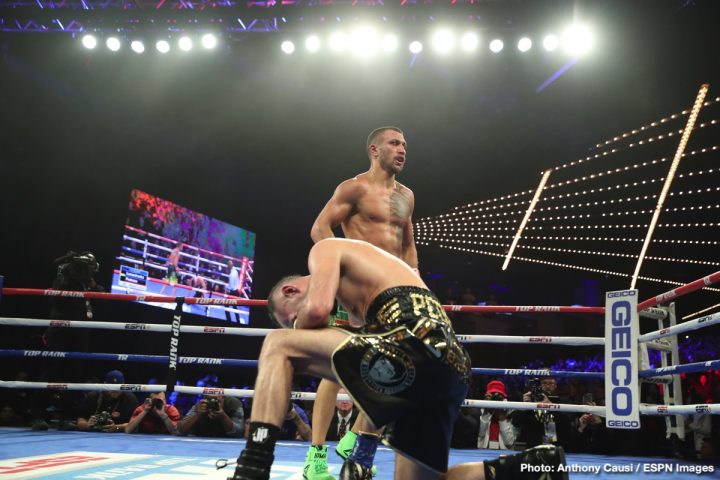 By Dan Ambrose: For the second consecutive fight, Vasyl Lomachenko failed to impress in beating Jose Pedraza by a 12 round unanimous decision last Saturday night on ESPN. World Boxing Association Super World light weight champion Lomachenko (12-1, 9 KOs) earned a 12 round unanimous decision win over WBO champion Pedraza (25-2, 12 KOs) to add another lightweight title to his collection, but it wasn’t pretty.

Lomachenko failed to thrill the Madison Square Garden crowd in New York. At times, there was grumbling from the boxing fans that had come to see the fight, thinking that it would be an exciting contest to watch live. It wasn’t exciting. It was about as interesting as watching paint dry in the afternoon sun. Fans expected more of Lomachenko, 30, in facing Pedraza, as this was a guy that was obliterated last year by 23-year-old Gervonta ‘Tank’ Davis in seven rounds. Coming into Saturday’s Lomachenko-Pedraza fight, the general perception from fans was that Lomachenko is a better fighter than Gervonta, and would beat him if they ever fought. But right now, it’s hard to say that Lomachenko would win that fight. Davis looked world’s better in beating Pedraza than Lomachenko did. It’s possible that age and injuries are starting to catch up to Lomachenko. Although he’s not old at 30, his performances lately are looking like a fighter that on the downside of his career.

Lomahenko won the fight last Saturday by the scores 117-109, 119-107 and 117-109. The scoring was fair. Pedraza was over-matched, and failed to do anything to rate the win. However, Pedraza was far more over-matched in his loss to Gervonta Davis than he was against Lomachenko.

“I said before the fight, I thought Pedraza, with his style, would give Loma some trouble,” Top Rank promoter Bob Arum said via ESPN.com. “Pedraza fought a very intelligent fight and showed courage and smarts, and I just really enjoyed the fight.”

The boxing fans didn’t seem to enjoy the Lomachenko vs. Pedraza fight near as much as Arum did unfortunately. There are styles that the boxing fans love to watch, and then there are guys that put the fans to sleep. Gennady Golovkin has the style that the fans like to see with his slugging style. Some fans have complained about Guillermo Rigondeaux’s technical style of fighting. Even Arum has spoken about how the network executives weren’t thrilled with Rigondeaux’s style of fighting in the past. But if you look at the way Lomachenko has been fighting, he’s pretty much right up there with Rigondeaux in his failing to entertain the boxing fans with his defensive style of fighting.

The crowd of 5,312 didn’t have much to get excited about last Saturday until Lomachenko knocked Pedraza to the canvas twice in the 11th round. The cheering soon stopped though, as Lomachenko went back to his technical boxing style in the 12th round to finish the fight without even trying to KO Pedraza.

Lomachenko was fighting another world champion last night in Pedraza, and he was coming off of shoulder surgery on his right shoulder. However, it still wasn’t an impressive performance for the second time in a row for Lomachenko. When a boxer starts fighting in pattern of dull fights, it suggests that this is the way they’re going to be from here on out. Top Rank wants Lomachenko to become a star, but he’s not going about it the right way with his method of fighting. It might take something to shake Lomachenko up. One way for Top Rank to snap him out of his boring style of fighting is to put him in with a knockout artist like Gervonta, Regis Prograis or Manny Pacquiao. However, Lomachenko has the last say so in who he faces. If Lomachenko isn’t willing to fight the exciting fighters that will force him to fight all out to win, then the boxing world will wind up getting the similar lackluster fights that they witnessed last Saturday night with the Lomachenko-Pedraza fight.