Jacobs wants Canelo fight on May 4th in Las Vegas 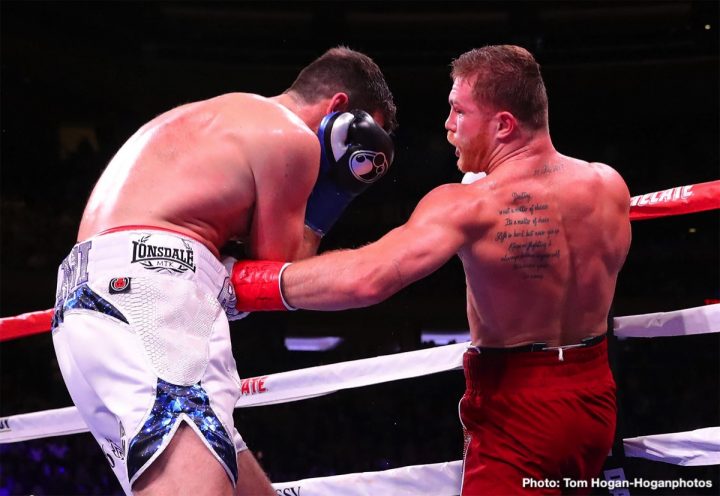 By Jeff Aranow: Daniel Jacobs (35-2, 29 KOs) says Saul Canelo Alvarez has “unfinished business” at middleweight, and he sees himself as the ideal opponent for him to fight when he does return to the division in his next fight on May 4 at the T-Mobile Arena in Las Vegas, Nevada. Jacobs is a slight step up from Canelo’s opponent from last Saturday night in Rocky Fielding, but not that big of a step up.

Jacobs lost to Gennady Golovkin last year, and he almost his last two fights against Sergiy Derevyanchenko and Maciej Sulecki. Besides not looking very good in those fights, Jacobs was lackluster in promoting the matches, as he’s not a great trash talker.

Jacobs sounds more like a politician when he speaks than a trash talker. For that reason, it would be difficult to build any kind of momentum for a fight between Canelo and Jacobs. Instead of the fighters creating interest for that fight, it would fall on the laps of the trainers for Canelo and Jacobs. Unfortunately, Canelo’s trainers can’t speak English, so the promotion would need interpreters, and it would be a mess.

If Canelo doesn’t fight Jacobs, then who does he fight? That’s the magical question.

The problem that Jacobs has is Canelo hasn’t fully made up his mind whether he’s even going to return to the middleweight division following his third round destruction of WBA super middleweight champion Rocky Fielding (27-2, 15 KOs) last Saturday night in front of a sold out Madison Square Garden in New York.

The way that Jacobs was ushered into the ring by either Golden Boy or the DAZN officials, it was made clear that he’s the one that is going to be fighting Canelo. Jacobs congratulated Canelo briefly, but that was it. There wasn’t the meeting that we saw between Canelo and Gennady Golovkin in which the two made it clear that they were going to fight each other. Canelo didn’t seem all that enthused at meeting with Jacobs inside the ring, and it appears that he’s not made up his mind that he wants that fight. Someone at Golden Boy or DAZN obviously wants Canelo to fight Jacobs next on May 4, but it doesn’t look like he’s entirely motivated to take that fight next. That doesn’t mean it won’t happen though. Canelo wasn’t motivated to fight Rocky Fielding, and yet he still did it.

If Canelo’s promoters at Golden Boy Promotions are going to pick out his fighters for him from this point on, then Jacobs likely has already been selected by them. If he hadn’t already been picked out, then he would have never been allowed inside the ring last Saturday night. It’s not really a big fight though. Jacobs is barely winning nowadays after taking a lot of punishment in his loss last year to Gennady Golovkin. That loss seemed to take something from Jacobs, as he’s looked depleted ever since, and is not winning the way he used to. Right now, Canelo vs. Jacobs is on the same level as Canelo-Fielding. It’s a mismatch. Jacobs hasn’t beaten a good fighter since his win over Peter Quillin, and he looked terrible in his loss to GGG last year in running from him most of the fight.

The way that Canelo destroyed Fielding, it’s easy to picture him doing the same exact thing to the other fighters in the super middleweight division. Canelo has that kind of talent, and the division is barren of highly talented fighters like himself. If Canelo does make the move up to 168, what will happen is easy to predict. Canelo, 28, will likely bring the entire upper level of the middleweight division over to super middleweight, being that the best guys at 160 will want to follow him for the chance of a big payday. That means there will be a large migration involving the following middleweights to the super middleweight division: Daniel Jacobs, Gennady Golovkin, Rob Brant, Billy Joe Saunders, Demetrius Andrade, Ryota Murata, David Lemieux, Sergiy Derevyanchenko and Maciej Sulecki. It’s just as well for most of those fighters to move up to 168. Their careers will likely be improved due to them no longer having to drain themselves down to fight below their natural weight in fighting in the 160 pound weight class.

“It’s a great thing for his career, I support him in that,” Jacobs said to ESPN.com about Canelo’s win over Fielding to capture the WBA super middleweight title. “But I think he has a lot of unfinished business in the middleweight division, I think I’m the perfect candidate. I’m a world champion now, and that says a lot. I think now the fans want the fight. We’re going to do this, maybe the Cinco de Mayo in Las Vegas.”

There’s less interest in a fight between Canelo and Jacobs than Daniel thinks. The fight would still attract a lot of interest simply because of Canelo. He showed in his last fight against Fielding that he can fight an obscure fighter that the U.S boxing fans had never heard of, and still bring in a massive amount of fans to come see him fight. It doesn’t matter who Canelo fights. He’s the one that boxing fans want to see in North America. Jacobs would be little more than a cardboard prop standing besides Canelo in the promotion of their fight. The fans don’t care who Canelo fights. For that reason, he needs to be mindful of his legacy, so that he can have that at the end of his career. It’s important that Canelo fight good fighters for the sake of his career, but that doesn’t mean he needs to necessarily fight Jacobs next.

Canelo uniying the middleweight division is less important than him taking the best fights. Since he’s already beaten GGG, there’s less of a need to fight him again unless he does something that helps him come back from his 2 poor performances against Alvarez. Jacobs lost to Golovkin, so that makes him a low priority opponent for Canelo. Jacobs is technically a world champion based on his 12 round split decision win over Sergiy Derevyanchenko last October, but he’s not a popular fighter. As long as Jacobs is with DAZN, it’s a fight that can be made for Canelo. Jacobs is with the same promoter as Fielding in Eddie Hearn of Matchroom Boxing USA, so that helps setup a fight between him and Canelo. If Canelo is only going to be fighting guys that are with DAZN, the remainder of his career could become somewhat closed off and limited to a small set of the same fighters. It would be a shame to see Canelo fight Jacobs four of five times simply because he’s one of the handful of DAZN fighters at middleweight. But if that’s how it’s got to be due to Canelo signing an 11-fight deal with DAZN, then the fans will need to brace themselves for a lot of rematches involving the Mexican star.

Canelo’s options at 160 are these fighters:

There’s not much to choose from at middleweight for Canelo’s next fight on May 4, and obviously Golden Boy Promotions CEO Oscar De La Hoya realizes that. Canelo needs to be able to pool from the super middleweight division for him to get interesting fights, because there are none at middleweight. He already beat Golovkin, and the rest of the fighters are limited in talent, not popular, and incapable of hyping a fight.

Canelo’s options at super middleweight are these fighters:

At super middleweight, Canelo has some great options in front of him against the likes of Ramirez, Callum Smith, Groves and Eubank Jr. Those are all excellent fights that would create a lot of interest. Groves lost his last fight to Callum Smith in the World Boxing Super Series tournament last September, but he still is someone that can generate interest in his fights.