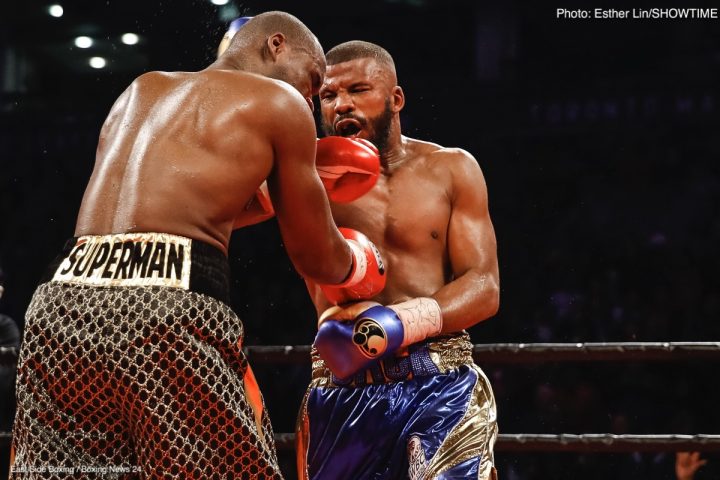 The pay-per-view undercard will also see former world champion Rau’shee Warren taking on France’s Nordine Oubaali for the vacant WBC Bantamweight World Championship in a rematch of their 2012 Olympic matchup that was edged by Oubaali. In the opening bout of the four-fight PPV telecast, unbeaten Jhack Tepora will take on former world champion Hugo Ruiz in a 12-round featherweight clash.

In the main event, Senator Manny “Pacman” Pacquiao, boxing’s only eight-division world champion, will end his two-year hiatus from a U.S. boxing ring when he returns to Las Vegas to defend his World Boxing Association Welterweight World Title against former four-division world champion and must-see attraction Adrien “The Problem” Broner.

Tickets for the event, which is promoted by MP Promotions, Mayweather Promotions and TGB Promotions in association with About Billions Promotions, are on sale now and start at $100, not including applicable service charges, and can be purchased online through AXS.com, charge by phone at 866-740-7711 or in person at any MGM Resorts International box office.

“Not only will the fans witness a tremendous main event, they will get to enjoy three action-packed match-ups that will add another level to the pay-per-view portion of the card,” said Leonard Ellerbe, CEO of Mayweather Promotions. “Both Jhack Tepora and Hugo Ruiz are looking to make a name for themselves in the stacked featherweight division, while Rau’shee Warren and Nordine Oubaali are in the prime of their careers and battling for the WBC title. Mayweather Promotions’ Badou Jack has made an exemplary statement for his career inside and outside of the ring and is focused on further strengthening his resume, while Marcus Browne is looking to showcase his talent on boxing’s biggest stage.”

Jack (22-1-3, 13 KOs) has fought twice at light heavyweight since relinquishing his super middleweight world title to campaign at 175 pounds. The 35-year-old, who was born in Stockholm, Sweden, represented his father’s Gambia in the 2008 Olympics and now lives in Las Vegas. Jack won the super middleweight world title with a majority decision against Anthony Dirrell in 2015 and successfully defended the title three times before he relinquished the belt following a hard-fought majority draw against James DeGale in one 2017’s best fights. In his first bout at 175 pounds, Jack stopped Nathan Cleverly to pick up the WBA light heavyweight title before fighting to a majority draw against Adonis Stevenson in his last fight on May 19.

“I’m looking forward to getting back onto another big stage to perform for my fans across the globe and prove I am one of the best fighters in the world,” said Jack. “I plan to show off my skills with a dominating performance on January 19. I always want to fight the best, and he’s the best that’s available right now. I’m always 100 percent ready and I’m going into this fight stronger, faster and with more experience than ever before.”

The 28-year-old Browne (22-0, 16 KOs) will be taking a step up to face an elite opponent when he battles Jack. A member of the 2012 U.S. Olympic boxing team, Browne moved up the contender ladder in the 175-pound division with brute force and power, scoring three straight knockout victories against Thomas Williams, Jr., Sean Monaghan and Francy Ntetu. Browne, who was born and raised in Staten Island, N.Y., scored a unanimous decision victory over Lenin Castillo in his last fight on August 4.

“This is really an honor and a privilege to have an opportunity to showcase my talents on a big time pay-per-view card featuring Manny Pacquiao and Adrien Broner,” Browne said. “Badou Jack is a championship-caliber fighter and one of the toughest guys you can fight in the light heavyweight division. I’m ready for the step up in competition and focused on being a household name in the sport sooner rather than later.”

Warren (16-2, 4 KOs) is looking to return to the world championship ranks with a victory over Oubaali. The 31-year-old became the first three-time Olympic boxer from the U.S. when he qualified for consecutive Olympic teams in 2004, 2008 and 2012. His Olympic run came to an end against Oubaali when he lost a narrow 19-18 decision in the first round of the 2012 London Games. A southpaw from Cincinnati, Ohio, Warren won the WBA Bantamweight World Championship with a majority decision over Juan Carlos Payano in 2016 and lost the title the next year to Zhanat Zhakiyanov by split-decision.

“This fight means everything for me and it’s about to be the biggest moment of my career,” Warren said. “Not only am I fighting for the WBC belt, but it’s on pay-per-view. When I first won the title it was like winning the gold medal at the Olympics. After I lost the title, it made me much hungrier and I want to get it back even more. I fought this guy in the Olympics, so I’m fighting for revenge. This isn’t the Olympics. This is 12 rounds and I don’t think he’s fought anybody like me. I have no choice but to put it all on the line on January 19.”

The 32-year-old Oubaali (14-0, 11 KOs), an unbeaten southpaw from Lens, Pas-de-Calais, France, has knocked out his last five opponents. His most recent KO of Luis Melendez on April 17 moved Oubaali up the ranks to position him for a world title shot. Oubaali, who is the sixth of 18 children born in France to parents who are from Morocco, twice represented France at the Olympics, qualifying in 2008 and 2012 when he defeated Warren.

“Many people are waiting for this fight because it’s the second time we meet,” said Oubaali. “I beat Rau’shee Warren at the 2012 London Games in a great battle. In the meantime, Rau’shee captured a world championship and lost it. Right now, I’m the WBC No. 1 ranked bantamweight fighter in the world. It will be a great fight in Las Vegas on January 19 and I intend to beat Rau’shee again to become the new WBC world champion.”

The 25-year-old Tepora (22-0, 17 KOs) has steadily risen up the ranks since turning pro in 2012 and most recently captured the WBA interim featherweight crown with a ninth-round stoppage of Edivaldo Ortega in July. Representing Cebu City, Philippines, Tepora enters his U.S. debut on January 19 with stoppage wins in 11 of his last 12 contests.

“It has always been a dream to fight in the United States,” said Tepora. “I never dreamed that my first fight in the U.S. would be on a card with Senator Manny Pacquiao vs. Adrien Broner. I look forward to a tremendous fight on January 19 and defending my title versus former world champion Hugo Ruiz. As you all know the best rivalry in boxing is Filipino vs. Mexican. It’s going to be a great fight.”

Fighting out of Los Mochis, Sinaloa, Mexico, Ruiz (38-4, 33 KOs) will make his featherweight debut on January 19 after picking up two victories in 2018. The 30-year-old won a super bantamweight world title with a first round stoppage of Julio Ceja in 2016, avenging his previous loss to Ceja in one of 2015’s most exciting fights. He now seeks to position himself for a world title at 126 pounds with a victory against Tepora.

“I expect it to be a good fight because Tepora is undefeated and a good Filipino champion,” said Ruiz. “But I’m ready. I don’t think he can handle my power. I’m going to knock him out. I want to do my best to win the title. I’ve been watching videos of him and I’ve been training hard. I’m really focused on how to beat him. I’m still young, but I’ve got the experience to handle him in this fight.”