GGG met with Haymon to possibly sign with PBC 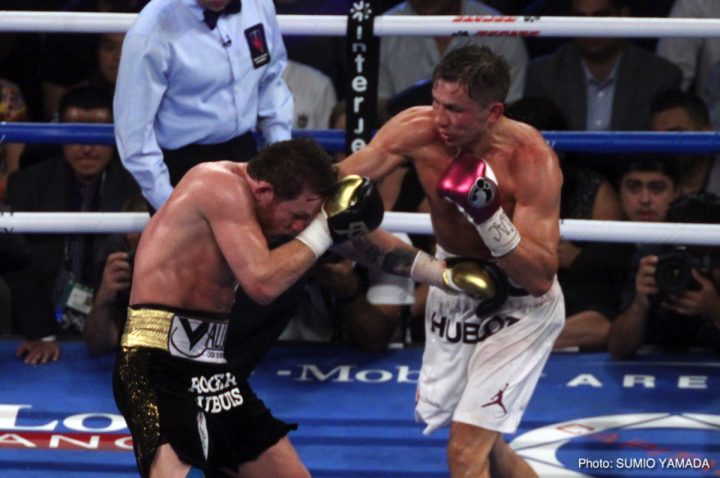 By Sean Jones: Gennady Golovkin met with Al Haymon of Premier Boxing Champions last Saturday night to discuss signing on with PBC, according to Mike Coppinger. GGG was at the Deontay Wilder vs. Tyson Fury fight last Saturday night at the Staples Center in Los Angeles, California. Golovkin (38-1-1, 34 KOs) is coming off of a 12 round majority decision loss to Saul Canelo Alvarez on September 15 in Las Vegas, Nevada, and he’s a free agent now that HBO has decided to give up on televising boxing.

Not only is Haymon looking to ink the 36-year-old Golovkin, Matchroom Boxing USA promoter Eddie Hearn is reportedly flying out to Los Angeles this week to try and persuade Golovkin to sign with DAZN.

Hearn is also interested in meeting with Deontay Wilder’s management to try and setup a fight between him and Anthony Joshua for April 13, although that’s likely the secondary reason for the British promoter’s trip to Los Angeles. The likely primary reason for Hearn to be traveling to the U.S is to try and get GGG to sign with DAZN. Hearn needs Golovkin to be with DAZN in order to for him to fight his middleweights Daniel Jacobs and Demetrius Andrade, as well as for a third Saul Canelo Alvarez vs. Triple G to take place. Hearn needs GGG to be available to fight on DAZN against his fighters. Wilder is arguably a less important reason for Hearn to be traveling to Los Angeles this week, as he’s got Dillian Whyte, Jarrell ‘Big Baby’ Miller and Tyson Fury as options for Joshua to fight on April 13.

“Sources: Gennady Golovkin met with Al Haymon at #WilderFury about joining PBC roster. GGG a network free agent. Meeting went well; Haymon confident he can lure the former middleweight champion over to fight on Fox/Showtime. DAZN/ESPN still aggressively pursuing GGG/Loeffler,” said @MikeCoppinger. “This would obviously be a major play from PBC to bring over one of the biggest stars in the sport. Lots of big fights for GGG over there if this gets done.”

There are a lot of good fights for Golovkin if he signs with Haymon. Besides the contract money, he could continue to fight on pay-per-view, and face the Charlo brothers, Jermall and Jermell and Jarrett Hurd. If Golovkin signs with DAZN, there would be the potential for a third fight against Saul Canelo Alvarez, and he could face Demetrius Andrade and Daniel Jacobs. The big name of that bunch is Canelo. It’s unclear how much interest there would be from the U.S boxing public in a third fight between GGG and Canelo, as a lot of fans have lost faith in the fairness of the judging after two consecutive controversial decisions that took place between the popular stars at the T-Mobile Arena in Las Vegas, Nevada.

The first controversial Canelo-GGG fight took place last year on September 16 at the T-Mobile Arena in which the judges scored the fight a 12 round draw. Golovkin appeared to win easily in the eyes of the boxing public, but the judges scored it a draw. The fans were skeptical when a second fight between the two middleweight stars was announced for September of this year at the same venue at the T-Mobile. Once again, it was a controversial decision with Canelo getting a 12 round majority decision victory. A third between them might be box office poison due to the belief that a lot of fans have that Golovkin will never be given a decision win over Canelo no matter what.

“Eddie Hearn flying out to L.A. this week. He hopes to convince GGG to sign with DAZN during this trip, per sources,” Coppinger said.

If Golovkin signs with DAZN, he would have these fighters available for him to fight:

As this writer mentioned already, Golovkin signing with DAZN would give him one big fight against Canelo, and that’s if GGG wants a third fight. He might be more than a little jaded at this point after the controversy of the first two fights against the Mexican star. Even supposing that Golovkin does get the third fight against Canelo, that’s the only big fight that would be available to him with the current fighters that are inked with DAZN. GGG might find himself looking to fight Golovkin a fourth, fifth and even a sixth time in order to get big money fights. Golovkin won’t make a lot of money fighting Jacobs, Andrade, Lemieux, O’Sullivan, Callum Smith or Saunders.

Golovkin signing with Premier Boxing Champions would put him against the Charlo brothers and Hurd. GGG might be able to continue to be PPV if he inks with PBC, depending on who they have for him to fight. Signing with DAZN would make sense if he’s mainly just looking to get fights against Canelo.

At 36, Golovkin might be more focused on going for the money rather than the glory with what’s left of his career. That would mean that his bet for getting the biggest payday would be for him to sign with DAZN so that he could get one or two more fights against the Mexican star Canelo Alvarez before he decides to retire. It obviously is a major disappointment for Golovkin that he’s failed to get wins against Canelo in their first two fights, but he at least has gotten good money for both of the fights. Canelo will continue to give GGG the most amount of money than anyone else in boxing. The only other guy that Golovkin could get a monstrous payday fighting is Floyd Mayweather Jr., but he’s not going to come back to fight him. That’s not something that Mayweather has expressed any interest in. Mayweather doesn’t want to fight Golovkin. The cash out money is there for GGG if he signs with DAZN and fights Canelo before retiring. Golovkin signing with Haymon will put him in against some very good fighters, but the money might not be great.

ESPN wants to sign Golovkin as well. He’d get some great visibility on ESPN. However, GGG would be limited to fights against Rob Brant, Gilberto Ramirez and Ryota Murata. If money is what GGG is looking to get most of all, he should target Canelo. If there’s no guarantee that Golovkin can get the third fight with Canelo, then he’d be taking a big risk in signing with DAZN. Golovkin probably wouldn’t be happy if he signed with DAZN and discovered that Canelo and his promoters at Golden Boy Promotions want no part of a third fight with him. GGG would then be stuck fighting Eddie Hearn’s Matchroom Boxing USA fighters Andrade, Jacobs, Rocky Fielding and Callum Smith.